But Evers says he’s authorized more Wisconsin guard troops as officials argue over what should be done.

By Melanie Conklin, Wisconsin Examiner - Aug 26th, 2020 04:10 pm
Get a daily rundown of the top stories on Urban Milwaukee 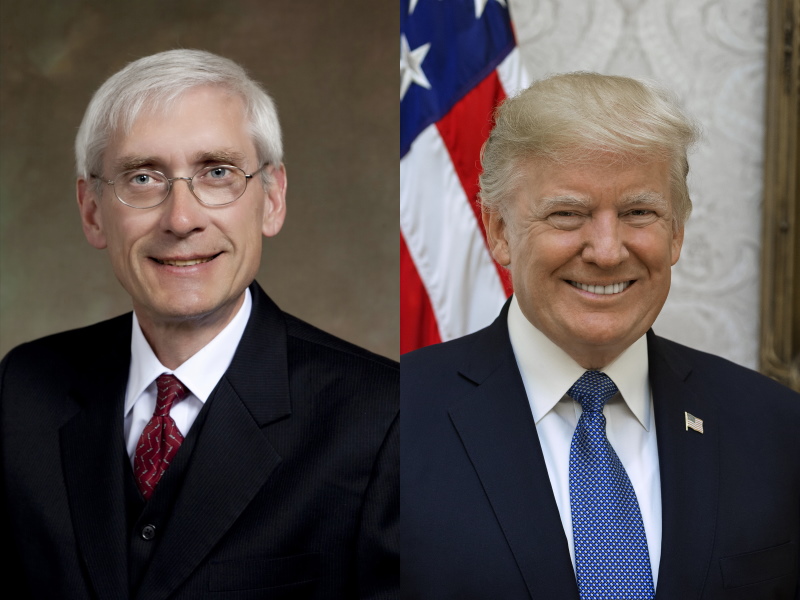 President Donald Trump tweeted early this afternoon that his team had been on the phone with Gov. Tony Evers, who agreed to accept federal troops in Kenosha. Evers, responding via a press release, does not mention Trump, but says he has authorized 500 members of the Wisconsin National Guard to support law enforcement in Kenosha this evening and is “continuing to work with other states in facilitating additional National Guard and state patrol support.”

We will NOT stand for looting, arson, violence, and lawlessness on American streets. My team just got off the phone with Governor Evers who agreed to accept federal assistance (Portland should do the same!)…

Republicans pushed for increased federal intervention in Kenosha via letters to the governor and on Twitter Wednesday morning after a night of violence and two fatalities in Kenosha.

Wisconsin Sen. Ron Johnson, chair of the Senate Homeland Security Committee, said Evers should reconsider the president’s offer of federal troops to quell riots that broke out in response to the police shooting of Jacob Blake, a Black man who was shot seven times in the back in front of his children by Kenosha police on Sunday.

“It is heartbreaking that the violence in Kenosha has now escalated to include the loss of human life,” said Johnson in a statement. “Although it will not guarantee peace, Governor Evers should reconsider his refusal to accept President Trump’s offer to send more personnel to restore order. It is now three days since Jacob Blake was shot. I have repeatedly urged peace, and I renew that call today. Anarchy and chaos will not advance justice, and must be stopped.”

Trump made it clear he was more than willing to send in troops: “Governor should call in the National Guard in Wisconsin. It is ready, willing, and more than able. End problem FAST!” he tweeted Tuesday night.

Governor should call in the National Guard in Wisconsin. It is ready, willing, and more than able. End problem FAST!

White House Chief of Staff Mark Meadows confirmed the administration was offering to bring in additional Guard members and the Department of Homeland Security to “contain property destruction and violence in the city,” according to The Hill.

On Tuesday, Evers said he was increasing the presence of the Wisconsin National Guard “to ensure individuals can exercise their right safely, protect state buildings and critical infrastructure and support first responders and firefighters.”

Posts showing a militia group called the Kenosha Guard asked for “armed citizens to protect our lives and property,” to meet at 8 pm last night at the Civic Center Park, where protesters have also gathered.

Here’s the call for right wing militia to go to Kenosha. #

On Wednesday state Republicans renewed their calls for federal intervention and rushed to ask Trump to intervene with federal forces. Local officials around the country have been reluctant to accept federal forces, which led to increased violence and disruption in Portland.

Assembly Speaker Robin Vos (R-Rochester), speaking on WISN radio, directly blamed Evers for the deaths. “Those people did not have to die, and because of Tony Evers’ actions, they’re dead.”

The comment continues an accusation Vos had been making on Twitter: “I can’t fathom how Gov Evers is literally allowing Kenosha to burn because he doesn’t want to offend the hard-left protestors,” he tweeted. Later he added, “The governor needs to put down his political sword and do what’s right for the state and the city of Kenosha. The city is burning and now two people are dead.”

This week Vos announced he would appoint a task force to look into the problems of police brutality and needed reforms. Task forces generally take many months to issue their reports.

State Sen. LaTonya Johnson (D-Milwaukee) had a strong rebuttal to legislative Republicans on their own inaction, not having met since April 15. She said she had woke up this morning feeling sick to her stomach seeing more life has been lost. “The question for us, Wisconsin, is when are we going to make Republicans do their jobs, or do we continue to sit idly by and watch this state burn to the f–ing ground?”

“Based on conversations we have had with people in Kenosha, and based on published Facebook posts, we fear that 250 National Guard members, even combined with the 100+ mutual aid respondents from surrounding communities will not be enough to overcome the hundreds of people who are claiming to come to Kenosha to riot and destroy Kenosha this evening.”

The legislators also asked for additional law enforcement supplies for both the city and county of Kenosha.

“To the extent the Office of Emergency Management and/or the National Guard can provide concrete barriers, fire-retarding and crowd-dispersing chemical agents, and incident management teams it will help keep Kenosha safe. We also understand through our contacts in Washington that President Trump is ready, willing and able to provide additional resources upon your request. We plead with you to make that request. Time is of the essence.”

Kenosha County Board Chairman John O’Day and Vice Chairwoman Monica Yuhas also sent a letter to Evers on behalf of the County Board, requesting that “1,500 National Guard members with police powers be sent here immediately.” They also requested that Evers come to Kenosha to witness what has been happening there.

Evers has called the state Legislature into a special session on Aug. 31 to address a package of bills that he, the Black Legislative Caucus and others have forwarded on racial disparity and policing.

Lt. Gov. Mandela Barnes appeared on “Democracy Now” with Amy Goodman to say the police response to Blake was unjustified, “There’s no way that any officer could look at that video and say that that’s the way policing should happen,” he says. “We need police departments, sheriff’s departments to acknowledge that there is a real problem in the culture of policing.”

Democracy Now aired bystander video of the shooting of protesters on Tuesday night, although it is difficult to discern. Goodman said it showed a white man with a long gun falling to the ground and shooting at Black Lives Matter protesters as they attempted to disarm him.

Asked about sending in federal law enforcement, as Meadows had offered, Barnes said the Trump administration is suggesting an intervention by the Department of Homeland Security. He said it’s been difficult to fall asleep because he never knows what he’ll see next when he wakes up.

“And so, if Mark Meadows wants to talk facts, then let’s talk facts, because that’s the real deal when it comes to numbers. They can’t send people in there to provide coronavirus testing; how can we trust them to appropriately come in and manage a situation that is as volatile as this one?

“Governor Evers responded to the request of local officials,” he said, adding that short-term calls for troops cannot be the only solution because it is years of political inaction that leads to the events such as what is occurring in Kenosha.