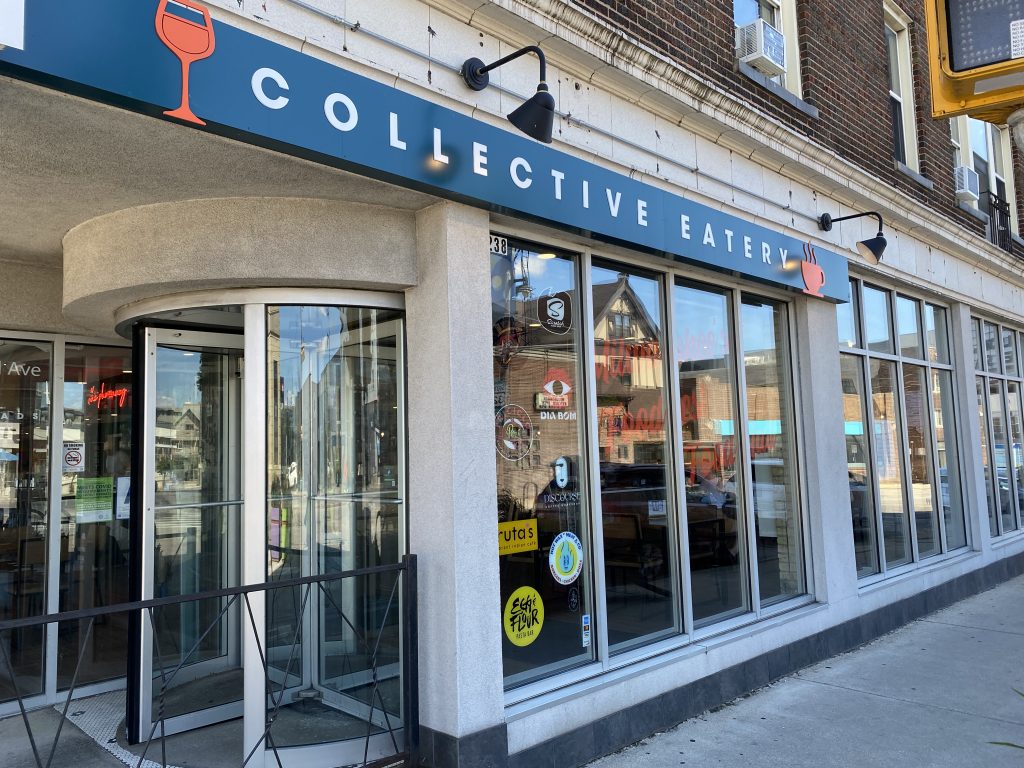 After just over two years of serving pizza by the slice and whole pies at Crossroads Collective, E&F Pizzeria is on the chopping block.

The fast-casual restaurant will serve its final customers on Sunday, Jan. 22.

Chef Adam Pawlak opened E&F in December 2020, filling a vacancy left by the departure of Raw Bar. The mini-pizzeria is a sister concept to Egg & Flour pasta bar, which operates two Milwaukee locations — one in Bay View and the other adjacent to E&F’s stall at the East Side food hall, 2238 N. Farwell Ave.

Pawlak said he had fun experimenting with the concept, which he saw as a pilot project “to test out for future markets,” but he felt the moment was right to move on to other pursuits.

Pawlak also expressed gratitude for the E&F team and supporters of the restaurant.

“My team on the East Side is amazing,” he said. “We appreciate the support from anyone who came through.”

A historic storefront in the heart of downtown’s Old World Third entertainment district will soon be available to lease for the first time in several decades. The flagship location of The Spice House is closing.

Located on the first floor of a three-story building at 1031 N. Martin Luther King Jr. Dr., the long-standing business has operated there for more than six decades and currently occupies 2,450 square feet of first-floor retail space, as well as the building’s 2,000-square-foot basement.

The Spice House was founded in 1957 by Bill Penzey and Ruth Penzey. The herb and spice purveyor now includes five locations (including the soon-to-close Milwaukee storefront) throughout Wisconsin and Illinois.

The Penzeys had three children, a son and two daughters. Their son, William, is the founder of Penzey’s Spices. Their daughter, Patty Penzey Erd, bought the Spice House from her parents in 1992, becoming a second-generation owner. In 2018, she sold the company to current owners Dave Grossman and Dan Yates.

Construction is underway on one of the more unconventional new restaurant complexes in modern Milwaukee history.

Pramoth Lertsinsongserm, co-owner of Japanese and Thai restaurant Rice N Roll Bistro on the Lower East Side and Kin in Wauwatosa, is developing a $2.5 million, two-building restaurant at 2159-2161 S. Kinnickinnic Ave. at the northern edge of Bay View.

A two-story, northern building will contain a dining room, kitchen and second-level deck on the north side of the lot. It will include a portion of the one-story garage structure currently in the middle of the lot, with the remainder of that garage stripped to its frame and becoming an outdoor seating area.

The one-story, southern building will have 1,267 square feet of finished space. A foundation for this structure is now visible.

After a three-year run in the Historic Third Ward, Wahlburgers has shuttered its downtown Milwaukee location.

The Third Ward restaurant was the second Wahlburgers to open in Wisconsin, following a location at The Corners of Brookfield that launched in 2019 and remains in business. The state now has six locations, with another proposed for Janesville. Most are co-located in Hy-Vee grocery stores.

A bar and strip club in the Old North Milwaukee neighborhood is now serving a 20-day suspension, its third city-imposed closure since 2019.

The Milwaukee Common Council voted unanimously on Jan. 17 to temporarily suspend the liquor license for Gold Diggers as part of the tavern’s annual license renewal.

The bar was ordered to remain closed from Jan. 18 at 12:01 a.m. until Feb. 7 at 11:59 p.m. as a result of a four-item police report, which detailed an alleged assault on an employee, a patron overdose and two reports of gunshots (one of which turned out to be false), and neighborhood and aldermanic testimony.

Located at 4750 N. Hopkins St., Gold Diggers has also been the subject of repeated police calls and reports related to loitering, littering, public defecation and urination, loud music and operating outside of legal hours.

The restaurant worker shortage has claimed another casualty.

The restaurant, 10950 W. Good Hope Rd., closed for good in June 2022 due to staff shortages — a problem that has plagued the industry for years and worsened by the pandemic.

“After COVID, there were days that we just, we’d have one or two employees show up some days,” said owner Brian Ward in an interview. “You’d have no cook show up. It was too hard to hire employees.”

Lakefront Brewery‘s newest piece of equipment is also its oldest. After nearly six decades of international travel, a 1960s lauter tun will find its final resting place — on display inside the Milwaukee beer hall.

Once a working part of the production facility, the copper kettle was retired to storage in 2014. Upon its return to the brewery, its new purpose will be decorative rather than functional.

Originally built in 1965, the kettle was first installed in a German brewery, where it remained until 1980. It was later sold to Buffalo Brewing Company, a New York brewery. Five years later, it went to Franconia Brewing Company in Mount Pocono, Pennsylvania. Six months later, in 1999, the kettle went up for auction and was bought by none other than Russ Klisch of Lakefront Brewery.

“We installed it in the year 2000, and used that kettle until about 2014,” Klisch explained. “So that actually was a functional piece of equipment here for many years.”

Combine the elegance of fine dining with the creature comforts of home cooking and you’ll get 1033, a new restaurant and wine bar planned for the Walker’s Point neighborhood.

The new concept, planned for 1033 S. 1st St., will feature fresh seafood such as oysters, clams , mussels and caviar, along with small plates and thoughtful wine pairings.

Owner Robert Levin said he envisions an elevated, yet approachable experience, with all the ease of pulling up a chair to mom’s kitchen island to enjoy a bite of delicious food, a glass of great wine and conversation among friends.

“The kitchen island in your home is probably the most emotional place in the house — it is always surrounded by family, friends, nibbles and drinks,” Levin said. “Through food, wine and ambiance, 1033 will bring together the community in a way that has yet to be explored as it pertains to dining in the great city of Milwaukee.”

Barbecue is one of the oldest cooking methods on earth. Each culture has its own take on the process — at its most basic, slow cooking meat with fire and smoke — making the resulting dishes as diverse as the regions from which they hail.

“Every nationality has a barbecue recipe or a way they barbecue,” Holt said. “So one of my passions is kind of seeing the world and learning different ways that other cultures barbecue.”

Popeyes‘ workers joined forces with Fight for $15 and a Union members and other community organizations Tuesday afternoon to protest unsafe working conditions at two Milwaukee locations for the chicken-focused fast food restaurant.

The protest took place in front of the Popeyes at 2910 W. Capitol Dr., where former employees say they were fired due to unwillingness to work inside the building, which has been without heat for several weeks, they charge.

Workers also voiced concern over broken water pipes and mouse droppings inside of the Capitol Dr. restaurant and another at 6120 W. Silver Spring Dr.

“Popeyes has told workers to come into work when it’s below zero weather, there isn’t any working heat inside the store, and water and ice is everywhere,” said Angela Whitelow, a shift lead at Popeyes. “When workers spoke up about the dangerous conditions and went on strike, we were fired. As a single parent, it’s scary and frustrating to go weeks without a paycheck.”

Known for his spirited dialogue, eccentricity and attention to detail, Anderson debuted his first film, Bottle Rocket, in 1996. He is also responsible for nine others including Fantastic Mr. Fox, Life Aquatic and The French Dispatch. Two more, Asteroid City and The Wonderful Story of Henry Sugar are expected to release in 2023.

The “quirky, immersive” experience is scheduled to run from Feb. 2 through Feb. 5 at The Sugar Maple, 441 E. Lincoln Ave. In addition to the bar’s “head to toe” interior transformation, guests can look forward to a brand new menu of Wes Anderson-inspired cocktails, as well as food from Sojourn Mobile Restaurant. The restaurant will serve guests on Friday and Saturday from 5 p.m. until sold out.

A new cafe serving coffee, acai smoothies and Brazilian brigadieros is set to open this week on Brady Street.

A native of Brazil, Joy spent her 20s in Germany, where she developed a love of chocolate making while helping out in a friend’s shop. Upon moving to Milwaukee, she continued to build on her experience, working at Amaranth Bakery and Cafe and Tabal Chocolate.

All the while, she was refining her brigadiero recipe, sowing the seeds for her future business.

The newest location for Sticky Rice may soon be the only one, as the restaurant plans to close its flagship eatery, 1000 E. Locust St., in Riverwest, transferring locations permanently to its newer, Lower East Side restaurant.

It’s been approximately seven months since the Thai-Laotian restaurant expanded its Milwaukee footprint with a second location at 707 E. Brady St. The restaurant’s proximity to Brady Street‘s foot traffic and heavily-commuted roads led to its immediate success.

The new restaurant also opened with an extended menu and up to 50 seats for dine-in, while the original location, which opened in August 2020 amid the pandemic,  only offered takeout.

When Kell Kirk told his dad that he knew how to cook, the elder Kirk assumed he meant microwave noodles and cereal. You can imagine his astonishment, then, when he watched his son perform at a state-level culinary competition, effortlessly whipping up lamb chops, squash and a deconstructed peach cobbler.

“I was just so impressed with him,” said Kelly Kirk, who is a seasoned industry veteran himself, having gained experience at numerous restaurants throughout Houston, Chicago and his hometown of Milwaukee.

The father-son team is now planning to channel their combined culinary talents into their own restaurant, Zoom Zooms and Wham Whams, a takeout-only fast food restaurant that’s expected to open in February at 3800 N. Teutonia Ave., inside the former Sandwich God.

Sandwich God owner Michael “Bigg Mike” Smith was a friend, said Kelly. He plans to honor the former owner by offering a similar menu at the new restaurant.