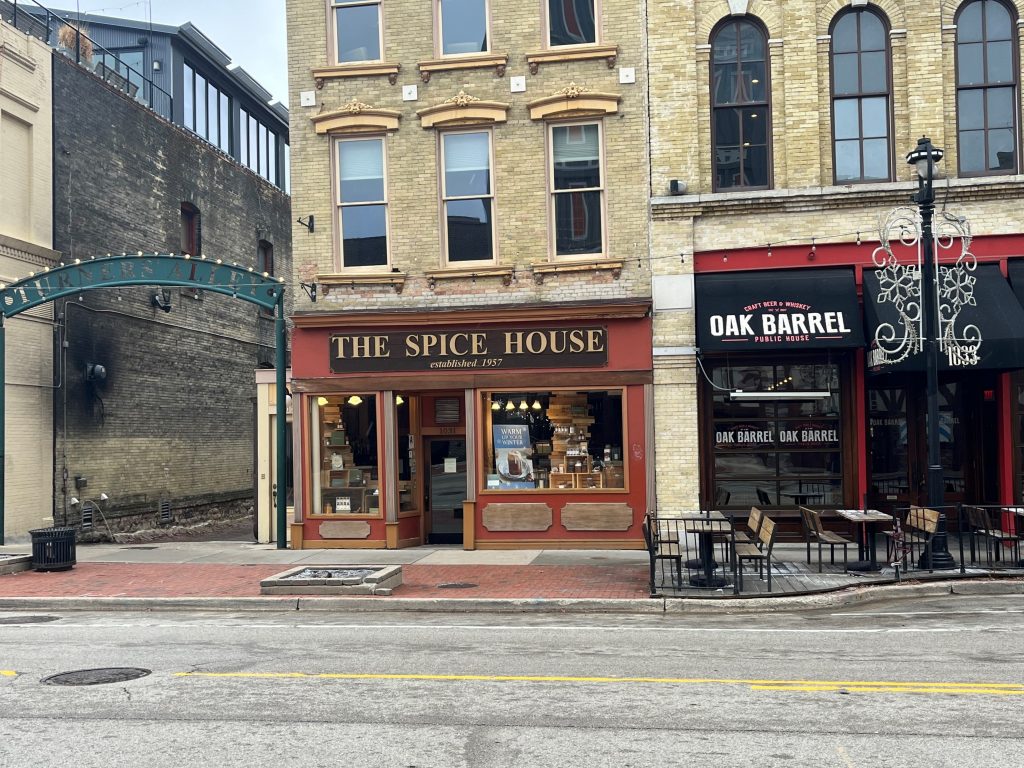 A historic storefront in the heart of downtown’s Old World Third entertainment district will soon be available to lease for the first time in several decades. The flagship location of The Spice House is closing.

Located on the first floor of a three-story building at 1031 N. Martin Luther King Jr. Dr., the long-standing business has operated there for more than six decades and currently occupies 2,450 square feet of first-floor retail space, as well as the building’s 2,000-square-foot basement.

The Spice House was founded in 1957 by Bill Penzey and Ruth Penzey. The herb and spice purveyor now includes five locations (including the soon-to-close Milwaukee storefront) throughout Wisconsin and Illinois.

The Penzeys had three children, a son and two daughters. Their son, William, is the founder of Penzey’s Spices. Their daughter, Patty Penzey Erd, bought the Spice House from her parents in 1992, becoming a second-generation owner. In 2018, she sold the company to current owners Dave Grossman and Dan Yates.

Throughout its tenure, The Spice House remained a constant as the neighborhood evolved around it. In November, the company announced plans to spice up its business model at the King Drive location, introducing a new Spice Bar and Scent experience designed to take customers on a “sensory journey” through a collection of the store’s signature offerings.

Despite its best efforts, the store didn’t receive enough traffic to continue, and the business plans to close its downtown location ahead of the building’s April 1 listing date, according to a representative of the company.

Seth Dehne co-owns the building with his brother Jake Dehne. They purchased the building in June 2021, and also co-own the nearby Lucky Clover, State Street Pizza Pub and Red, White and Blue bars and restaurants.

Seth Denhe clarified that The Spice House is not departing on bad terms.

“Basically, that spot was not generating, from a retail perspective, what some of their other places are. So they decided it was time to move,” he said, noting that the Public Market location is doing well, while a large amount of business has shifted to online sales.

“It wasn’t a situation where we kicked them out,” he added. “We did want them to stay.”

The brothers said they are seeking a long-term tenant for the space — ideally a retail business, restaurant or coffee shop. They are also open to discussions on potential build-outs, and are working with general contractor Beeler Construction.

Get a daily rundown of the top stories on Urban Milwaukee
The building is located steps from Deer District and flanked on either side by Oak Barrel Public House and Turner’s Alley. It also contains three residential apartments above the first-floor commercial space. The building’s prior owners occupy one, while the other two are Airbnb rentals. For that reason, the brothers are not open to a nightclub opening there.