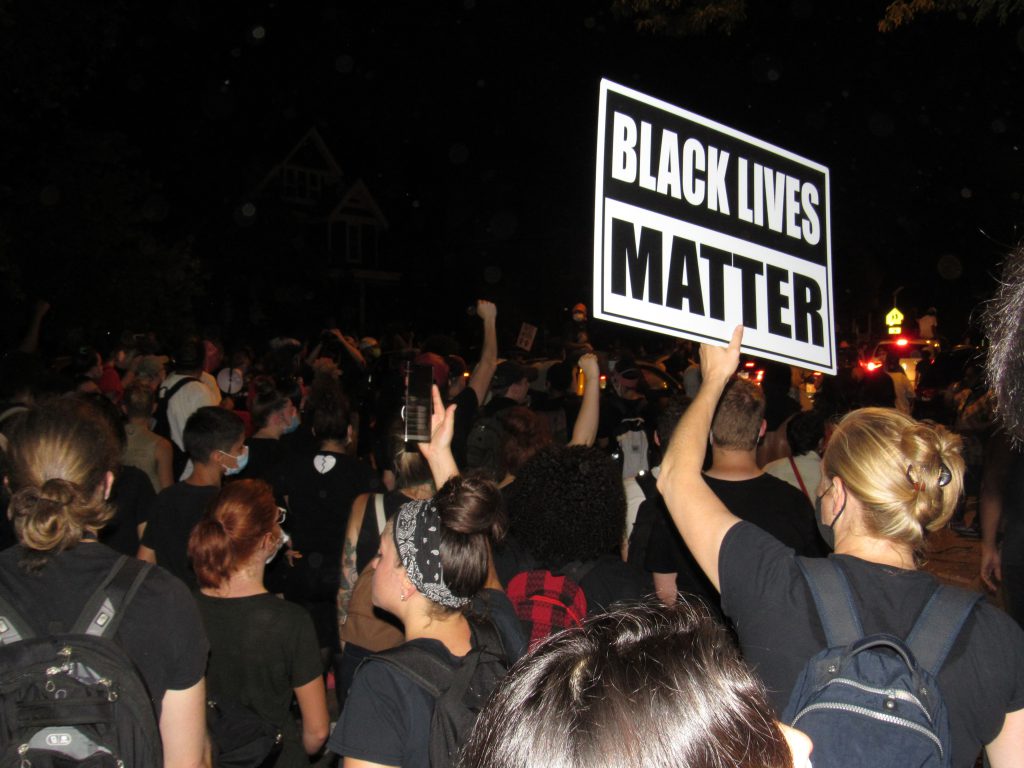 Protesters gather in Kenosha the second night of protests on August 24th, 2020. This was before the clashes with police later that night. Photo by Isiah Holmes/Wisconsin Examiner.

Jacob Blake survived being shot seven times in the back by Kenosha police, but his father says he is paralyzed from the waist down.

Despite that, Blake’s father told the Chicago Sun-Times on Thursday, Blake has been handcuffed to his hospital bed.

Asked at a news conference in Kenosha Thursday afternoon whether that report concerned him, Gov. Tony Evers said, “Hell, yes.” The governor added: “I can’t imagine why that’s happening and I would hope that we would be able to find a … better way to have him get better and recover.”

“Jacob Blake, who is now paralyzed from the waist down after being shot seven times in the back by an officer, lies handcuffed to his hospital bed,” said Wisconsin American Civil Liberties Union Communications Director Alyssa Mauk. “Even after being shot by the police, Mr. Blake continues to be abused by our criminal legal system.”

In separate statements Thursday, the ACLU and a coalition of national civil rights groups called for Kenosha’s top law enforcement officials to resign or be fired, following the police shooting of Blake on Sunday and, two nights later, the shooting deaths of two people for which a 17-year-old self-styled militia member was charged.

The demands were the latest fallout amid mounting criticism of Kenosha law enforcement agencies since a police officer shot Blake seven times in the back on Sunday as he was getting into his car. The shooting, captured by a bystander on video, followed a police call for what was described as a domestic dispute and what some witnesses said involved Blake trying to break up a fight between two other people.

On Sunday and Monday nights, large groups of people gathered in downtown Kenosha, protesting the killings. On both nights, peaceful protests later devolved to rioting that caused extensive damage to the city, both downtown and in the Uptown neighborhood on the city’s near west side. Tuesday night, after a Facebook post from a local militia organizer drew dozens of people with guns downtown to counter the protesters, one of those who showed up shot and killed two people and maimed a third before fleeing.

On Thursday, Kyle Rittenhouse, 17, of Antioch, Ill., was charged in Lake County, Ill., with two counts of homicide and one of attempted homicide, along with two counts of recklessly endangering safety and one of illegally possessing a firearm, an AR-15-style rifle that Rittenhouse had brought with him to the scene. An extradition hearing is scheduled for Friday.

Video footage showed Rittenhouse walking about with his weapon and police giving water bottles to some of the armed people present, at one point telling them, “We appreciate you guys.”

Other footage show the shooting incidents, and in still other videos, Rittenhouse is seen walking toward police after the shootings with his hands up, only to be apparently ignored. He’s alleged to have fled home to Illinois, where he was arrested Wednesday.

At a news conference on Wednesday, reporters questioned Kenosha County Sheriff David Beth and Kenosha Police Chief Daniel Miskinis about their officers’ handling of events Tuesday night before and after the shooting. Beth told reporters sheriff’s deputies would share water with anyone who they came across; neither he nor Miskinis addressed questions about the video conversations between police and the weapons-toting people mingling in the area.

Beth defended the apparent disregard of the shooter immediately after the killings, saying that officers were likely distracted by the chaos of the circumstances.

Miskinis also responded to questions about the shootings by saying that “a 17-year-old from Antioch, Ill., was involved in the use of firearms … to resolve whatever conflict was in place. The result of it was two people are dead.” He also said that “everybody involved was out after the curfew,” and that “had persons not been involved in violation of that, perhaps the situation that unfolded would not have happened.”

In a joint statement, the ACLU’s Wisconsin and national offices said Miskinis effectively “blamed the unidentified victims in Tuesday night’s shooting for their own death.”

The ACLU statement criticized Beth’s response while also citing comments the sheriff made two years ago after the arrests of five shoplifting suspects after a pursuit that ended in a car crash with minor injuries. At the time Beth said there should be “warehouses where we put these people who have been deemed to be no longer an asset.” (Beth later apologized for the remarks after backlash from several local groups including the NAACP.)

Wisconsin ACLU executive director Chris Ott stated Thursday of Beth and Miskinis: “Their actions uphold and defend white supremacy, while demonizing people who were murdered for exercising their First Amendment rights and speaking out against police violence.” Ott called their resignations “the only way to rectify these actions.”

If the two do not resign, the ACLU stated, Evers should fire Beth, and Kenosha Mayor John Antaramian should demand that the city’s police and fire commission fire Miskinis.

The civil rights groups’ statement was signed by national leaders of the NAACP Legal Defense and Education Fund as well as the NAACP, the National Action Network, the National Coalition on Black Civic Participation, the Lawyers’ Committee for Civil Rights Under Law, the Leadership Conference on Civil and Human Rights, and the National Urban League.

It expressed outrage at videos from Tuesday night showing Kenosha Police officers “exhibiting camaraderie toward militia members — who were out in violation of curfew before the shootings — and also seemingly ignoring protesters who tried to identify the shooter.” Miskinis “blamed protesters for the killings,” the statement said, calling that “another example of the racially disparate treatment that Americans across the country have been protesting against since May and for decades before.”

It called on Evers and Attorney General Josh Kaul to “immediately investigate and prosecute these killings, the shooting of Mr. Blake, and the increasingly pervasive issue of armed white militia members confronting and attacking protesters demanding police accountability. They must also demand the immediate removal of Chief Miskinis.”

The statement also called for holding Facebook “accountable for its inaction” as militia groups used it to organize.