But tensions nearly boiled over when counter-protesters disrupted the demonstration. 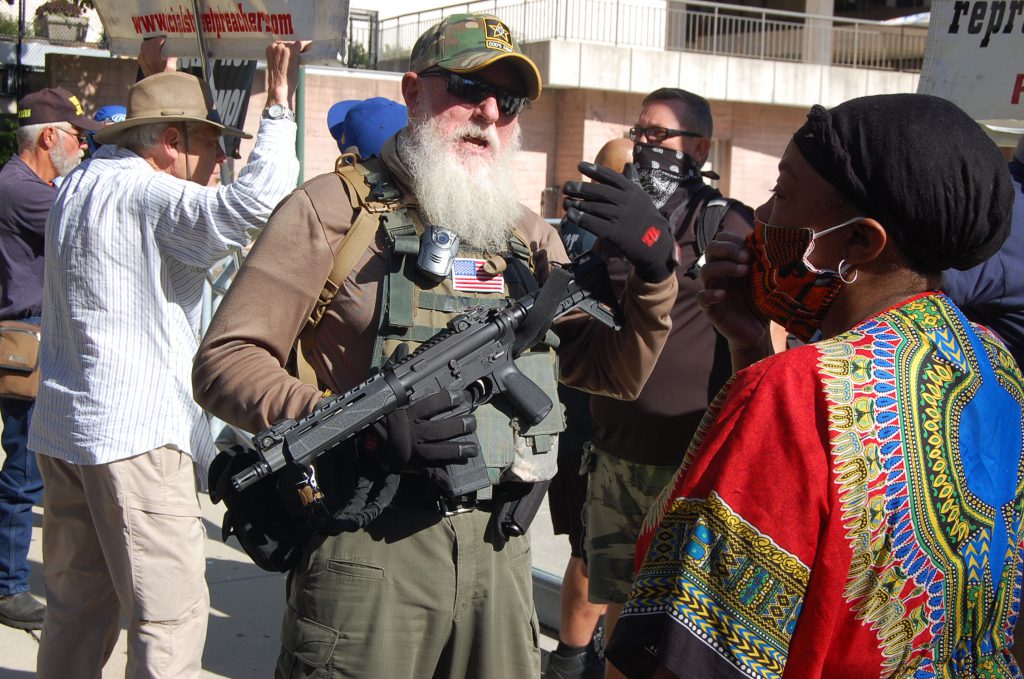 Two hundred people from at least eight different progressive groups met at Red Arrow Park for a march organized by the Coalition to March on the DNC. It was by far the largest protest of the four day convention.

The demonstration began at Red Arrow Park at 5 p.m. The families of victims of police killings were there to speak, they were joined by activists from constituent organizations of the Coalition such as the Milwaukee Alliance Against Racist and Political Oppression and Freedom Road Socialist Organization, and protesters from the Bernie or Vest group that have been a fixture of the DNC.

As the first speaker began, they were drowned out by a counter-protester with a bullhorn. From the other side of the ice rink in the middle of the park, six men carrying banners with homophobic rhetoric had gathered to disrupt the coalition’s protest. Their antagonism drew confrontation from some of the protesters and bystanders.

Wunderlich was one of the speakers interrupted by the counter protest. “You listen to him, and he preaches God, but he doesn’t know God himself because he wouldn’t carry that much hatred then.”

Tubby, a member of the Oneida Nation, was killed in October 2018. “Everyone has their struggles, and he had his own,” Wunderlich said. “That never stopped him from being a good person.”

The park split into two different energies between 5 p.m. and 6 p.m. Families and protesters in the center of the park continued to speak to the press and lead chants. On the other side of the ice rink, tensions rose as one lady argued with the counter-protesters. Some members of Bernie or Vest joined in, trying to drown out, debate or shut them down. Then tactical officers from the Milwaukee Police Department showed up.

With the police and counter protesters gone, the remaining activists walked back to the center of the park to hear the speakers there. Members of the Milwaukee Alliance asked those watching the police line to return as well.

The families of Jay Anderson, Jr., Alvin Cole, Joel Acevedo and Dontre Hamilton took turns speaking through a loudspeaker. Maria Hamilton had spoken to the counter protesters earlier before addressing the crowd. “I walked up and talked to them, because I’m here today because of God’s love and purpose in our life,” Hamilton said. “We’re here to tell the government they’re here to work for the people.”

After 7 p.m., the group had left the park after gathering around 200 people. They marched through downtown streets with chants, drums and calls as they visited areas like Milwaukee Police Department’s District 1, 749 W. State St., and the Wisconsin Center.

At the intersection of Vel R. Phillips Ave. and W. Wells St., Ryan Hamann, the co-chair of the Coalition, spoke in front of the DNC gates. Security personnel watched from the windows of the Wisconsin Center behind him.

The group continued the march after the sun went down, visiting the United States Citizenship and Immigration Services field office then returning to Red Arrow Park, where they began. 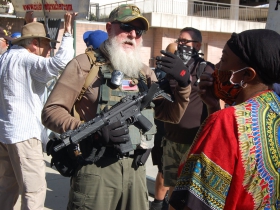 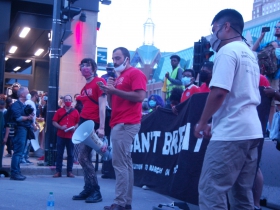 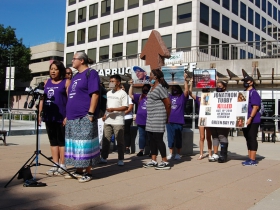 Video of the March