Break the Silence in the Burbs has been protesting police brutality and killings since June. 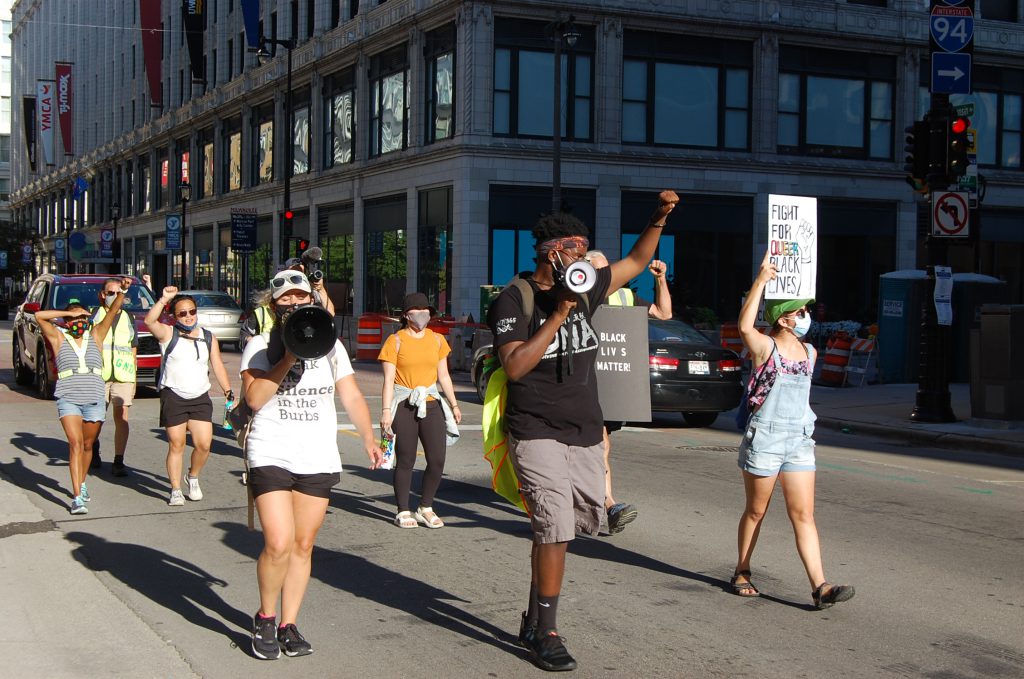 Break the Silence in the Burbs protest. Photo by Ethan Duran.

A small group of protesters with the activist group Break the Silence in the Burbs walked six and a half miles from the Watertown Plank Road Park and Ride in Wauwatosa to the Wisconsin Center in downtown Milwaukee to hold a demonstration at the Democratic National Convention on Wednesday afternoon.

Since protests erupted in June over the killing of George Floyd by Minneapolis Police Officers, members of Break the Silence have marched Port Washington, West Bend and Cedarburg.

William Toney, who was raised in Milwaukee, lead chants for the march. “We crossed through the suburbs and part of the inner city to get to downtown to show that the suburbs are using their voice to support the movement.”

“This isn’t our largest group we’ve marched with,” Toney said, “We still felt that it was important to march no matter the amount of people, because they still hear you.”

The reaction from pedestrians and traffic along the way varied. Some drivers honked their horns in support or cast disapproving glares as they sped by. Like in previous marches, protesters used support vehicles as a barrier between them and traffic. Throughout the two-hour journey, the number of protesters on foot hovered between seven and ten and they managed to block one side of Wisconsin Ave from traffic.

Break the Silence departed from the Watertown Plank Park and Ride at 2 p.m. and walked down to Wisconsin Ave., which was a straight shot east to the Wisconsin Center. The protesters chanted “No Justice, No Silence,” and “I Can’t Breathe” during their march to downtown.

Toney explained that the group had stopped using the chant “No Justice, No Peace,” and replaced it with “No Justice, No Silence” to remove any connotations of violence from their movement.

“A good amount of people have fired back saying these protests aren’t peaceful and that people are looting, when in fact we’re not,” he said. “To clear the message, we changed it. Because being silent is complicit, and when you’re complicit, change doesn’t come.”

A few of the people who joined Wednesday’s march were from the Bernie or Vest movement, a group who believe that Bernie Sanders’ retreat from the 2020 presidential race was due to voter suppression. Sanders, who voluntarily dropped out of the race in April, said that his path to the presidency was impossible.

As the name implies, the followers of the movement adorn themselves with bright yellow vests with “BLM” and “GND” written on them. They have posted themselves at a barrier outside of the fence surrounding the Wisconsin Center for the past few nights. 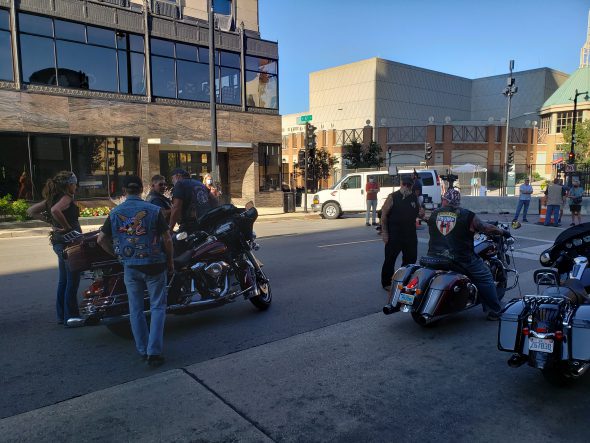 Around 4 p.m., approximately 80 motorcyclists from “Bikers for Trump” arrived at the corner of W. Wisconsin Ave. and N. 6th St. with large flags on the back of their motorcycles. Doug Kienast, a rider from Oshkosh who rode in with the group, said, “We’re big supporters of Trump. We believe, all of us here I’m sure, that he’s doing a great job despite the backlash he’s had.” Former Governor Scott Walker posted on social media that he joined the group in West Bend, where the ride began.

The Break the Silence marchers eventually arrived at the exact same spot, but by then the bikers were gone. The protesters circled around the Wisconsin Center, chanting the names of those killed by police violence, and finally settled at W. Wells St. and Vel R. Phillips Ave. They had briefly shut down a portion of W. Michigan Ave. with their support vehicles and passed Zeidler Union Square, which has been largely empty during the convention.

Outside of the UW-Milwaukee Panther Arena, a separate group of young Black speakers gathered for a discussion on public safety, community and police abolition. The remaining marchers from Break the Silence joined the circle on Vel R. Phillips Ave., effectively ending their march.