With DNC as Backdrop, A Discussion of Black Liberation

Young students and artists talk about racism, police and education. 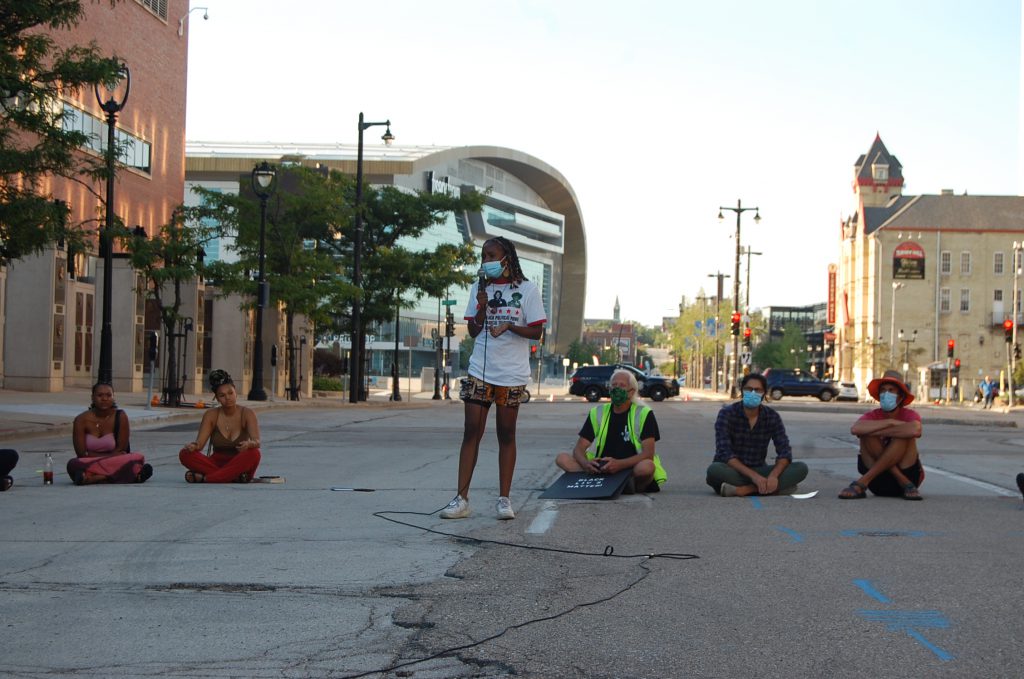 On Wednesday evening, within earshot of the Wisconsin Center, a group of Black students and artists held an open discussion on the abolition of police, racism in American infrastructure and problems with education in Milwaukee.

The group, which had no official name, gathered outside of the UW-Milwaukee Panther Arena on Vel R. Phillips Ave. to be heard by the Democratic National Convention after 6 p.m.

Pedestrians and other activists roving the area were invited to join the discussion, which was amplified through a pair of loudspeakers.

The group passed around a microphone and addressed several questions like, “What is community to you?” and “What does a world without police look like?” The talk wrapped up after 8 p.m., just before former President Barack Obama endorsed his gave his endorsement of former Vice President Joe Biden.

The group, mostly made of Milwaukee locals, shared their experiences going through Milwaukee Public Schools and other city institutions. They described the obstacles to education, healthcare and jobs for the poor in the United States, and how that impacts Black communities twice as hard. They brainstormed solutions to these problems and what a world with those solutions may look like.

Lazabia Jackson, vice president of the Black Student Council at Marquette University, explained that the entire system had to be dismantled for it to benefit Black people again. “When we say abolition, we mean an educational warfare, a medical warfare, an economic warfare. A warfare on Blacks,” he said, “When we speak on abolition, we’re abolishing that warfare.”

Jackson is a MPS graduate. And he criticized the teaching environment he was subjected to. “Teachers would show us so much under the table hate. How could you blame kids that don’t want to come to school? It’s a product of toxicity.”

Tru West is an artist who says she’s just learning about Black liberation. On the topic of education in the circle discussion, she said, “We’re taught to work for other people.”

“We’re not in school to be self-sustained,” she said. “Back in the 1960’s, they had a home economics class where they learned how to cook for themselves. I’ve never had a shop class or a mechanic class or a cooking class. You think about these things and you wonder why.”

“In Black communities, we’re already lacking the basic stuff we’re supposed to learn,” West said. “We barely have enough books. The teacher doesn’t have enough drive to teach us. Kids are bad because they’re going through things at home that no one’s helping.”

Some protesters from Break the Silence in the Burbs, which led a march from Wauwatosa to the Wisconsin Center that evening, joined the circle discussion for almost an hour. Occasionally the Bernie or Vests group would pass by. Inside the Convention, Governor Tony Evers started his speech with his “Holy mackerel,” line.

“The DNC is here, they say they need our vote,” West said. “They’re saying that they care about us, but they don’t know the first thing about what we need as a people.” 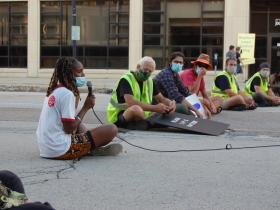 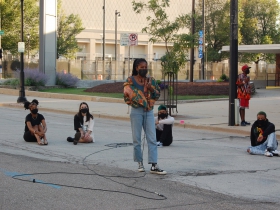 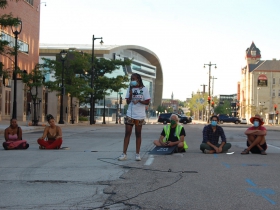