12 Takeaways on DNC Day One

Milwaukee was all but invisible. The format rocked, but Michelle disappointed. 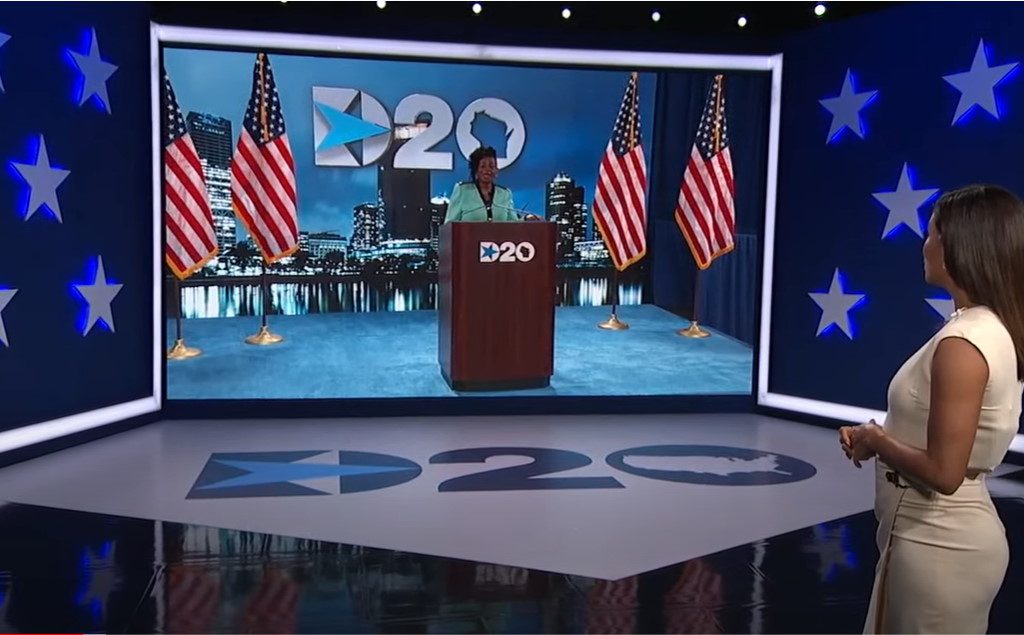 This was going to be Milwaukee’s time in the sun, four days and nights of a nationally televised convention, but the pandemic turned this into a virtual affair that might have been in Any Town U.S.A. The result was unlike any convention we’ve ever seen before. The top takeaways:

1. Milwaukee was all but invisible. There was barely a mention or sight of the city in the two-hour segment televised by CNN and MSNBC. It felt like it was taped in a hermetically sealed studio that could have been anywhere in the world. The main mention of Milwaukee was a welcoming speech by Democratic congresswoman Gwen Moore, who was ebullient if too over-excited for the unforgiving medium of TV. She let us know Milwaukee was named to mean a place to gather which was a nice thought for the convention, except that no one was really gathering here.

2. The format was wildly different. Instead of over-long speeches and interruptions of applause extending them even further, this was a fast moving Hollywood-style entertainment that zoomed us from one state to another, from speaker to speaker, from theme to them, all smoothly moderated by actress Eva Longoria Baston, best known for “Desperate Housewives.” She was terrific, friendly and ingratiating in front of the camera, and the fact that she is Latinx added to the diversity the entire evening emphasized, but she was a tad lacking in gravitas when offering occasional political pronouncements.

3. The zooming style worked well: Other than a few pauses of a couple seconds, we were quickly transported all over the country, to watch Biden’s grandchildren reciting the Pledge of Allegiance, cute children of all races and ethnicities singing the national anthem, speeches by the brother of George Floyd, Washington D.C. Mayor Muriel Bowser standing before the Black Lives Matter plaza her administration created, Biden having a dialogue with several notable Blacks in different cities (including the mother of Eric Garner who was killed at the hands of police) to address the issue of police violence against black people, and a round of statements by voters who supported Trump in 2016 and now urged people to oppose him. It was all fast moving and varied and may point to the future as a way for conventions to cover more ground in a more entertaining fashion.

4. Joe Biden Looked Really Old: In most of the footage where Biden appeared, he looked strong, steady and compelling, but some of the shots chosen to emphasize his humanity, where he is having his classic Joe talks and Joe hugs to comfort people, he looked just like what he is, the oldest presidential candidate in history. A virtual convention, where the images of him can be more controlled, might be just what his campaign needs.

5. Where were Pete Buttigieg and Elizabeth Warren? One of the more effective segments of the night was a roundelay of all the main candidates who ran for the Democratic nomination talking about how decent Joe was, how encouraging he was to competitors in the midst of battle. Cory Booker recalled Biden complimenting the New Jersey Senator’s ideas right after they had tussled on stage, Andrew Yang recalled Biden calling to congratulate him after he withdrew from the race. The anecdotes were believable and the whole segment was fun. But where were Buttigieg and Warren, two of his toughest opponents? Perhaps saved for later, but it seemed like a mistake.

6. The issues were life and death. Has there ever been a time or a convention where the issues at stake weighed so heavily? More than anything the two hour presentation hammered home two points: the pandemic that is killing people and was mishandled by the president, and also the tampering with and funding cuts for the U.S. Post Office, which threatens not just our votes, but our lives, given that many people depend on the mail to get their medications and other vital deliveries.

7. The evening’s most devastating moment. That had to be the short segment with Kristin Urquiza of Arizona, just an ordinary American who recalled how her father was killed by coronavirus after believing the assurances from Trump that the virus wasn’t a problem. “There are two America’s” she said, “the America Donald Trump lives in and the America my father died in.”

8. Bruce Springsteen for president! I like Springsteen as well as the next baby boomer, but how many times did we get the snatches of his mournful song “My City of Ruins”   providing a musical connection between segments or “The Rising” playing in its entirety with underlaying images of the country? How about a little Wilco or Stevie Wonder, they’re American, too.

9. The evening’s most poignant moment. The sequence of people who died from COVID-19 was quite moving, all the more so since the late John Prine was included, with snatches of his music. There’s a reason Dylan loved Prine.

11. Bernie was Bernie. Has there ever been a candidate more comfortable in his or her own skin than Bernie Sanders?  For me his speech was the best of the night because it was so rock-solid: strong on the issues, gracious in praising Biden, strategic in telling his supporters they won’t be disappointed by Biden’s policies and with a memorable quip: “Nero fiddles while Rome burns. Trump golfs.” New York Gov. Andrew Cuomo was punchy and the right guy to speechify about the pandemic’s impact on his state and how it might have been handled by Trump, Michigan Gov. Gretchen Whitmer was smart and telegenic in her brief speech, but Bernie’s speech, per usual, was packed with substance and passion and energy.

12, Michelle was just okay: Yes, Michelle Obama is humane and articulate and the camera loves her, and there were strong moments in her speech. But there’s something off-putting about a former First Lady telling us the current president lacks the stature and humanity of the previous president and vice-president. Given that the president being lauded (more implicitly than explicitly) was her husband, that makes it hard for her not to sound self-serving. And compared to the otherwise fast-moving show, the speech seemed too long. On a night when so many things went right, this was a miscalculation.

3 thoughts on “Murphy’s Law: 12 Takeaways on DNC Day One”