Vacant for a decade, former MPS school would become apartments. 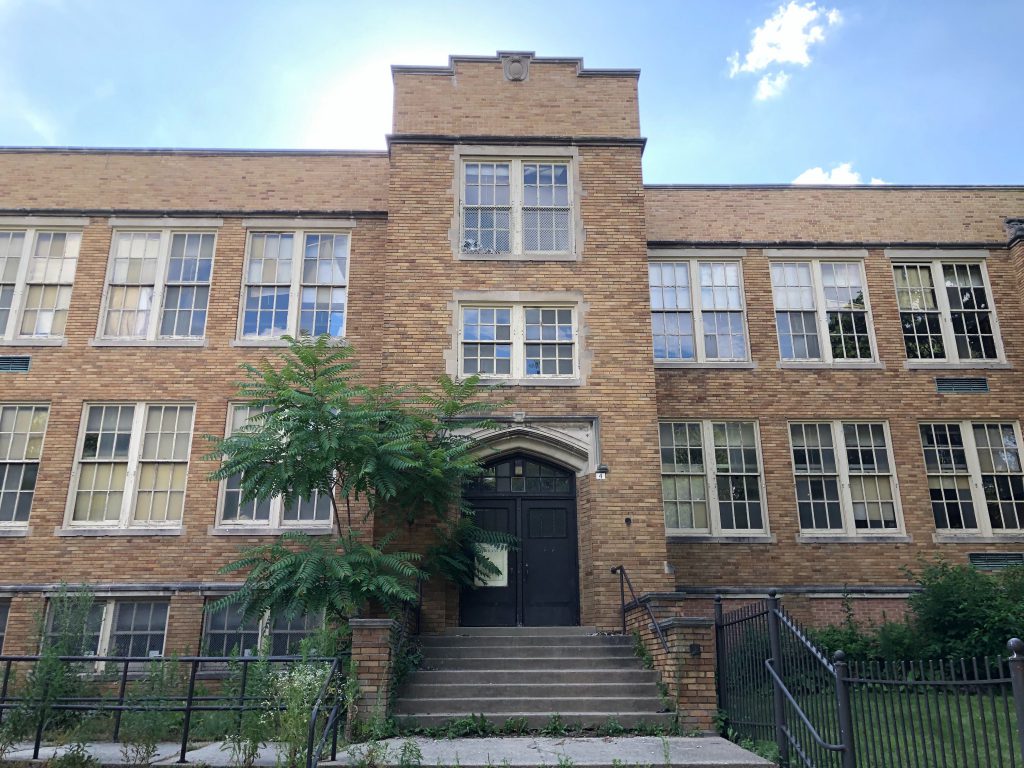 A rezoning request is pending before the city for the former Edison Middle School, 5372 N. 37th St., to allow apartments on the 3.5-acre property. A file would also need to be created to sell the property.

The property was appraised for $1.55 million in 2017, if it was maintained as a school, but schools redeveloped into affordable housing are often sold at a discount by the city. Gorman, as first reported by Tom Daykin, is advancing a $20 million affordable housing proposal for the property. The firm would also need to apply for low-income housing tax credits, with the next annual award scheduled to be made in spring 2021.

The school was built in 1928 and expanded in 1956 according to city records. It contains 44 classrooms and 144,062 square feet of interior space. A city property listing says the school, located in the Old North Milwaukee neighborhood, has been closed since 2008.

The property could be eligible for historic preservation tax credits, a federal and state financing tool increasingly used to plug financing gaps in redevelopment proposals. The Department of City Development has also increasingly relied on developer-financed tax incremental financing districts, effectively a property tax rebate, to finance the complicated deals.

Gorman is involved in a number of such deals, including the redevelopment of the former William McKinley School at 2001 W. Vliet St. The firm secured the necessary low-income housing tax credits in April. Gorman also redeveloped the former Jackie Robinson Middle School and 5th Street School.

The building has had multiple names over its life, including originally being known as North Milwaukee High School for the suburb in which it was then located. It was then known as Custer High School, before a new building was built in 1955 on N. Sherman Blvd. The 37th Street school then became a middle school. An elementary school at the south end of the property was demolished in the 1980s.

It was designed by the firm of Van Ryn & DeGelleke.

The building was slated to house Milwaukee Excellence charter school in 2015, but the school ended up opening at 4950 N. 24th St., the former McNair Elementary School.

The proposed redevelopment is two blocks from the Villard Commons building that is currently under construction. 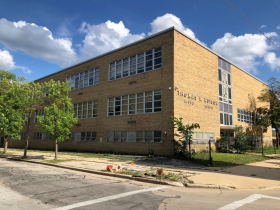 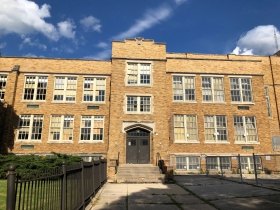 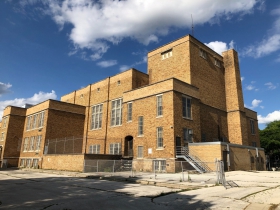 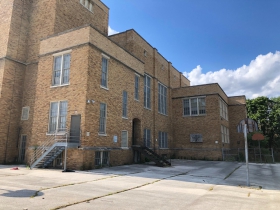 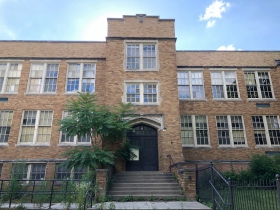 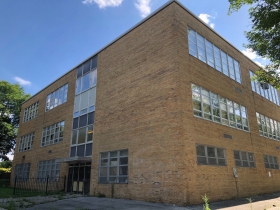 Two new apartment buildings are open, and full, on Milwaukee’s South Side.

First proposed in 2016, the buildings were developed as part of a partnership between Cardinal Capital Management and Journey House.

Inside the Dubbel Dutch Hotel

What’s it like opening a hotel in the middle of a global pandemic?

The owners of the Dubbel Dutch boutique hotel in downtown Milwaukee are about to find out. The hotel welcomed its first guests on Saturday.

The 17-room hotel was a challenging proposal when it was first advanced in 2017 for a historic double mansion (two attached residences) at 817-819 N. Marshall St.

Partners David Griggs and Gregory Davis plan to buy a vacant, city-owned building at 400 E. Locust St in the Harambee neighborhood, and redevelop it into a home for a startup business with housing above.

“We are excited to be growing our business, moving from single-family homes to rental properties,” said Griggs. The partners run One 5 Olive, a reference to the North Side interaction near where they grew up.

The Common Council’s Zoning, Neighborhoods & Development Committee unanimously endorsed selling the building to the company for $15,000.

Construction Costs Could Decline By End of 2020

One of the area’s largest general contractors is projecting that construction costs could decline through 2020, following a decade of growth. The cost of construction is one of the largest inhibitors of real estate development in Milwaukee.

Mortenson Construction reported that construction costs have been relatively flat in the Milwaukee market as well as nationally through the first half of 2020.

Construction employment, despite the pandemic, actually increased in Milwaukee through the first half of 2020. The firm attributes this to the number of projects currently underway. “Looking ahead, we expect construction employment will hold steady or decrease over the remainder of the year,” says the company in its quarterly analysis.

The founders of the Walnut Way Conservation Corp. are continuing their efforts to improve the Lindsay Heights neighborhood in which they’ve long resided.

With construction wrapping up on Adams Garden Park, an office building and attached grounds that will be home for a number of environmentally-focused tenants, Sharon and Larry Adams are moving to the next phase.

The husband-and-wife team plan to open a garden center at 1726 W. Lloyd St., near the intersection of N. 18th St. and W. Fond du Lac Ave.

“We’re hoping to turn this parcel into an urban garden center and provide commercial and retail plant supplies,” said Larry in presenting the project to the Zoning, Neighborhoods & Development Committee on Tuesday

Master plumber Richard Hale will buy a city-owned, vacant building as 1246 W. Atkinson Ave. for use as an office for his plumbing company and a real estate investment firm.

“As we continue to grow we are in need of a place to meet with clients and prospective tenants,” he told members of the Zoning, Neighborhoods & Development Committee on Tuesday. The property, located in the Arlington Heights neighborhood, is near W. Capitol Dr. and Interstate 43.

Hale, who operates R. Hale Plumbing, will perform much of the redevelopment work on the 2,398-square-foot, two-story building himself.

The second floor would be maintained as housing. “We are going to renovate the second-floor apartment and rent that out at market rate,” said Hale.

The city acquired the property through property tax foreclosure in September 2014. A city report says Hale has a $30,000 renovation budget.

“This is a really unique project for us to be involved in, and is really unlike anything we have done,” said Department of City Development economic development specialist Dan Casanova on Tuesday morning to members of the Zoning, Neighborhoods & Development Committee.

He was referring to the city contributing $1 million to the redevelopment of the Milwaukee Journal Sentinel complex. On its face, the project seems anything but unique. A number of old, multi-story buildings have been converted to housing in Milwaukee.

But few of the redeveloped buildings in Downtown have become affordable housing, and none of them have been explicitly for students at a technical college. A 1962 addition to the complex, which appears from the street to be three attached buildings, would be redeveloped as 77 apartments with 189 total bedrooms. Milwaukee Area Technical College, whose downtown campus is two blocks west, would lease the entire building and set aside 27 units as affordable housing for its students making less than 60 percent of the area median income.

A city-owned park on W. Mitchell St. will see new life under a plan being advanced by the MKE Plays initiative.

Witkowiak Park, located on a one-acre site at the northeast corner of the intersection of S. 4th St. and W. Mitchell St., is being rehabilitated.

The redeveloped park will replace what is largely a grass lot with a synthetic turf multi-use field for soccer and other sports, permeable pavement running track, two half-court basketball courts, adult fitness equipment and a “nature-based” playground.

It’s the latest mural from artist Fred Kaems, who has made a name for himself in recent years as he’s painted everything from a Giannis Antetokounmpo tribute mural in Tippecanoe to a message of positivity and togetherness during the pandemic on his own Washington Heights garage door.

Kaems started work this week on an approximately 1,700-square-foot mural that covers the east facade of the building at 5700 W. Vliet St., home of the The Vintage Glass Garden home goods store and Rainbow Booksellers.

With little explicit explanation as to why, the Milwaukee Common Council could effectively fire Assessment Commissioner Steve Miner.

The position is one of many that Mayor Tom Barrett has to appoint following his re-election. Miner has held the post since 2015.

Residential property assessments, which under state guidance are supposed to reflect pre-pandemic values on January 1st, are up an average 11.95 percent across the city. That isn’t sitting well with many city residents, including a number of Common Council members.

Miner couldn’t produce an exact count of the number of appeals filed as a result, even though they were due in May.

“At this point we don’t have a formal count on the number of appeals because we are still entering the data,” said Miner. He estimated the number to be at least 3,000, a total which would be almost double the 1,571 filed in 2019.