Artist Fred Kaems paints a message of solidarity on his own garage. 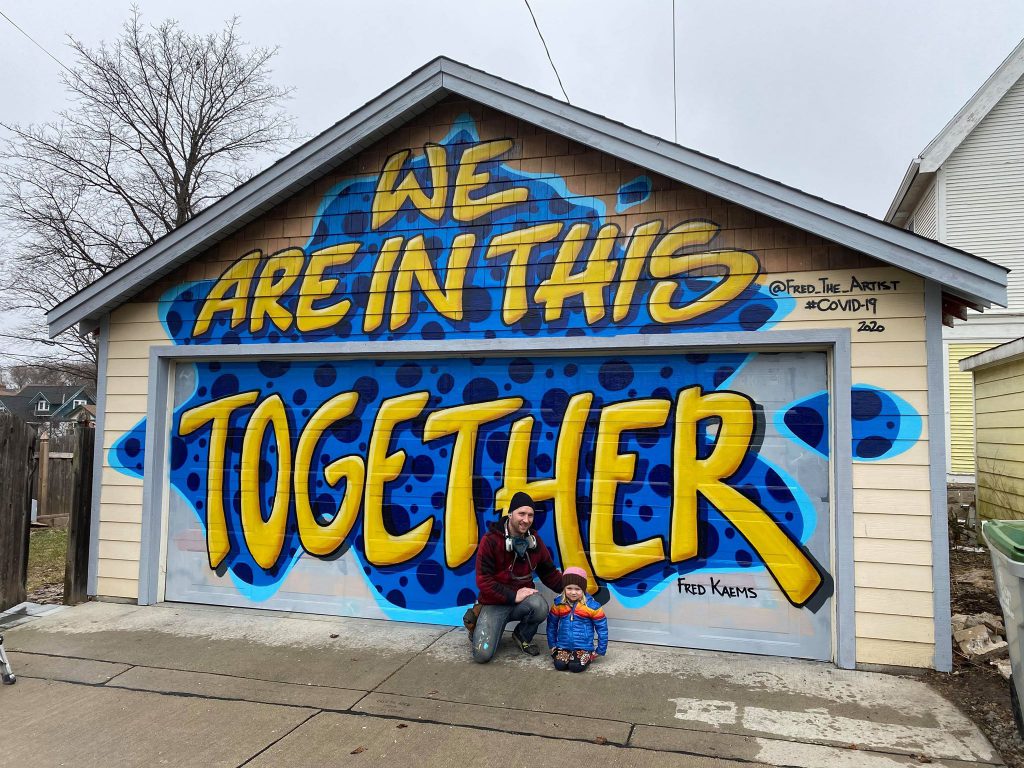 “We Are In This Together,” by Fred Kaems. Photo courtesy of Kari Kaems.

There’s a message on a garage in the city’s Washington Heights neighborhood that is perfect for this new world we’re living in.

“We are in this together,” it reads.

Fred Kaems, a local artist and muralist, spray-painted the message on his garage, somewhat on a lark. He’d been meaning to paint the garage since last fall. But the weather kept him away from it. Then the pandemic hit and Kaems was laid off from his job as a part-time server at Carnevor steakhouse.

Kaems is an active muralist in Milwaukee, and a number of mural projects he had lined up have been put on hold. He was “in full production mode” for an upcoming art show. Then in a matter of days, it all fell apart.

Like so many in Milwaukee, and around the country, Kaems’ life is on hold. Like everyone, he’s feeling a lot of uncertainty about the future, as the world reels from the damage caused by the COVID-19 pandemic.

But one thing is certain, and that is, “We are in this together.”

“Hey man this sucks,” Kaems said. “But it sucks for everybody.”

Kaems has been artistic most of his life, he told Urban Milwaukee. In recent years he’s seen success, notably with the murals he has spray-painted around the city. His Instagram account is filled with pieces Milwaukeeans will recognize. One of his murals, a painting of Giannis Antetokounmpo in Tippecanoe, was mentioned in the latest issue of Sports Illustrated.

These murals, like the one on his garage, are done with spray paint. Kaems has used the medium for decades. Kaems produced his first murals as a teenager. Though, they were not commissioned. Many of them were produced on the sides of rusty, old train cars.

For this reason, the mural on his garage is deeply personal for Kaems. “I love painting letters,” he said. “It reminds me of my youth.”

And however personal the project was for Kaems, the public reaction has been much the same. Kaems touched on something with his message. It was perfect timing. Had he painted whatever he planned to last fall, he said the response would likely not have been close to what he has gotten from this.

“I think that I… hit the nail on the head,” Kaems said.

In this incredibly uncommon time, Kaems said, it’s becoming more apparent that we all have so much in common. “This is important today, but I hope this message is still important in 10 days or 10 years,” Kaems said. “We’re seeing more so than ever how every little person is connected.”