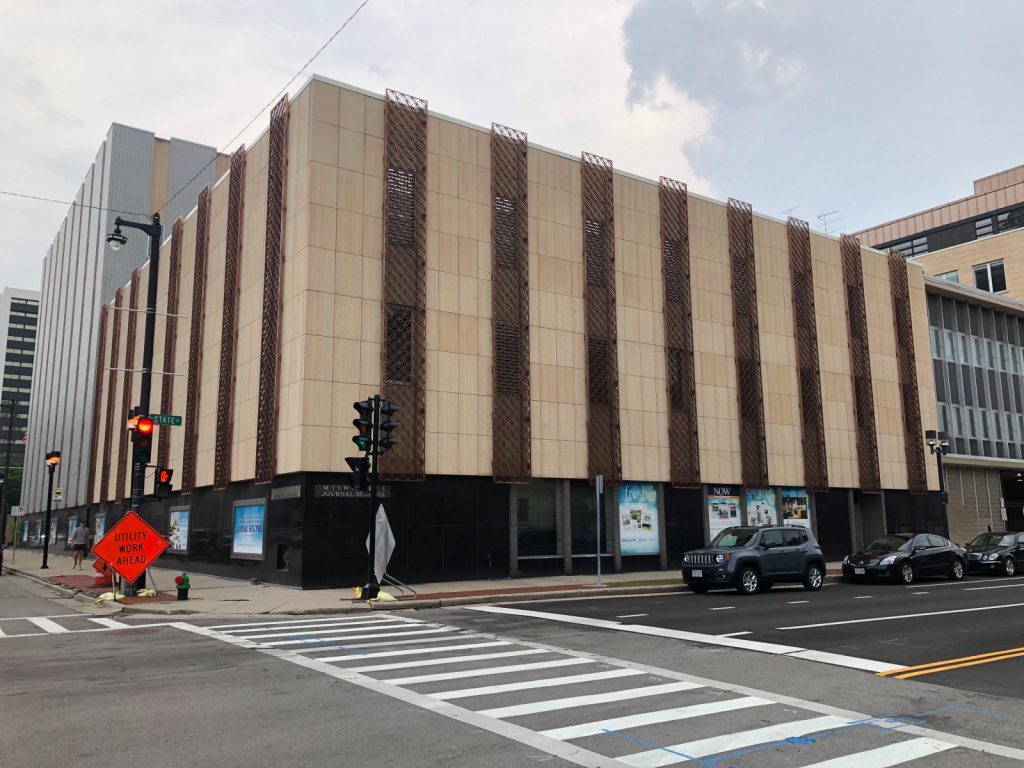 1962 addition to the Journal Sentinel complex. Photo by Jeramey Jannene.

“This is a really unique project for us to be involved in, and is really unlike anything we have done,” said Department of City Development economic development specialist Dan Casanova on Tuesday morning to members of the Zoning, Neighborhoods & Development Committee.

He was referring to the city contributing $1 million to the redevelopment of the Milwaukee Journal Sentinel complex. On its face, the project seems anything but unique. A number of old, multi-story buildings have been converted to housing in Milwaukee.

But few of the redeveloped buildings in Downtown have become affordable housing, and none of them have been explicitly for students at a technical college. A 1962 addition to the complex, which appears from the street to be three attached buildings, would be redeveloped as 77 apartments with 189 total bedrooms. Milwaukee Area Technical College, whose downtown campus is two blocks west, would lease the entire building and set aside 27 units as affordable housing for its students making less than 60 percent of the area median income.

“They have a unique student demographic with a wide range of needs and housing is one of them,” said Danielle Bergner, chief operating officer at J. Jeffers & Co. The student body is older than traditional college students, more racially diverse than many other area colleges and a number of students have children.

The city would dedicate $1 million in incremental property tax revenue generated by the redevelopment to support the project. Known as a developer-financed tax incremental financing district, the structure is effectively a property tax rebate that places the risk on the developer.

A second purpose is one partially of Bauman’s creation. He, along with Ald. Michael Murphy, moved to have the building historically designated in early 2019. “When we designate buildings we frequently place an additional burden on property owners; it’s only fitting that the public should absorb an additional cost.” A portion of the city’s funds would go to restoring the frieze (stone artwork wrapping the building) that depicted the history of communication and was removed in 2011.

Council members Ashanti Hamilton and Milele A. Coggs both said they were happy to see affordable housing being created Downtown.

The city’s financial modeling assumes the $54 million project will only be assessed at $24.7 million when completed. Assessments for rental properties are based on income and affordable housing projects regularly are assessed for less than their construction cost, with public financing closing the gap. Financing for the project also relies on historic preservation tax credits and private financing.

The general contractor on the project is CG Schmidt. Design is being led by Eppstein Uhen Architects. Bergner said the firm is ready to start in the coming weeks on construction of the student housing. The market-rate housing construction would commence in the coming months after additional work is done, including the remaining Milwaukee Journal Sentinel employees relocating to the 330 East office complex.

A third building, the vacant four-story structure at 918 N. Vel R. Phillips Ave. formerly used by the Milwaukee Sentinel, is not included in the current plans. A large parking lot at the southeast corner of the block is also not part of the plan, nor is the building occupied by Major Goolsby’s restaurant at the southwest corner of the block. J. Jeffers & Co. owns all those properties, having acquired them in October 2019.

The TIF district being amended originally was created in 2015 to provide $20 million to the Milwaukee Bucks, including $12 million for the plaza outside Fiserv Forum and $8 million towards a new parking structure. Incremental property taxes from the Deer District and team training facility pay back the project debt.

The board of the Redevelopment Authority of the City of Milwaukee approved the financing plan last week. It next goes before the full Common Council on July 28th.