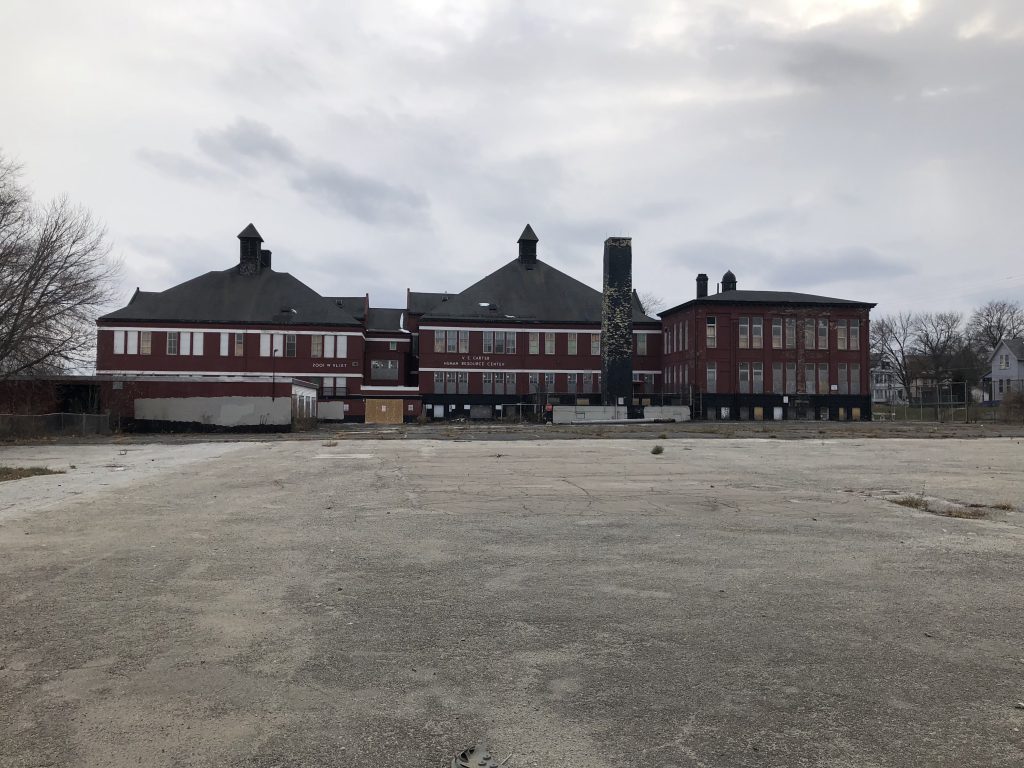 The planned McKinley School redevelopment was one of the winning projects. Photo by Jeramey Jannene.

The state announced awards of federal and state credits totaling $31.9 million to support 34 projects in 23 communities targeted at creating 2,194 units of housing.

“The true impact of these projects will be much greater,” said Governor Tony Evers of the positive impact of the projects. He said that combined with the necessary private investment required to leverage the credits, the total investment would be $217 million. “Investments in affordable housing pay dividends for all families in our communities.”

There were almost twice as many requests for credits as the Wisconsin Housing and Economic Development Authority (WHEDA) was allocated to award.

“It shouldn’t take a pandemic to recognize the importance of housing in our life and our economy,” said WHEDA CEO Joaquín Altoro. He noted that nearly all 100 of the people on the virtual briefing were participating from their own homes.

Projects in Milwaukee receiving funding include the second phase of an apartment complex just north of Fiserv Forum, a new building planned to replace an empty, riverfront building at 1887 N. Water St. on the Lower East Side, redevelopment of the vacant McKinley School, scattered-site projects in the Garden Homes and Washington Park neighborhoods, conversion of the St. Joseph Center on the city’s South Side into senior housing and the fourth phase of the redevelopment of Westlawn Gardens.

Developers leverage the credits, often selling them to institutional investors, to create equity to support new, affordable housing for individuals making no more than 60 percent of the area’s median income. The awards come from a pool of credits allocated to the state by the federal government and an associated state pool. Developers, many of whom will submit a project multiple times, compete for the credits as part of an annual, competitive process.

“The 34 projects receiving tax credits are not receiving handouts, these awards are incentives,” said WHEDA board chair Ivan Gamboa. “The cost of development today is too high for affordable rent to generate a positive cash flow.”

Winning developers must set aside units at below-market rates for individuals making less than 80 percent of the area’s median income. Developers vie for the credits by adjusting project costs and targeting units at different income thresholds.

“At WHEDA we’re trying to figure out above and beyond tax credits, how do we bring additional resources to build these buildings,” said Altoro.

The state now has two programs. The first is the longstanding nine percent federal credit, of which 23 projects were awarded credits from this year. The second is a second-year program that combines a four percent federal credit with a four percent state credit. Thirteen projects totaling 1,009 units received credits from the combined credit program. The federal credits in each program are awarded annually for 10 years, while the state credits are issued for a six-year period.

Projects that did not receive credits in the latest award round include a number of high-profile projects such as the Journal Square Lofts redevelopment, the Martin Luther King Library replacement, the Fletcher School redevelopment on the far northwest side and the redevelopment of the Wildenberg Hotel on S. 27th St.

Altoro encouraged developers that didn’t receive credits to apply again. In the case of at least one Milwaukee winner, Gorman’s redevelopment plan for the McKinley School, it took multiple applications to secure the credits.

The amount of credits allocated to each state is determined by the census, which led Altoro to make a plea for residents to make sure to fill out their census if they want to see more affordable housing.

On Hold or Ineligible Projects