Each non-response could cost Milwaukee $1,600 per year for next decade. 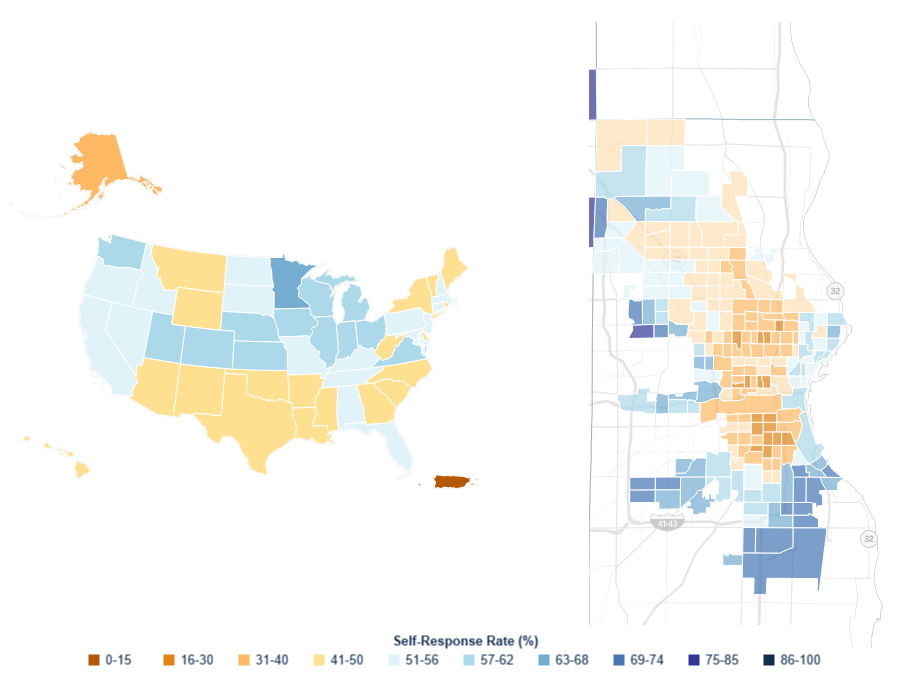 Census response rate. Maps from the US Census Bureau.

In less than 10 minutes you can bring over $10,000 to your community by filling out a form on your smartphone.

The 2020 United States Census is underway and it will determine how more than $675 billion in federal funds is distributed annually for the next 10 years. The census is conducted once every decade and serves as an official population count that is used to proportionally distribute federal and state funds.

The good news is that Wisconsin residents are responding. As of Wednesday, 60.5 percent of Wisconsin households had responded, above the national average of 51.6 percent. Wisconsin had a 73.5 percent response rate in 2010.

But Milwaukee, at 50.3 percent, is behind both the state and federal average and would lose millions of dollars in funding if that stands.

“You can be assured your data is protected by law and that individual data cannot be shared with other governmental agencies,” said Paul Vang in a virtual press conference. He encouraged all Milwaukee residents, particularly those in the southeast Asian communities, to fill out the census form to make sure their community is represented.

Matt Dannenberg, census director of Wisconsin Voices, said responding to the census is a safe activity individuals can do without leaving home.

“For most residents, it’s going to take 10 minutes or less,” said Mayor Tom Barrett. He said the city has long responded at an above-average rate compared to other large cities, but a study found the state has a whole has been shortchanged by a poor response rate in 2010.

A 2018 analysis of 2010 Census results by George Washington University professor Andrew Reamer found Wisconsin was the sixth-biggest loser in terms of undercounting. The state lost $1,338 per person from federal medical programs in the 2015 fiscal year as a result of undercounting. The city’s Complete Count Committee estimates the city loses $1,600 annually for each non-respondent.

Common Council President Cavalier Johnson said he was encouraged by an online response being offered for the first time. “It took less than 10 minutes to fill it out for the five people in my house,” said Johnson. “It’s quick, it’s easy, it’s important for Milwaukee.”

Responses are due by October 31st, having been delayed as a result of the pandemic. But those continuing to delay in responding will receive a visit from a federal census staffer after August 11th. “Many of our operations are being retooled and planned in light of the COVID-19 concerns we have,” said Marilyn Sanders, regional director of the Census Bureau’s Chicago office.

The process formally started on March 12th. Househoulds should have already received at least one letter in the mail detailing how to respond, but can also go straight to the census website to submit a response. “It’s your constitutional right to be counted,” said Complete Count Committee chair Sharon Robinson.