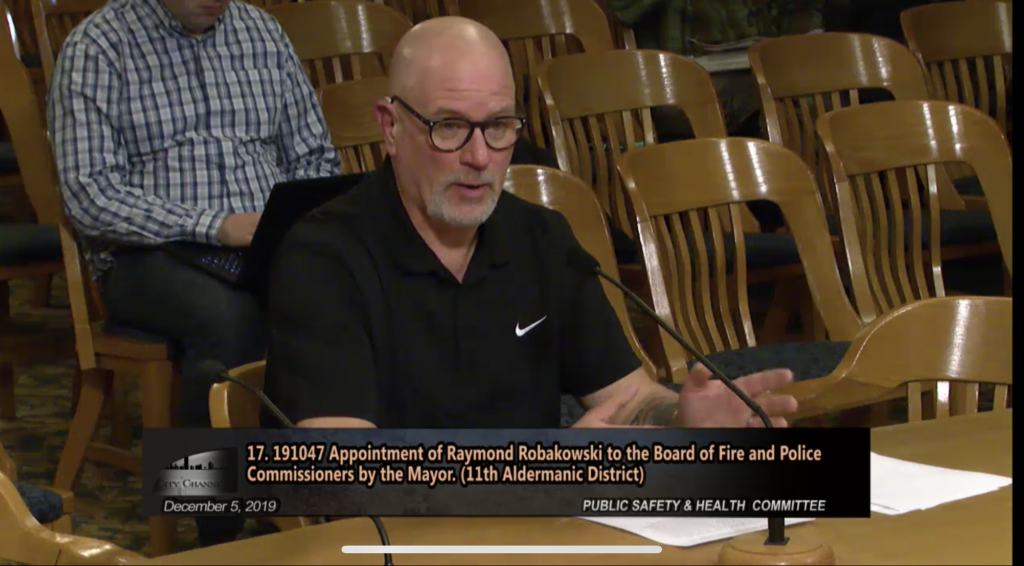 Raymond Robakowski speaks before the Public Safety and Health Committee. Image from the City of Milwaukee.

Former Milwaukee Police Department (MPD) officer Raymond Robakowski will now oversee the department in which he once served.

Robakowski, known as “Officer Ray,” was approved on a 13-2 vote by the Common Council Tuesday morning to serve on the Fire and Police Commission (FPC). The commission is an independent body with direct oversight over the police and fire departments.

The long-time city resident worked for the Milwaukee Police Department from 1995 through 2014. For the first 11 years he served as a patrol officer, later working as a community liaison officer.

Council members Robert Bauman and Nik Kovac asked to be recorded in opposition to the appointment, but neither offered a reason as to why, nor did any proponent speak in favor. Without a third objection, the council did not take separate action on the appointment, instead approving Mayor Tom Barrett‘s appointment as part of the broader Public Safety & Health Committee package.

The vote came as two opponents held up signs reading “No Way Ray.” Activist and FPC Watchdog Paul Mozina, who was one of the sign holders, has raised concerns with a conflict of interest Robakowski could find himself with.

Both of Robakowski’s sons work in law enforcement, with one of his children working for the Milwaukee Police Department. The FPC handles disciplinary and termination decisions for both the fire and police departments.

“If anything, I will bend over backward to ensure my approach is fair and balanced,” said the nominee during a December 5th hearing regarding his appointment.

Mozina was joined by African American Roundtable organizer Devin Anderson in holding the signs in the council gallery. A number of other individuals, including representatives of Black Leaders Organizing Communities (BLOC) and the American Civil Liberties Union (ACLU) were present.

In an interview after the meeting, Kovac said it wasn’t the family connection that concerned him. “I’ve actually known Ray a long time,” said Kovac. “Officer Robakowski was an excellent community liaison officer.”

Kovac said in his discussions with the nominee he had concerns regarding Robakowski’s readiness for the post. “We really need to make sure the Fire and Police Commission is independent and is ready to hold these departments accountable,” said Kovac. The alderman said this went beyond city settlements for police misconduct, and included such issues as oversight of the overtime budget and cost-effective personnel strategies including using civilian positions.

“I’m hopeful he gets there, we had a frank conversation about that. I think his intention is there and I wish him well,” said Kovac. “I think he might end up doing a great job, he just didn’t convince me he was ready on day one. I hope to be pleasantly surprised.”

The alderman told Urban Milwaukee it “wasn’t even a close call for me.” He raised concerns with Robakowski’s stance on residency, the appearance of a conflict and the racial makeup of the police force. “He told me he had no problem with police and fire officers moving outside the city,” said Bauman. The alderman said this flies in the face of what the council and Barrett have been pushing.

He said the appointee’s son serving in the department also created a potential issue. “Out of 600,000 residents we can’t find people that don’t have the appearance of a conflict,” said Bauman.

Bauman said Robakowski told him “we all take the same test” in response to a question about the trend towards a whiter police force while the city trends toward a more majority-minority makeup. The alderman said his belief in building strong police-community relations involves having officers that share the same racial makeup of those they are policing.

Big decisions soon to face Robakowski include the reappointment of MPD chief Alfonso Morales and Milwaukee Fire Department Chief Mark Rohlfing as well as defining a procedure for cooperating with U.S. Immigration and Customs Enforcement requests. Officer Ray will be the seventh member of the commission, casting a potentially tie-breaking vote.

On the chiefs, it might be awhile before Robakowski gets to cast a vote. Board chair Steven DeVougas has delayed the reappointment of Morales until at least January. Morales, whose contract expires January 7th, will continue to serve in a holdover position until the time his contract is renewed or he leaves the department.

“He’s one of the few people… that brought respect across the spectrum,” said council president Ashanti Hamilton of Robakowski during the committee’s confirmation hearing. Hamilton had suggested Barrett appoint Robakowski. “It’s time for us to try to start pushing the Fire and Police Commission in the direction where we can start building that trust.”

During his committee confirmation hearing, the retired officer drew praise as “genuine” from Alderman Mark Borkowski, in whose district he resides. Ald. Scott Spiker called him a “straight shooter.” Ald. Robert Donovan said he was pleased with Robakowski’s nomination.

Robakowski’s confirmation was much smoother than the last three appointments to the board. The council rejected the appointments of Denise Bartlett and William Gielow. In 2018 the council approved retired firefighter Everett Cocroft, an African American, after a contentious hearing where Cocroft defended a 2016 email he sent to the council and other city officials that said police officers were only guarding their “wallets, pension and benefits.”

After Robakowski’s appointment, two vacancies remain on the nine-member board. Ann Wilson, whose appointment expired in 2017, also needs to be replaced.