That would be the billionaire investor running for president who calls Trump “a fake businessman.” 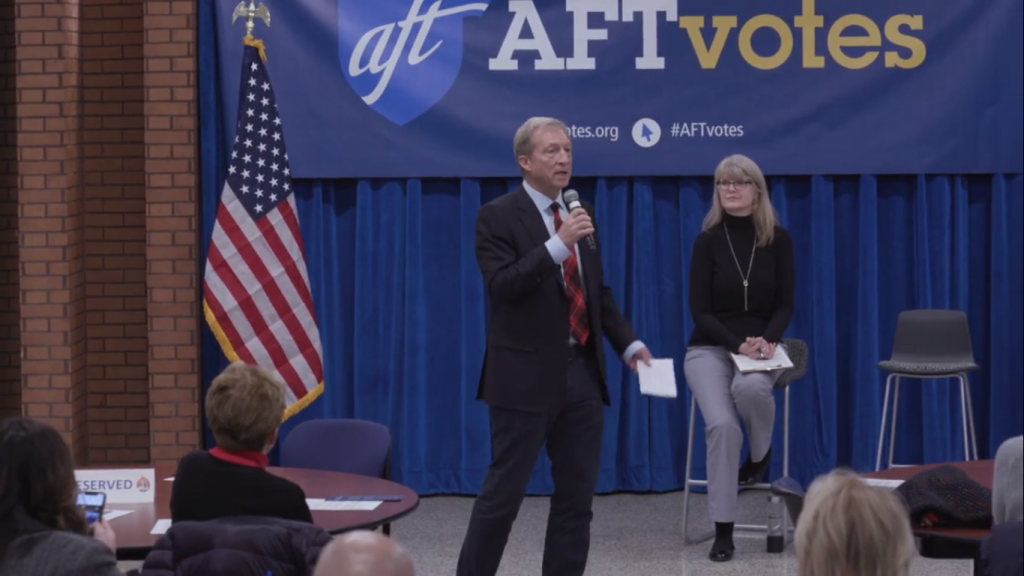 A former billionaire businessman running in the upcoming crowded Democratic U.S. presidential race shared his views on such issues as climate change, the economy and education this week as he made a stop at Milwaukee Area Technical College.

Tom Steyer, founder and a former senior managing partner of Farallon Capitol, spoke before a crowd of dozens of MATC educators in downtown Milwaukee on Wednesday as a part of the American Federation of Teachers’ town hall candidate forum.

Until recently, Steyer told the crowd he wasn’t actually aspiring to run for the commander-in-chief post.

“I’m running for a simple reason — I believe the government is broken and that it’s been purchased by corporations,” said Steyer, who lives in California. “It’s working perfectly for them, but it’s not working at all for the American people.”

Throughout his nearly hour-long address, Steyer also lobbed a number of criticisms against President Donald Trump. He touted his call for Trump’s impeachment in advance of the current inquiry that is underway.

Touting his business acumen, Steyer also told the crowd he would relish the opportunity to debate Trump on the intricate details of economic growth.

“He is incoherent and ignorant when it comes to jobs and the economy,” Steyer said. “The idea of cutting education for prosperity is the stupidest thing I can imagine.”

While Steyer grew to prosperity in the private sector, he said he viewed doubling down on the economy as a fundamental backbone to growing the nation’s economy.

Other issues Steyer touched on during his Milwaukee visit were proposed term limits in U.S. Congress and Senate. Steyer said it would be prudent to hold a nationwide referendum on term limits

He also shared his concern that too many elected officials have been adopting a corporate-influenced mindset. “If we don’t break the corporate stronghold … we aren’t going to get a darn thing” or make any progress, he said.

Other hot-button issues, including gun control and climate change, also were touched on briefly in Steyer’s address to the MATC union members. In both instances, Steyer said he believed gun manufacturers and oil companies, respectively, have been behind the stalled efforts to enact what he viewed as common-sense reforms.

Steyer’s speech here came the day before news broke of his aide offering payments to elected officials in Iowa to endorse Steyer’s candidacy.

Steyer’s Milwaukee visit was the 10th in a series of the AFT’s nationwide candidate town halls. The organization has hosted similar events at other venues across the U.S.

Randi Weingarten, president of the AFT, also was in Milwaukee for the town hall. She shared concerns about Wisconsin’s commitment to education-related priorities, while noting the “surgical precision” of former Gov. Scott Walker in changing the state’s collective bargaining laws.

Lisa Conley, president of AFT Local 212, also spoke at the event. Conley, a life sciences teacher at MATC, called on her colleagues to make sure their voice was heard in next year’s race

“We’re looking forward to some interesting times,” Conley said, pointing to next year’s DNC. “As union members, we, too, must care. We must fight, and we must show up, and we must vote.”

One thought on “Tom Steyer Comes to Town”