Love the idea? Hate it? Either way we have all the details. 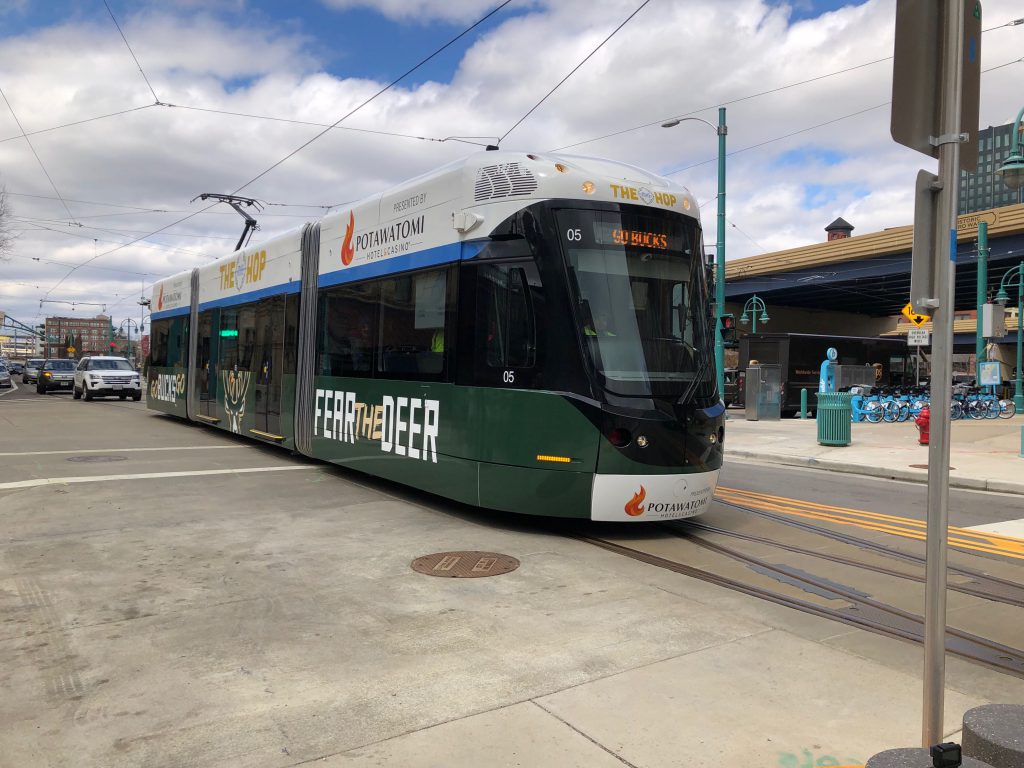 The mayor’s proposal would fund construction of an extension to the convention center and engineering and planning work on extensions to N. Martin Luther King Jr. Dr. and W. North Ave. via Fiserv Forum and S. 1st St. and W. Pittsburgh Ave. via N. Milwaukee St.

Barrett, flanked by community leaders and four council members, held his press conference at Gee’s Clippers barbershop at 2200 N. Martin Luther King Jr. Dr., drawing the strong support of owner Gee Smith and area alderwoman Milele A. Coggs. “I am definitely in 100 percent support of the streetcar coming down MLK Drive,” said Smith. “It allows us to get more patrons and clients from far and near without taking up parking spaces.”

King Drive Business Improvement Director Deshea Agee also endorsed the project. “The streetcar is an economic development tool and we need it.” 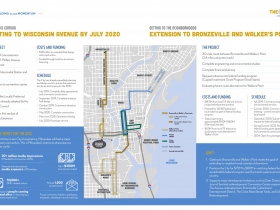 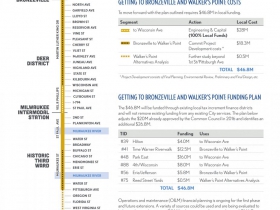 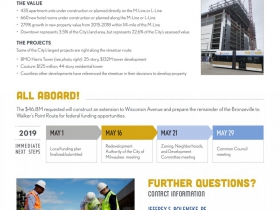 But before we all run to share our opinions on social media, let’s look at 11 important facts and figures about the proposal.

1. Construction on the convention center extension is planned to be done by summer 2020, in time for the DNC

The extension from the Milwaukee Intermodal Station to the convention center via N. Vel R. Phillips Ave. and N. 5th St. will be complete by July 2020 according to Barrett’s proposal. The project has an estimated cost of $28 million, which includes approximately $5 million for engineering services and $6 million for utility infrastructure.

Will anyone going to the DNC use it? “Here’s the good challenge we have next year as the host of the Democratic National Convention, we actually cannot have [the streetcar] stop in front of the Fiserv Forum,” said Barrett. The vehicle would have to cross the security perimeter.

Instead, visitors will get off the vehicle at W. Wisconsin Ave. near what is likely to be the edge of the security perimeter for the event.

Beyond serving the 50,000 person convention and Wisconsin Center, the extension will connect to a number of Westown anchors including The Avenue development, a number of hotels, and the Hub 640 and The Blue office buildings.

Barrett doesn’t sit atop the Iron Throne of Westeros, the Common Council will need to approve any expansion of The Hop. And with that could come any host of changes to the legislation, including splitting it into multiple files or stripping parts out.

“To say that when we began the dialog the streetcar was controversial is an understatement,” said Coggs. Still, the alderwoman said she hoped her colleagues would approve the extension.

She was joined on stage Thursday afternoon by three of her colleagues, council members Nik Kovac, Cavalier Johnson and Russell W. Stamper, II.

Similar to the 2014 debate that authorized the streetcar, project opponents, which includes council members Tony Zielinski and Robert Donovan, could use a variety of parliamentary procedures to delay the project’s approval even if proponents have the votes to pass it.

The file is expected to be introduced in the next Common Council meeting cycle starting May 8th.

3. The Walker’s Point and Bronzeville extensions would operate as one line, opening as early as 2024 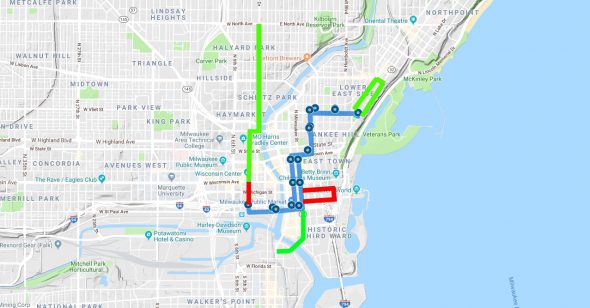 The north and south extensions are being envisioned as one line, with vehicles operating on existing track in the Historic Third Ward and near the Milwaukee Intermodal Station.

There are political as well as practical reasons for this. Most importantly, envisioning a bigger project would allow the city to apply for a federal transit grant instead of a general transportation grant. After winning funding to extend the system to The Couture and lakefront, the city has repeatedly struck out applying for a stimulus-era program now known as BUILD. The annual program, which includes funding for everything from rural highways to port infrastructure, has far more grant applications than it has funds to award.

The city intends to apply for a Small Starts grant, which would fund 50 percent of the project’s cost. The transit-only program is the same program Milwaukee County is using for the East-West Bus Rapid Transit proposal.

“We feel that we are in a very good position to compete,” said Barrett.

4. Construction costs for the Walker’s Point and Bronzeville extensions could reach $160 million combined

Funding for building the two larger extensions is not included in Barrett’s proposal. The engineering work is intended to generate a better cost estimate, but city officials currently believe the project would cost between $150 million to $160 million to build. That figure includes purchasing all of the equipment necessary, including additional vehicles.

Under the federal Small Starts grant program (described above), the federal government would pay for 50 percent of those costs. This would mean the city still needs to find $80 million in tax-incremental financing funds or another local source if it intends to build the whole district. Districts can only spend money on public infrastructure within a half mile of their boundaries.

5. The extensions would connect some of the city’s wealthiest residents with its poorest

“I want this to be one community. What I have found when people are riding the streetcar is they’re more likely to talk to each other,” said Barrett. If the proposed extensions are built, it would definitely connect areas of people that might not often interact.

6. Construction costs wouldn’t directly impact the city’s budget, but they would indirectly

Building the extension to the convention center and studying the two extensions wouldn’t result in a direct political choice between hiring a police officer or building streetcar track, but there would be indirect impacts.

The proposal relies on funding from five pre-existing tax-incremental financing districts. Increased property tax revenue from properties within the district are used to pay off associated debt.

Extending the life of five TIF districts will delay the time until the increased revenue flows into the city’s general fund. If no other variable changed, closing any eligible TIF districts would result in a very, very small amount of property tax relief. The city is a dynamic organism though, with thousands of variables affecting the city’s budget and value of city properties.

The bigger question, and one not addressed yet, will be how the city intends to fund the operation of the extension. In 2019, The Hop’s operations are planned to be funded by a federal grant for operations ($3,457,754), the Potawatomi Hotel and Casino sponsorship ($691,670) and other advertising deals ($250,000).

If you have a child considering a career, send them into engineering. The city projects to spend $18.8 million on engineering costs on the Bronzeville and Walker’s Point extensions.

City officials derived that cost by first calculating the estimated construction cost of the extensions, which includes a number of worst-case scenarios and an overrun budget, and then using that figure ($150 million to $160 million) to estimate the engineering and planning costs based on past experience and national best practices.

Much of the work would ultimately be performed by consulting firms because the city does not have the expertise in house. The high “soft costs” associated with major infrastructure projects has recently become an issue on the California High Speed Rail project and California Governor Gavin Newsom.

8. Didn’t we study this already?

You’re forgiven for thinking this whole thing has been studied already. The city won a $750,000 federal grant to study the land use around potential streetcar extensions in 2016, finishing that work in late 2018. But that study, due to a restriction with the grant, didn’t include planning on the actual streetcar itself.

It did involve plenty of community meetings that Coggs said helped build a consensus on what the community would like to see. “It makes no difference if you lay the tracks if the community doesn’t feel a connection to or benefit from the streetcar,” said the alderwoman.

9. No consensus on Walker’s Point route

The northern extension is pretty clear, via Fiserv Forum to the intersection of N. Martin Luther King Jr. Dr. and W. North Ave. But the southern extension has more questions that answers.

Barrett is proposing a route through the Historic Third Ward on N. Milwaukee St., crossing the Young Street Bridge before bending towards S. 1st St. and W. Pittsburgh Ave. Where the route goes from there becomes as much of a political question as an engineering one.

Alderman Jose G. Perez has advocated for a route to S. 6th St. and W. National Ave. as far back as 2015, but the street grid presents a number of options to get there.

Should the streetcar head south on the wide S. 1st St. or narrow S. 2nd St? Or should it use the recently reconstructed S. 5th St.? The route could follow the former North Shore Line route to Chicago by using S. 6th St. It could also go west on W. National Ave., W. Florida St. or W. Pittsburgh Ave. Simply put, there are options, not answers. Planners will need to balance political concerns, buried utility lines and potential ridership.

“Although we have some good systems that already exist, the streetcar brings us into the modern day,” said Coggs.

“If this city is going to compete in the 21st century, we have to be competitive with cities like Denver, Seattle and Atlanta,” said Barrett.

Both have acknowledged the value of the countywide bus system, but indicated that the streetcar has the potential to attract more riders and associated economic development.

One thing not discussed at Thursday’s press conference is the potential to extend the line to E. Brady St. from its current eastern terminus at E. Ogden Ave.

“That’s still in our plans. All of this is contingent obviously on financing,” said Barrett earlier today. The city has already performed preliminary engineering work on an extension to E. Brady St. and has received an important “finding of no significant impact” from the Federal Transit Administration on the route. But what the extension lacks is money to actually build it. A local and federal funding source need to be identified.