Will request engineering study of extensions to Bronzeville and Walker's Point 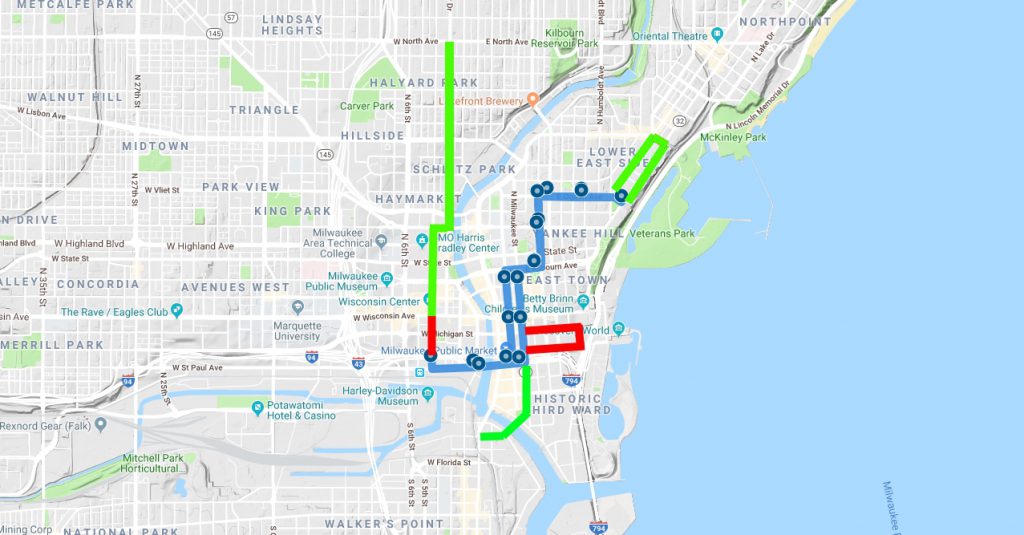 The Hop existing route and proposed extensions. Red, planned for completion in 2020. Green, engineering and study planned, construction unfunded. A Lower East Side extension is unlikely to be included in the May legislation. Image from Urban Milwaukee.

Mayor Tom Barrett is advancing a proposal to extend the streetcar to the convention center on W. Wisconsin Ave. as well as study extensions to Bronzeville and Walker’s Point.

The proposal, planned to be introduced in early May for the next Common Council cycle according to multiple sources, will allow for the construction of an extension from The Hop’s western end at Milwaukee Intermodal Station to the convention center at N. Vel R. Phillips Ave. and W. Wisconsin Ave.

That extension, whose planning was reported by Urban Milwaukee in January, is estimated to cost $20 million to $30 million to engineer and build. It would be built entirely with city funds. Multiple sources described the $30 million figure as a worst-case scenario and suggested the final number will fall as coordination work is conducted with utility companies. The city would fund the work using tax-incremental financing, a model first approved in 2016.

The file would also approve funding to perform engineering and planning work on a northern extension past Fiserv Forum to N. Martin Luther King Jr. Dr. and W. North Ave. A southern extension through the Historic Third Ward via N. Milwaukee St. to W. Pittsburgh Ave. in Walker’s Point would also receive engineering and planning. If federal funding was to be used to build those future extensions, the city would need to submit additional environmental impact studies to the federal government. The two extensions would operate as one route.

Funding for the construction of the Walker’s Point and Bronzeville extensions would not be included in the pending legislation.

Five sources described various facets of the proposal to Urban Milwaukee, advancing a vision advocated by Barrett for over ten years of building the streetcar system incrementally.

“The biggest problem is that it doesn’t go far enough in every direction, but we are solving that problem incrementally,” said Alderman Nik Kovac. “We want to get it further south, further north, further west.” The alderman, giving the parallel East Side streets of E. Ogden Ave., E. Brady St. and E. North Ave. as examples, said that any extension builds momentum to continue to expand the system and grows its value.

City officials and project consultants have engaged in conceptual planning for how to extend the streetcar north on N. Prospect Ave. and N. Farwell to E. Brady St. according to multiple sources. Two sources close to the mayor suggest that section will not be included in any May legislation. A local funding source would need to be identified to allow the study to proceed in that area.

Ald. Tony Zielinski, a 2020 mayoral candidate, remains opposed to streetcar. “Basic city services in our neighborhoods are being cut, and the mayor keeps pushing a streetcar,” said the Bay View alderman in reference to the city’s aging snow plowing equipment and other public works infrastructure.

Zielinski, who characterized the proposal as “fiscally irresponsible,” said it’s being executed in secret. “They know it’s unpopular,” he charged.

Politically, the proposal will rely on the support of the two council members into whose districts it would extend, Alderwoman Milele A. Coggs and Alderman Jose G. Perez. Both have voted for the streetcar in the past and advocated extending it as part of a 2018 transit-oriented development study, but neither council member has publicly commented on the latest proposal.

The federally-funded 2018 study was used to define a vision for what development around a streetcar extension in Walker’s Point and Bronzeville could look like, but did not include funding for planning or engineering work on the streetcar route itself.

The Hop’s second phase, a short extension to the lakefront that would terminate at The Couture, is scheduled to open in 2020. Much of the track work is complete, but the segment through The Couture site at 909 E. Michigan St. has not been built, since it is still not known if and when the proposed tower will be built. That presents issues with the funding that will help pay for this extension, which comes from a federal TIGER grant (a program now known as BUILD under President Donald Trump) and which requires the system to be operational by the end of 2020. Depending on when The Couture is built, it may be too late to meet the federal deadline and still build the streetcar line though the proposed tower.

So is there a deadline date after which the extension will have to be built around the site for The Couture rather than through a finished building as hoped? After multiple requests from Urban Milwaukee, the Department of City Development did not provide a timeline for the last possible date construction could start on that extension without having to modify plans due to The Couture’s delay.

The city intends to again apply for federal funding through the annual program to support an extension to Fiserv Forum. The city was denied multiple times before winning the $14.2 million TIGER grant.

Barrett’s office and Ald. Robert Bauman did not respond to a request for comment by the time of publication.