Is Chris Abele planning to back Hamilton? 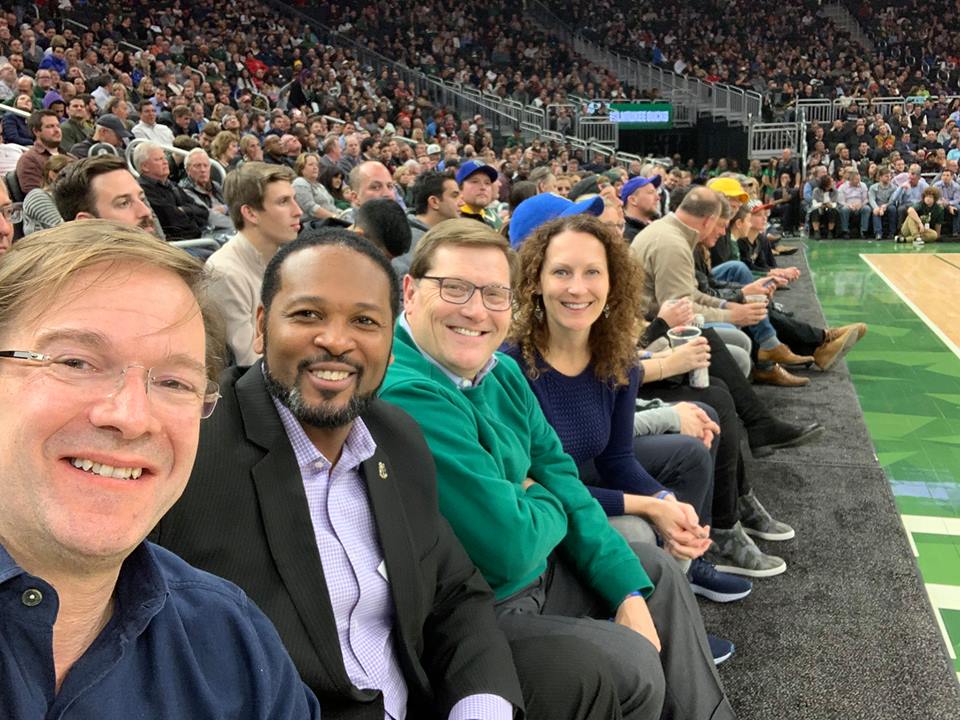 The County Executive made sure the public knew who he was at the game with by posting a photo of himself, Hamilton, political consultant Scott Neitzel and Jennifer Gonda on Facebook with the caption: “Always great watching a Bucks game. Even better with people who love this city as much as I do! Go Bucks!”

Gonda, who is dating Abele, issued a surprise resignation from a high-ranking position within the Barrett administration in October. At the time, numerous City Hall sources indicated that they thought the move was a precursor to Abele either running for mayor himself or strongly-backing another candidate. The philanthropist gave a maximum campaign contribution to Hamilton in 2016.

The once strong relationship between Barrett and Abele is reported to have broken down over the negotiations surrounding the public funding for the Fiserv Forum. Gonda, who was dating Abele at the time, led the negotiations for the city. Barrett also made the decision not to endorse Abele in his competitive 2016 re-election bid. Hamilton backed Abele and spoke at Abele’s inauguration.

Barrett and Hamilton have a cordial relationship, with the two routinely working together even as the council has increasingly battled the mayor.

Abele’s courtside photo also includes another key player in the arena financing debate. Neitzel served as the Secretary of the Department of Administration under Governor Scott Walker during the financing debate.

Hamilton has not publicly announced a campaign for mayor. And despite creating the campaign finance account, Hamilton, and the other candidates, still need to circulate nomination papers to appear on the ballot.

The alderman, a graduate of Marquette University and Riverside University High School, was rumored to be a possible mayoral candidate in 2017 when Zielinski announced. Hamilton earned a law degree from Texas Southern University. Prior to his election to the council Hamilton worked as a teacher.

Should he run and win, Hamilton would be the first African-American elected to the post of mayor. Marvin Pratt, the longtime council president, served briefly as mayor following the resignation of John Norquist in 2004.

In a statemement, Hamilton said: “People from across our City have expressed a need for new leadership and a true vision for the future of Milwaukee. Many people are asking me to prepare to be a candidate for mayor. I am currently taking this request under consideration and I expect to make a decision and have a formal announcement in the coming weeks. The committee registration filing is a first step in that direction.”

All elections of City of Milwaukee offices are non-partisan. The two top vote getters in a February 2020 primary will advance to the April 2020 general election.

While Barrett holds a clear fundraising and name recognition advantage in the race, Hamilton and Zielinski have found themselves sparring for months.

Exercising his authority as council president in June, Hamilton removed Zielinski from his powerful post as chair of the Licenses Committee.

In a comment to Urban Milwaukee on why he removed Zielinski, Hamilton said: “There were a number of issues, some have been reported on already… He was very clearly running for mayor, not present enough to be able to take on these responsibilities.” But if Hamilton’s now running for mayor, will he hold himself to the same standard?

The two engaged in a public war of words in October that ended up revealing an ongoing criminal investigation into the troubled Health Department. In response to a press release from Zielinski, Hamilton issued an open letter that read in part: “We are, as a City, trying to respond appropriately to this crisis while you and your accomplices offer only criticism and conspiracy theories wrapped in misinformation and confusion. So, as your leader, I ask that you excuse yourself from the table where the hard decisions are being made or I, by God’s will, will excuse you…again.”

And this Tuesday, during the full Common Council, the two traded subtle jabs. Zielinski took the unusual step of denying Hamilton unanimous consent to change his vote on a procedural vote. Hamilton then shot back by declaring Zielinski “absent” on a vote when the latter briefly left the council chambers, while granting Ald. Robert Donovan “excused” status under similar circumstances.

According to Zielinski, the feud goes back to Hamilton’s ascension to council president. Zielinski says that to earn the backing for council president of Donovan, Mark Borkowski and himself, Hamilton had promised to deny Barrett’s reappointment of Department of City Development Commissioner Rocky Marcoux, and then went back on the deal.