Four candidates vying to advance to general election. First in our series of previews. 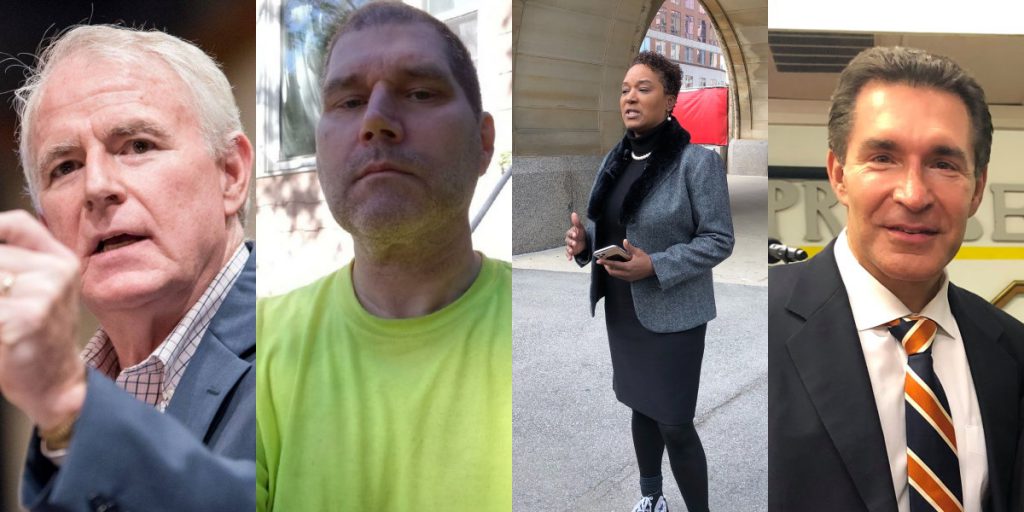 Our first installment covers the four candidates running for a four-year term as Mayor of Milwaukee. The top two vote-getters in the primary will advance to the April 7th general election.

Below you’ll find basic information provided by the candidates themselves and a link to any available campaign resources. And if you click on their name you’ll be brought to any stories written about the candidate. Candidates names are listed in alphabetical order.

His mother was from Door County, and his father made his home in the Badger State after the United States Army Air Force (USAAF) deployed him to Oshkosh for training during World War II.

Tom’s parents settled in Milwaukee, where they raised Tom and his brother and two sisters in a middle class home on the city’s west side.

Tom grew up cheering for the Braves, and of course, the Brewers, along with Badgers, Warriors, and the Packers.

He worked in high school as an usher at County Stadium. He would go on to graduate from college and law school at UW-Madison, spending time in between working on the assembly line at Harley-Davidson.

Tom turned to a career in public service, earning a reputation for his integrity, for his respect of diverse views, his ability to bring people together, and for his hard work.

As Mayor of Milwaukee, he’s created, attracted and saved jobs, solved a budget crisis, substantially reduced crime, and worked to keep the economy on track.

Recognizing we go farther when we go together, Tom helped create the M7 — a regional, bipartisan economic development group comprised of the seven counties of southeastern Wisconsin. The organization’s cooperative efforts have attracted and retained hundreds of jobs across the region.

With Tom leading the way, long abandoned industrial areas like the Menomonee Valley have been transformed into thriving commercial centers that are home to thousands of jobs.

And in just the last year, Tom has helped Helios, Ingeteam and Palermos Pizza build or expand new factories in Wisconsin.

Tom has worked with law enforcement, community groups and residents to develop proactive strategies, and he has empowered the city’s police department with the resources and strong leadership it needs to get the job done. As a result, violent crime in Milwaukee has decreased by 20% over the past two years, and homicides are at the lowest levels in more than 20 years.

When the national economic crisis blew a hole in the city pension fund, threatening Milwaukee’s bottom line, Tom put his principles of responsible budgeting and good stewardship of the people’s tax dollars to work. He cut more than $30 million in spending — balancing the books without questionable accounting tricks, and without saddling future generations with mountains of debt by borrowing money.

Tom has always called Wisconsin home. He and his wife Kris, a teacher, have four children. Their home is in the same neighborhood where Tom grew up, and is the same area he represented in the State Legislature and in Congress. Together, the family stays true to the same Wisconsin values that have guided Tom throughout his entire life.

With an extensive experience base and 1 of kind intellectual property package, I filed papers to run for City of Milwaukee Mayor on roughly March 9, 2017. Then in 2019 entered the races for Alderperson 14th district Milwaukee & Milwaukee County Supervisor 4th District, on the frequent requests of voters. Each race is complementary giving me more than 1 chance to serve the public interest. With Milwaukee rich with opportunities & challenges a good idea. And while all of my work is invariant of if we are male or female, our ages, where we are from, our religions or absence of, what languages we speak or use, etc., I will focus resources & effort where it needed the most without negativity disrupting people, businesses, organizations, etc. those that don’t. In office I will work with existing businesses et al to expand & strengthen their bottom lines ( financial positions ) & life positions. I have a number of programs ready to go here that should help all lower their stress levels.

I have a number of advanced degrees from well known universities, work or plan to internationally. All of this helps make Milwaukee more of a destination, lets it sell into more markets or sell more into existing ones, gives people opportunities they may not have locally. The work I do in finance is so wide ranging & specialized that is unparalleled; ex: I design financial markets and am one of the few, anywhere, that actually could build out the hardware, software, regulatory apparatus, etc. Even the digital communications needed. All with any degree of fairness desired. I’ve recently done work on how to launch currencies, like the USD, Euro, etc, should an existing one completely fail. I literally can start an economy from nothing. And do so in an optimal or near optimal way. I further do work in languages that can increase our safety & privacy without compromising anyone’s national or corporate/ etc security. These efforts tie into a much wider set of in security and public safety / judicial systems i’ve readied for market / the public sector. All of our neighborhoods can and will become safer.

Everything I do or will in public office/ the private sector is done to medical standards – ie, ‘ first do no harm. ‘ Unlike others, anyone else, etc. I am a trustee when it matters the most. Being able to model systems ( populations – that is us: u & I ) to any degree of complexity, interaction ( feedback ), size ( 1 to billions ), etc is what qualifies me to be City of Milwaukee Mayor, Alderperson, and a County Supervisor – individually or AT THE SAME TIME. Why you should vote for me, give me all three, etc. is because I know that the “data points” are real lives, people, family/ etc businesses, that can’t fail or be hurt. That compassion & empathy I have for you and others gives us the chance to solve long-standing problems & address needs so far not solved or met. We will grow our economy and standard of living together, as a team. Also true is I can do much or all of this while lowering city taxes and fees while Increasing City Services to all constituencies with far less rules and enforcement actions. But none of this is done at the expense of City Employees, the Police, Firefighters, EMTs, Veterans, The City’s vendors and service providers – they count as well & can all too often be neglected or under appreciated .

Lena C. Taylor is serving her fourth term as a Wisconsin State Senator, representing the 4th Senate District, which includes portions of Shorewood, Wauwatosa, Glendale, and Milwaukee.  Elected to the Wisconsin Assembly in 2003 and to the Wisconsin State Senate in 2004, Taylor served as the first African-American Chair of the influential Senate Judiciary Committee and the first African-American woman to co-chair the powerful Joint Committee on Finance. Taylor currently serves on the Committee on Insurance, Financial Services, Government Oversight and Courts, Judiciary and Public Safety, Utilities and Housing, and the Joint Review Committee on Criminal Penalties.  Taylor has been an extremely effective legislator and seeks to bring those skills back to represent her hometown.

As a Milwaukee native, Taylor still lives on the block she grew up on.  She is a graduate of Rufus King H.S. and the University of Wisconsin-Milwaukee.  After earning a law degree from Southern Illinois University at Carbondale, she practiced as a Public Defender.  Eventually, she opened Taylor and Associates Law Office, a general practice firm in Milwaukee before going to the legislature.

Lena is passionate about her work and serving the needs of her district.  It is that drive that propelled her decision to run for Mayor.  With Milwaukee often leading the nation in negative indices, Taylor is committed to addressing social determinants that cause persistent economic, health and safety issues.  Innovative and unwavering in her embrace of technology, Taylor is eager to help Milwaukee redefine and re-imagine  its identity.  Lena knows that we have talented residents, resources, and the ability to create a city that is inclusive, vibrant, and progressive.

Taylor believes that while Milwaukee has experienced some growth, it has not kept pace with what is needed to ensure all of our residents are afforded a quality life.  Whether attracting and retaining talent, or providing needed education, skills, and opportunities, Taylor understands that a rising tide should lift all boats.  If the tide doesn’t come in, Lena believes we are obligated to do the heavy lifting to provide the changes we want to see in Milwaukee.

For years, Senator Taylor has partnered with Greater New Birth Church to host monthly free legal clinics for those in need.  Taylor is the proud mother to her son, Isaiah. And as always, Lena Taylor is here to serve!

Alderman Tony Zielinski was first elected supervisor of Milwaukee County’s 12th District in 1988 and was re-elected in 1992, 1996, and 2000. He served as chair of the Judiciary, Safety and General Services Committee and as a member of the Personnel Committee.

Tony was first elected to the Milwaukee Common Council as Alderman of the 14th District in April 2004. Alderman Zielinski won re-election in 2008, 2012 and 2016. Tony is a member of the Community and Economic Development Committee, and Judiciary and Legislative Committee.

Alderman Tony Zielinski attended St. John’s Military Academy in Delafield, Wisconsin, graduating in 1979 with the school’s student rank of Second Lieutenant. He received a Bachelor of Arts degree in political science from the University of Wisconsin-Milwaukee, a Master of Business Administration degree from Cardinal Stritch University, and a Juris Doctor degree from Marquette University Law School.