A report released Monday by the Wisconsin Elections Commission shows that thousands of absentee ballots were rejected or never returned in the April 7 election, but that proportionally the amount of ballots not counted did not differ from past elections.

The April 7 election was held under controversial circumstances as debates rose over the use of in-person voting during a pandemic. In response, more than 1.3 million Wisconsinites requested absentee ballots.

A total 1.8% of ballots being rejected does not differ much from recent spring elections. In 2016, the last presidential primary, 2.5% of absentee ballots were rejected. 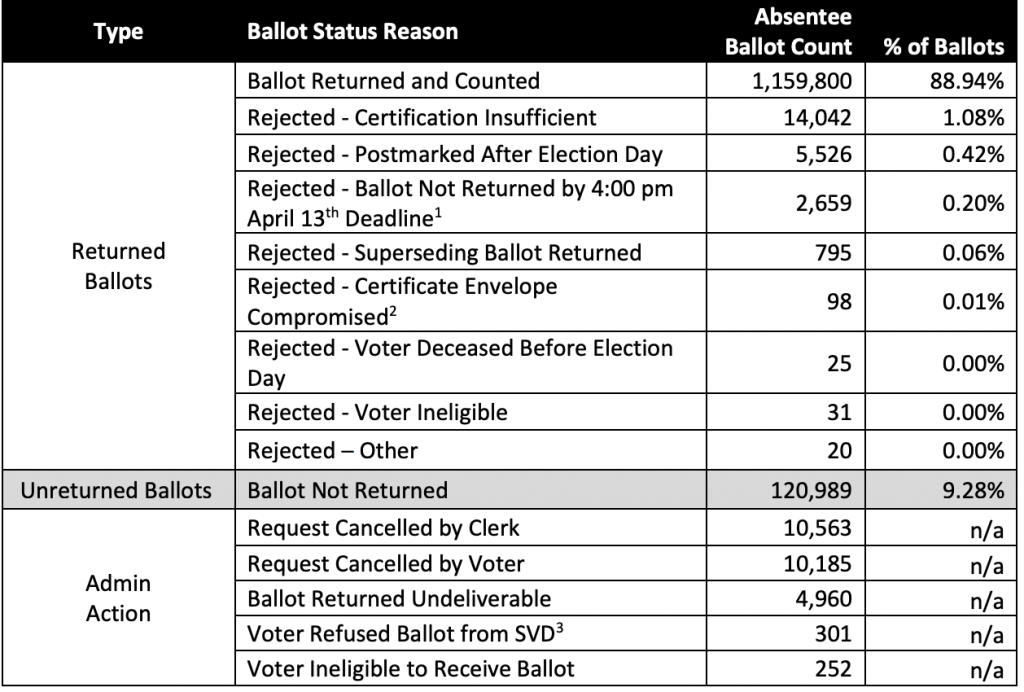 The percentage of absentee ballots rejected or not returned didn’t differ much from previous elections. Table from the Wisconsin Elections Commission.

“Both the ballot rejection and unreturned ballot rates were consistent with or lower than the previous rates,” the WEC report states. “This comparison does not seek to downplay the concerns and experiences reported by voters who had difficulty receiving or returning their ballot or voters who could not meet the witness requirement due to COVID-19 concerns.”

The report also assesses complaints and issues with the April 7 election brought by voters and clerks and offers solutions for the state as it heads toward the fall primary in August and the general election in November.

With the 2020 spring election setting a number of records for use of mail-in voting, municipal and county clerks faced an onslaught of requests and tasks as they also adjusted to guidance and rules that were changing by the minute.

“The most fundamental challenge faced by election officials was simply meeting the unprecedented demand,” the report states. “In addition to keeping up with the requests for mailed absentee ballots, clerks continued to service voters in their office wishing to participate through in-person absentee voting. Even the smallest of jurisdictions were not immune from the increased demand. While they did not have to contend with thousands of requests, individual town clerks often worked alone and with limited resources.”

The report addresses some of the problems the United States Postal Service reported in the days following the election. Bins of ballots were found without ever being sent, envelopes returned without clear postmarks and some voters said they never received requested ballots.

The report says WEC has been “unable to learn anything” about specific inquiries, but the commission has been working with the USPS to refine systems for the fall with measures such as intelligent bar codes that can better track ballots once they’re in the mail.

To deal with what is expected to be an even larger demand for absentee voting in the fall presidential election, the WEC proposes some efforts that can be made to help ease the process.

These solutions include better outreach to voters, simplifying forms and processes for less tech-savvy voters and providing more resources to local clerks.

“The April 7, 2020 election introduced countless challenges that Wisconsin clerks successfully overcame, enabling a record number of voters to cast their ballots through the absentee process,” the report says. “Moreover, the final election data conclusively indicates that the election did not produce an unusual number of unreturned or rejected ballots. Despite the overwhelming success of absentee voting as a whole, the experiences leading up to election day were not trouble-free and illuminated several critical areas for improvement.”

The WEC will hold a special meeting to discuss the report May 20 at 4 p.m.