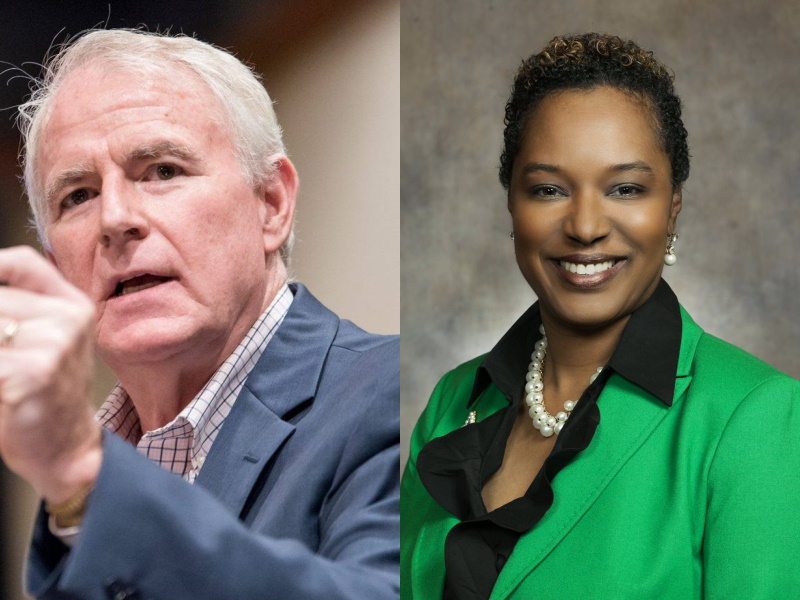 Tom Barrett and Lena Taylor. Photos from the candidate and state records.

The COVID-19 pandemic has effectively eliminated any chance of a face-to-face debate between incumbent Mayor Tom Barrett and challenger Senator Lena Taylor. But the two candidates still participated in a forum Monday afternoon hosted by the Wisconsin Policy Forum.

Each candidate faced a half hour of questions and follow-ups from WPF President Rob Henken from the comfort of their home. The forum was broadcast live on YouTube and recorded for future viewing (available below).

Why should Barrett, first elected in 2004, be given another four-year term? “I want to be the steady handy that navigates through this,” he said. “The instability that we’re facing calls to have leadership that is stable, that works with people, that understands the pressure we’re under… It’s not the time to have tumultuous leadership at City Hall.” He said that plenty of change would happen with no incumbent running for City Comptroller or County Executive and a contested race for City Attorney.

Taylor, a member of the Wisconsin State Senate since 2006, noted she is only the second female African American to serve in the legislative body and committed to all of Milwaukee. “Leave Tom Barrett and vote Lena Taylor because he does not think about equity,” said Taylor. Talking about the need for an integrated approach to improving the city’s different school systems, Taylor said, “we need a Mayor that is not afraid to say we need everyone at the table.” She said she would focus on wrap-around services from the city to help residents, particularly those in school. “I am the example of what will happen for our residents, for our young people if we put supports around them.”

Barrett, who spoke first by virtue of a coin flip, said he will continue to fight for the city. “I don’t give up. I never give up,” said Barrett. He said he continues to back a one percent sales tax. “I am now more optimistic on that issue than I have been for some time,” said Barrett after noting a hearing was held by the state Legislature on the measure.

He said the city would need help from the state to improve its fiscal situation. “Right now the budget for the Milwaukee Police Department is larger than the property tax levy for the entire city. That’s not sustainable even in good times.”

But Taylor said Barrett’s relationship is strained because of his actions. She said The Hop and its lack of a farebox system shows that he cares only about wealthy downtown residents and sends a bad message to state officials. “Those federal dollars were supposed to be used to move people to work,” said Taylor of the streetcar system in the central business district.

What about the one percent sales tax and MPS referendum? “I’m going to leave those things up to the people,” said Taylor. She said she previously backed a one-percent sales tax in 2008. “I’m not confident in how the mayor would use those dollars,” said Taylor. Barrett’s proposal calls for statutory limits requiring the funds to go for public safety, public health and property tax relief.

Taylor had her harshest criticism for Barrett around the election itself. Taylor said Barrett had entered an early voting site while voting was going on, a violation of state law. “That’s why I’m filing a lawsuit to say that he is in violation of the Voting Rights Act,” said Taylor.

“He’s using, and I think it’s ethically challenged, the virus to stay in office,” said Taylor of Barrett’s closure of early voting sites. “The mayor is breaking the law every way he turns.” Barrett has previously said the sites were closed as a result of worker shortages. The city has since opened a downtown drive-thru early voting site and drop off centers for absentee ballots across the city. Barrett continues to call for a mail-in only election. “If I needed additional poll workers I would have asked the National Guard to come in,” said Taylor. She said not everyone has access to the downtown site. “As a mayor, he should be standing up making sure people are franchised, not that they are disenfranchised.”

What about the city’s COVID-19 response? Barrett said he has been involved in hourly coordination between the city and other public and private entities. “I don’t think this is a time to throw out that coordination, cooperation that’s going on right now and the seriousness of it,” said Barrett. He said the city has led on this issue compared to places like New York City. “We started taking actions before we had a serious issue with the number of people testing positive because we could see this coming.”

Taylor said she’s the real leader. “I’ve already been leading,” said the senator. She has been actively using her Facebook page to encourage people to stay home when possible and issued press releases calling for the city to relax parking enforcement and the state to clarify its gathering rules before both entities did so. “He is always late to the party. He never has a sense of urgency for the people.” She accused Barrett of using the crisis to get free television airtime when the Health Commissioner should be the individual out front. She said she was ready to serve on day one. “I will be able to work with those individuals in the same way. I’m doing it every day now.”

She closed her remarks talking about a proposal to levy a city tax on Uber Eats, which the City Attorney’s office has said would violate state law (Taylor disagrees). “Just think if we had the fee that I wanted to do… we might have some other revenue,” said Taylor.