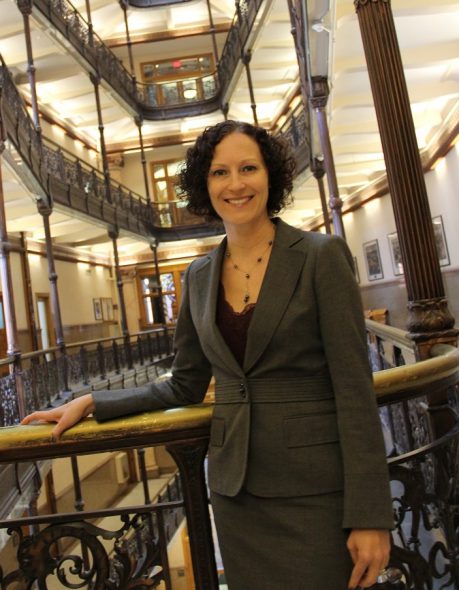 Jennifer Gonda. Photo from the City of Milwaukee.

The head of the Milwaukee Water Works is resigning to take a job at UW-Milwaukee.

Jennifer Gonda, who has worked for the City of Milwaukee for 17 years, will leave the waterworks after 18 months on the job. In a resignation letter submitted to Mayor Tom Barrett and City Engineer Jeff Polenske on September 28th, Gonda says she will become the Director of Strategic Partnerships at UW-Milwaukee.

“Sometimes new opportunities are too good to let pass by. Therefore, I wanted to share with you directly that I have accepted a new position at UW-Milwaukee,” Gonda said in an email to other city officials.

In her role as superintendent of the Milwaukee Water Works, Gonda has become the city’s point person for charting a plan to replace the more than 70,000 lead laterals that connect buildings to the city’s water supply. She also was a key person in the city’s negotiations with Waukesha regarding a 40-year, $286 million plan to sell Milwaukee water. In a letter, Gonda says: “I am leaving the utility in a much better place than I found it.”

The Milwaukee Water Works, a city-owned entity that sells water to 16 municipalities, has a $92 million budget in 2018. The 2018 budget lists the division as having 406 employees.

Before taking the waterworks jobs, Gonda served as the city’s top lobbyist. Her resignation letter touts her work in that capacity including phasing out a school choice funding flaw, negotiating the Fiserv Forum deal and “changing an unfair law that allowed police officers to be paid after discharge.”

Gonda started with the city as a fiscal planning specialist.

Her last day with the city will be October 19th.

Barrett now finds himself with two major infrastructure vacancies in his administration. Ghassan Korban “retired” as Commissioner of Public Works in August to take a high-paying job in New Orleans. Both mayoral-appointed positions are subject to Common Council confirmation.