Zielinski Will Run for Mayor

Alderman declares for mayor, two years before the election, and police union endorses him. 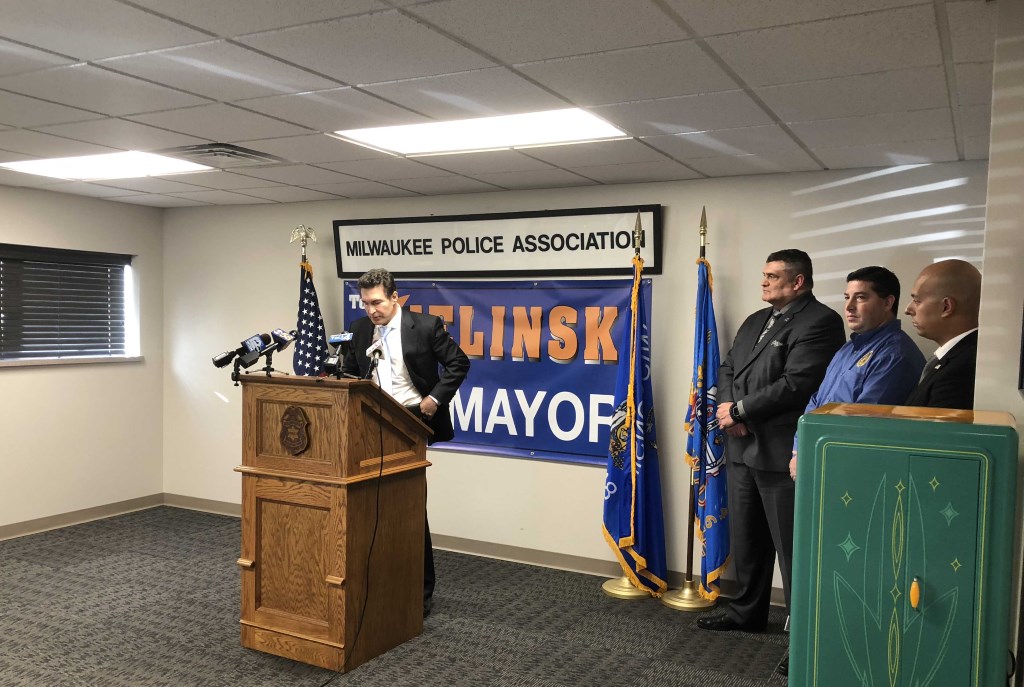 “I don’t do things the way everyone else does.”

So said Alderman Tony Zielinski, explaining why he’s announcing his run for mayor today, more than two years before the election actually takes place. His unconventional stance includes announcing he won’t run for re-election as alderman and is loaning his mayoral campaign $100,000.

The longtime alderman is for many things, and opposed to one thing in particular. He’s for more police. He’s for education, jobs and economic development as a way to prevent crime. He’s for rejuvenating the central city. He’s for a better relationship with the state government. And he’s very against the Milwaukee Streetcar.

These were the highlights of his 10 minute-plus speech announcing his candidacy at the headquarters of the Milwaukee Police Association on the far west side of Milwaukee. The location was not chosen at random; before Zielinski took the microphone he was endorsed by the MPA and union president Mike Crivello, the Milwaukee Police Supervisors’ Association and their leader Carmelo Patti and National Latino Peace Officers chapter president Alexander Ayala.

The Bay View alderman has had a lengthy career in politics. He was first elected to the Milwaukee County Board of Supervisors in 1988 at the age of 27. In 2004 he traded the courthouse for City Hall, running and winning a seat on the Common Council. In 2009 he had a brief run for Lieutenant Governor. Sources began telling Urban Milwaukee Zielinski was thinking about running for mayor more than a year ago.

The alderman, one of the most active on social media, has earned the strong support of many constituents by responding directly to their concerns on Facebook. However, any post on the Bay View Town Hall Facebook group about anything remotely political is met with at least one disparaging remark about the alderman. Despite that, Zielinski has decisively won his last two elections for the council, including 68 percent of the vote in 2016.

Zielinski has a unique political history, favoring hard-edged law-and-order policies during his time on the board, including proposing the sale of organs from dead welfare recipients and banning nicotine and coffee for county jail inmates. He also voted for the infamous Milwaukee County pension scandal, a move he says won’t be an issue in this race. “I was lied to” he told the small audience at his announcement, before ticking off the variety of lawsuits that came from the vote.

Until the past couple of years he’s leaned much more to the left while on the council, earning the support of a number of labor unions, by sponsoring everything from a city loan for an aquaponics company to locally-made city uniforms. But recently, he has developed a distinctly conservative flare, attacking police chief Edward A. Flynn and the streetcar at every turn, including multiple times in his speech today. He told the audience “I’m for a police chief of the 21st century.”

“I can guarantee people one thing, that there will be no expansion of the streetcar,” Zielinski said. He’s also for shutting the existing system down, something he admits he’s still exploring. Zielinski told Urban Milwaukee he’s exploring how long the streetcar must be operated before it can be closed without having to repay the millions of dollars in federal grants used to build it. But given the recent difficulty the county had in redeveloping the federally-supported Downtown Transit Center into The Couture, that could be a matter of decades. The county avoided having to return $11 million to the federal government by including a transit center in the proposed building’s first floor.

The alderman was the leading champion of spending additional city funds on police recruits in the latest budget, following the mayor’s 2018 proposal that eliminated 33 police officers. He succeeding in getting the council to add five recruits to a class in late 2018, including overriding a mayoral veto of his proposal. Next year the council and mayor will have to grapple once again with declining state aid and revenue caps that makes maintaining the $300 million police budget increasingly difficult.

Milwaukee Mayor Tom Barrett, whose term runs through 2020, has not announced if he will run for re-election. Zielinski admits he doesn’t know if Barrett or council president Ashanti Hamilton will run for mayor. Zielinski’s early declaration has helped him secure an important endorsement from the police unions, and perhaps more important, allows his campaign to accept maximum contributions of $6,000, a more than six-fold increase on the aldermanic limit for donations.

The mayoral primary will be held in February 2020. The general election is scheduled for April 2020.

Does Zielinski Stand a Better Chance Than Donovan?

Alderman Robert Donovan ran against Mayor Barrett in 2016 and found out the hard way that a campaign built around opposing the streetcar and demanding more cops isn’t on its own a winning platform. Barrett trounced Donovan, winning 70 percent of the vote.

Zielinski says he offers more than his frequent ally Donovan, noting he has a record of voting for pro-environment issues, supports redeveloping the central city, and favors a crime prevention strategy that is far more than adding more police officers. He notes his COP House initiative, replicated from what he has seen in other cities including Racine, would better connect police and the community. He also suggested a partnership with Milwaukee Public Schools targeted at one pilot school that would include comprehensive wrap-around services to combat poverty.

The Bay View alderman also won’t be running for re-election for his council seat. Things went so bad for Donovan that he almost lost his own aldermanic seat, having run for both alderman and mayor at the same time. Zielinski told the audience he is done at the local level, and will endorse county supervisor Marina Dimitrijevic for his seat.

11 thoughts on “Eyes on Milwaukee: Zielinski Will Run for Mayor”