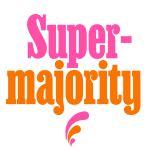 Kicking off with Stacey Abrams in Atlanta on September 15, the tour will make stops in 14 states and the District of Columbia in just two and a half weeks and feature several other prominent women, including Fatima Goss Graves, Mary Kay Henry, Paola Ramos and more. During the tour, Supermajority Education Fund will roll out the Majority Rules — our vision for how women can live, work and rise together. The Rules were informed by listening to tens of thousands of women through in-person discussions, focus groups, online polling and targeted research, including more than 60,000 women who took The Women’s Poll. The Majority Rules will anchor the organizations’ work to influence the public debate and serve as the rallying cry for millions of women, no matter their background, race or generation.

“Women are not a special interest group,” said Ai-jen Poo, co-founder of Supermajority and Executive Director of the National Domestic Workers Alliance. “Women are the majority of the people in this country and we are the most powerful force in America. It’s time our leaders acknowledge us, look like us and represent us. This bus tour will reach women across America who are doing more than resisting; they’re taking action to better their lives, their communities and their country so we can rise together.”

Supermajority will also host several 2020 Democratic presidential candidates at stops along the way that turn typical voter forums on their head: instead of candidates speaking to women, women will speak to the candidates about the issues affecting their lives. Real women and presidential candidates, including former Secretary Castro, Senators Harris and Amy Klobuchar, and Mayor Buttigieg, will be at events that will also be live streamed to the Supermajority and Pantsuit Nation communities across the U.S. Women who join the events online will have the chance to interact with the candidates and ask questions.

This one-of-a-kind bus tour will meet with women at union halls, small businesses, college campuses and in living rooms. By reaching women where they are, Supermajority Education Fund and Supermajority will help grow women’s power and influence, building on the unprecedented momentum that shaped electoral participation in 2018.

“Women, and specifically women of color, are holding up more than half the sky and yet we still don’t have the political power we deserve. That’s why we’re getting activated — women are adding oxygen to a movement that is spreading like wildfire across the country,” said Alicia Garza, co-founder of Supermajority, co-founder of Black Lives Matter Global Network, and principal of Black Futures Lab. “This bus tour will support that movement by training, motivating and helping women realize and actualize their power. Our launch of the Majority Rules will help all of us take action so we can live, work and rise together.”

Women are 51 percent of the U.S.; they make up half of the American economy and are the majority of organizers, donors, activists and voters across the country. Yet, in 2019, women and women’s rights remain under-represented, marginalized and under attack. For example:

“Women have always been powerful in their own right, but too often, we have been excluded from the political decisions that shape our futures,” said Cecile Richards, co-founder of Supermajority and former President of Planned Parenthood Federation of America. “This bus tour is an opportunity for our leaders — from the community level to the halls of Congress — to hear directly from women and speak to them about how they will ensure the issues we care about, our Majority Rules, are treated like the national priorities that they are.”

Over the past two years, the world has seen what happens when women — the most powerful force in America — mobilize, many for the first time. Surveys show one in five Americans have participated in a march or protest since 2016. The biggest issue driving these actions is support for women’s rights. Women donated $100 million more to campaigns in 2018 than they did in 2016. And in 2018, women made up 53 percent of the electorate, propelling a record number of women, and women of color, into office.

The bus tour will galvanize this energy and make stops in diverse communities across the country, including:

All references in this release to organizations other than Supermajority and Supermajority Education Fund are for identification purposes only.

Supermajority is a new home for women’s activism and a community for people of all backgrounds, races, and ages who want to fight to make sure all of us are treated equally, no matter our gender. Supermajority will train and mobilize 2 million people, who will then help activate millions more in their communities, to make sure our voices are heard and a women’s agenda is represented in policy debates, in legislative fights, and at the ballot box.

Supermajority Education Fund focuses on research about the role and standing of women, educates the public about issues of importance to women, and supports policies that advance women.