Timed for Democratic convention, local poets declaimed the “State of the Union in Stanzas.” 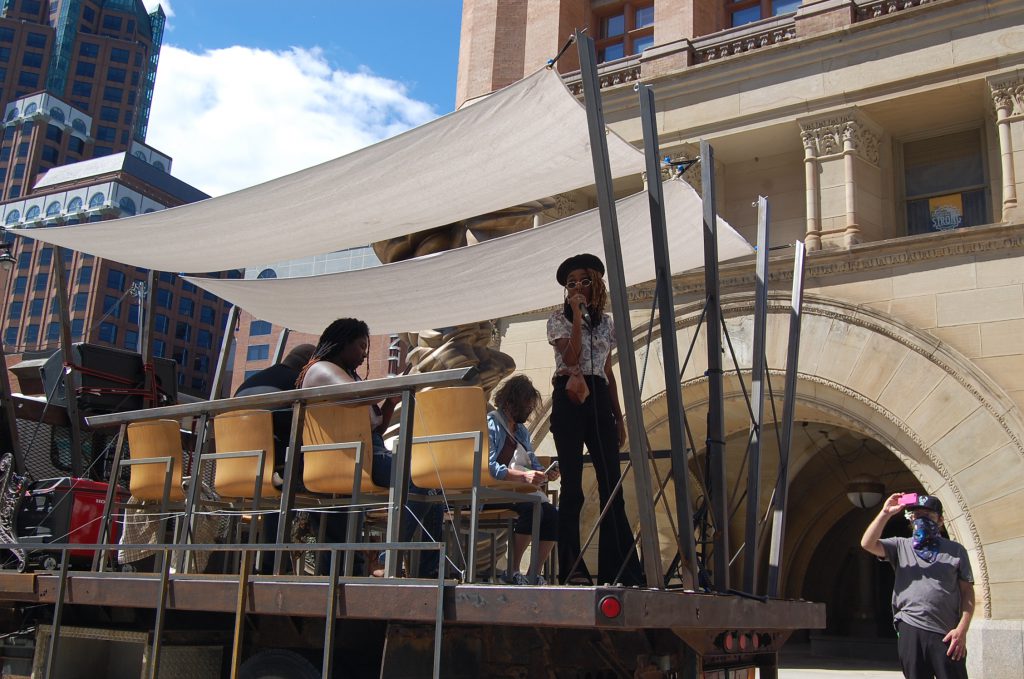 “State of the Union in Stanzas.” Photo by Ethan Duran.

A group of poets organized by Dasha Kelly Hamilton rode through downtown Milwaukee and recited verses about racism, police brutality and climate change through a loudspeaker mounted on a flatbed truck on Tuesday afternoon. Though they found the area around the Wisconsin Center desolate, the “State of the Union in Stanzas,” as their effort was dubbed, picked up audiences at other locations in Downtown.

Kelly Hamilton, a performer and current Milwaukee poet laureate, said she began to conceive ideas for flash-mob style protests in the middle of other would-be protests after the Democratic National Convention was announced. She collaborated on the event with designer and artist Brandon Minga, who put together the Rad Mobile Stage mounted on the back of a flatbed GMC truck.

Seated in the back of the flatbed, the team rode from The Retreat (2215 N. Dr. Martin Luther King Dr.) to the Wisconsin Center entrance at W. Wisconsin Ave. and Vel R. Phillips Ave. Before 2 p.m., Wisconsin poet laureate Margaret Rozga, along with Mario Willis, Ryeshia Farmer, Sam Pekarske and Unique Russ, took turns speaking into a microphone on the back of the pickup truck and recited original material to any bystanders in Downtown.

Each of the poets shared a narrative that was important to them and reflected themes that emerged in news stories over the past few months. Farmer, a spoken word artist, recited three poems, calling on the 200 nights of marching for housing in Milwaukee in the 1960’s, the danger to women of color posed by recent police violence and wanting a seat at the table with elected representatives.

During one of her recitals, Rozga called on the audience to shout, “We hope the earth survives,” in between stanzas. Kelly Hamilton shared a visceral story about a mother fearing for her child being shot at with rubber bullets. Pekarske recited a poem about climate change, comparing the planet to a burning house.

The group gave recitals in front of City Hall and afterward at Dontre Hamilton (Red Arrow) Park before leaving at 3 p.m.

There were some obstacles along the way for State of the Union in Stanzas. An airplane that had been circling daily for a week flooded the area around Wisconsin Ave. with noise. A van with “Abortion is Murder,” pulled in front of the truck at City Hall and a man in the passenger seat bellowed pro-Trump rhetoric through a bullhorn.

“In some ways I prepared my whole life and those pieces are old,” Farmer said of her past spoken word creations.“I didn’t really prepare for this event. I came and shared what was relevant.”