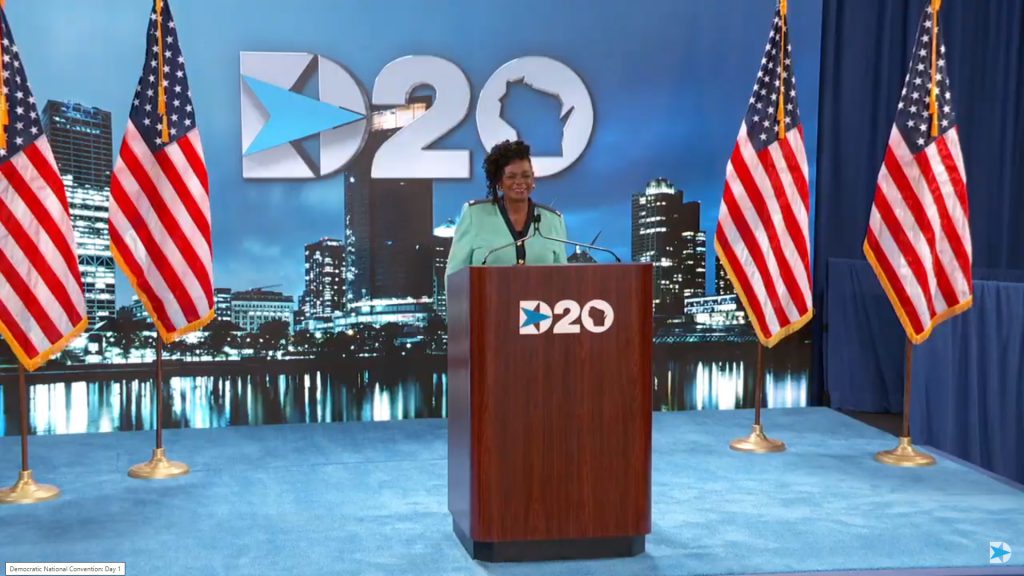 Congresswoman Gwen Moore was the first Wisconsin politician to speak at the Democratic National Convention.

“I wish you all were here in the city of Milwaukee, ” said Moore. “This is a city where blood was shed for labor rights, where a fugitive slave was freed from prison, where women’s right to vote was first ratified.”

Speaking from a stage set up in the Wisconsin Center, Moore user her time to tout “beloved friend” Joe Biden and “sister” Kamala Harris. She spoke for less than a minute and a half.

The Congresswoman is known for giving high-energy speeches that include alliterative descriptions of upcoming speakers. Monday’s speech was no exception.

She said Biden would become the country’s 46th President. “With my VIP VP nominee sister Kamala Harris by his side,” said the Congresswoman.

She spoke approximately 20 minutes into the two-hour program during a segment that wasn’t broadcast on the major broadcast networks.

“We gather virtually, however we gather unified in spirited, unified in our values and purpose,” said Moore. “If you are ready to come together America, text join 30330.”

Moore was introduced by actress Eva Longoria, who hosted the early portion of the program. “We had hoped to have our convention in the city of festivals, Milwaukee, Wisconsin, this year, of course we were not able to do that,” said Longoria in introducing Moore.

Moore’s appearance was followed by a montage of protest videos and images of the country with Bruce Springsteen‘s “The Rising” playing in the background.

Speaking at a Wisconsin Democratic Party event before the two-hour DNC program began, Moore said her “heart was broken a long time ago” because the convention wouldn’t take place as originally planned. Moore serves as co-chair of the host committee.

There were 22 people in the room where she gave her speech Monday. Had it been held in Fiserv Forum, where the convention was to originally take place, the crowd would have been closer to 18,000.

In 2016 Moore was given four and a half minutes to speak at the convention. In a press briefing Monday morning, the Democratic Party said speeches would be shorter in 2020. Senator Bernie Sanders was given the longest speaking slot on night one at eight minutes.

Moore has represented Wisconsin’s 4th Congressional District since 2005. The district’s borders include the entire city of Milwaukee as well as a handful of southern suburbs.

The convention can be watched in its entirety on DemConvention.com.

The first hour of the convention included limited images and references to Milwaukee. An opening graphic depicted Biden and Harris above an image of the skyline from 2017 that showed the city’s second-tallest building under construction.