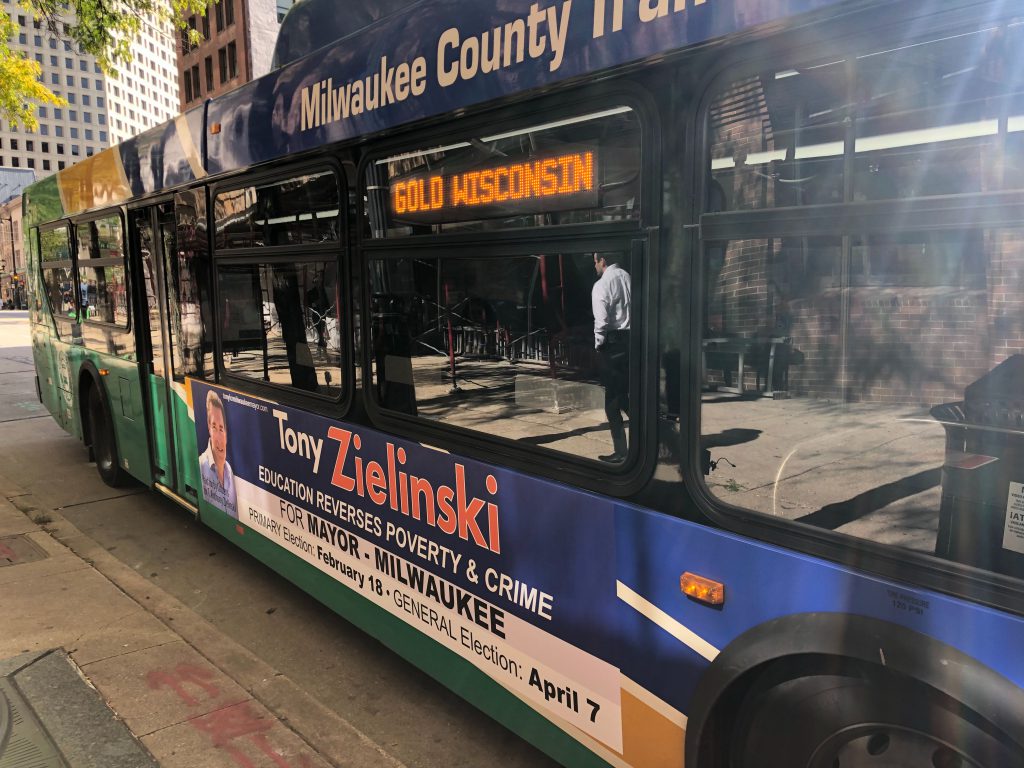 The race for mayor has its first major media buy.

The ads, for which Zielinski paid $8,000 plus installation and materials costs, will be seen on a number of MCTS routes over at least the next four weeks.

The ads feature a picture of Zielinski alongside an “education reverses poverty and crime message.” They remind voters that a primary is scheduled for February 18th with a general election on April 7th.

With MCTS operating a fleet of just over 400 buses, Zielinski’s ad buy means that approximately one out of every 20 buses advertises his mayoral campaign. Standing on Wisconsin Avenue during rush hour gives one a high probability of seeing Tony Zielinski roll past.

The buses are based out of the transit system’s W. Fond du Lac. station and will be cycled through the various routes that operate from that facility, including the popular GoldLine and BlueLine as well as routes 30 and 23.

One place you won’t likely won’t see them? In Bay View, the heart of Zielinski’s aldermanic district. The GreenLine and Route 15 run north and south through the neighborhood but are dispatched from MCTS’ Kinnickinnic Station near W. Mitchell St.

Zielinski is running in a crowded race.

According to campaign finance reports for the period through June 30th, Zielinski has $572,336 on hand to Barrett’s $811,047. Taylor’s last report filed to the state for her senate account shows she has $2,211 on hand.

All elections for City of Milwaukee offices are non-partisan. The two top vote-getters in a February 2020 primary will advance to the April 2020 general election.