"We need leadership and an office that is not corrupt," she declares. 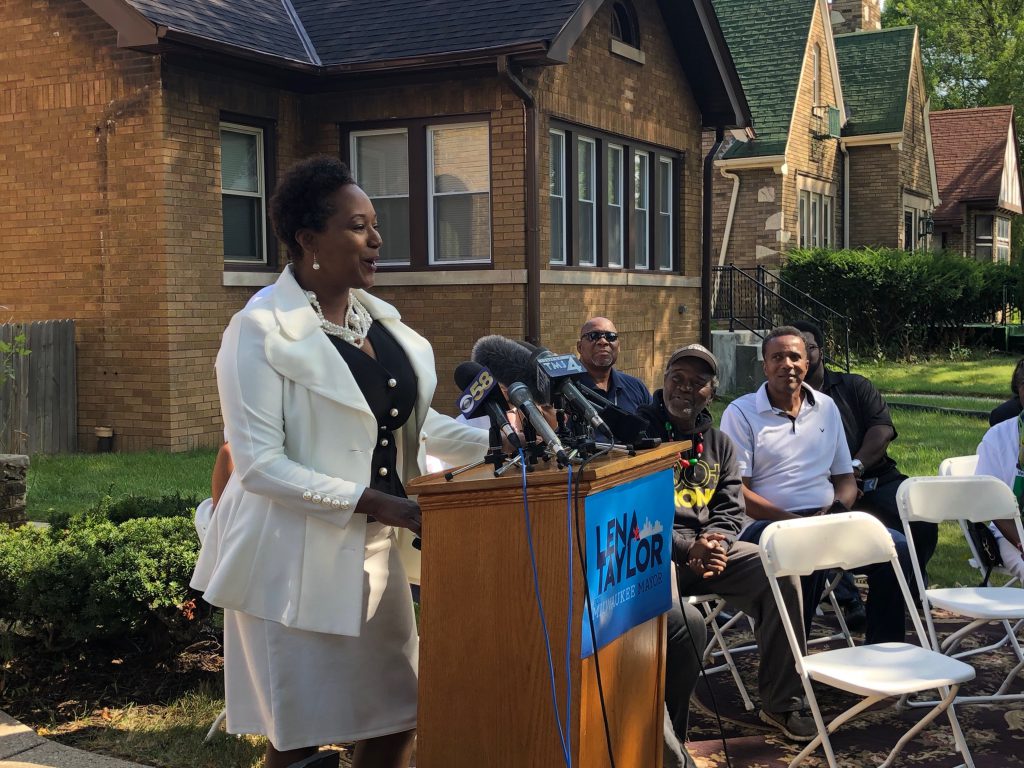 Taylor, who has served as state senator since 2005, announced her campaign with a press conference at her house near N. 15th St. and W. Capitol Dr., the same block on which she grew up.

“This is not my Milwaukee,” said Taylor to the friends, family and press corps assembled on her front lawn.

The 53-year-old declared that the city was far worse off than when she was a kid, adding that, “In my Milwaukee, when I’m mayor, you’re mayor.”

After calling incumbent Mayor Tom Barrett a “friend” and “mentor,” she noted that after 20 years change was needed: “We need leadership and an office that is not corrupt.”

The veteran legislator said that there was a lack of progress towards creating opportunities for all Milwaukeeans: “In my Milwaukee I have a vision to create health and wealth. I will work with anyone willing to roll up their sleeves.”

The senator, an African American, said she was not running to be a representative of black Milwaukee, nor just the women of Milwaukee or the mothers. “I’m not just here for one group. I’m here for all of Milwaukee.”

She said she was a “baby” when she ran for Milwaukee County Executive in 2008 and has learned a lot since then. Taylor said she’s ready to run and the city is ready for change. She called herself a “vocal” leader and did a humourous “who me?” routine when another reporter called her feisty.

Pressed for what her biggest accomplishment was at the state level, Taylor said her work on justice reinvestment and criminal justice reform. She said that while Republicans at the state level have reversed the effort, she was happy her ideas carried through to District Attorney John Chisholm and others locally. Taylor said the effort has reduced, but not eliminated, the impact of mass incarceration.

She also championed her work on urban agriculture, specifically hemp legalization and production.

What about that incident at Wells Fargo bank? asked one reporter in the media scrum around her mayoral anouncement. “There is always two sides to one story,” said Taylor of the 2018 incident that led to her receiving a disorderly conduct story. “That’s the past.”

And how about the state senate human resources investigation that found she bullied her staff and resulted in her removal from the powerful Joint Committee on Finance? Senate Minority Leader Jennifer Shilling (D-La Crosse) “was wrong for taking off of Joint Finance. I was the A team,” said Taylor. The senator pivoted to what she said was her “real-time” leadership in encouraging the 14 Democrat senators to flee the state to Illinois in 2011 during the Act 10 debate.

Taylor would not say whether she planned to run for reelection to her state senate seat. “Right now my priority is to win the [mayoral] primary,” she said.  Taylor is up for re-election in November 2020, nine months after the February 2020 mayoral primary and seven months after the April general election.

The move is a sharp departure from fellow mayoral challenger Alderman Tony Zielinski. The South Side alderman promised it was “up or out” when he launched his campaign in November 2017, promising not to also run for alderman, as Bob Donovan did in his run against Barrett in 2016.

Taylor did not mention Zielinski in her remarks. Nor did she mention potential mayoral challenger Alderman Ashanti Hamilton. The council president told Urban Milwaukee he would announce his intentions in the next week back on July 30th.

She did spend plenty of time talking about Barrett though. Taylor said Barrett wasn’t a member of the committee that brought the Democratic National Convention to Milwaukee, which flies in the face of almost two years of evidence, including Barrett joining others to announce the effort, the mayor receiving the phone call from party chairman Tom Perez to inform the city it won and hosting a number of events since the announcement as one of the leaders of the effort.

Taylor said she had the name recognition to counteract the nearly $1 million Barrett is expected to have in his campaign fund. “I know money is real, don’t get me wrong,” said Taylor. But the senator said she had collected “receipts” from the good deeds she had done.

What’s her campaign strategy? “I’m going to wear out some Converse,” said Taylor after dangling a foot clad in a white Converse shoe from behind the podium.

She was surrounded by a host of community leaders at her press conference, including Representative LaKeshia Myers (D-Milwaukee), We Got This founder Andre Lee Ellis and Priscilla Coggs-Jones.

She was also joined by her son Isiah, who was stopped by police while delivering a turkey to a neighbor in 2015. Taylor said one of her priorities would be to create a city where mothers didn’t need to worry if their children would be stopped by police for walking down the street with a turkey.

When asked about the rising cost of public safety in Milwaukee, with the Milwaukee Police Department budget now exceeding the annual property tax levy, Taylor had a quick response. “We need to be more efficient with our dollars, more effective with what we send out.”

Taylor said settlements related to MPD, for which the city has spent more $20 million in recent years, would be an area she would seek to address. She also said she would work to push through police reform efforts. She also targeted the Fire and Police Commission for reform.

“Do we have people on the Fire and Police Commission that represent the mayor or the public? Corruption has got to stop,” proclaimed Taylor to applause. She said she hoped the board would hold off on the potential reappointment of Alfonso Morales as police chief. Taylor said she does not know enough inside information about Morales, whose contract is due to expire in January, and looked forward to having a conversation with him.

The Taylor campaign will open a campaign office on September 7th at 2805 N. Teutonia Ave. The campaign website is available at GoLenaTaylor.com.

“I’m not unique, I’m really like all of the kids from Milwaukee,” said Taylor at her press conference. Still her story is different than many of the kids she grew up with.

She graduated from Milwaukee Public Schools Rufus King High School, an effort that she says involved kids that had already dropped out driving her to school and making sure she graduated.

Her mother, also Lena Taylor, ensured she got into college. The younger Lena ultimately graduated from UW-Milwaukee and earned a law degree from Southern Illinois University. The senator is an active member of the State Bar of Wisconsin and previously worked as a public defender.

Taylor won a special election to serve in the Wisconsin State Assembly in 2003 and an open election for 4th Senate District in 2004, succeeding Gwen Moore. She’s been re-elected three times, including a hotly contested race in 2016 against now Lieutenant Governor Mandela Barnes. Taylor was backed in that race by advertisements from a group affiliated with County Executive Chris Abele.