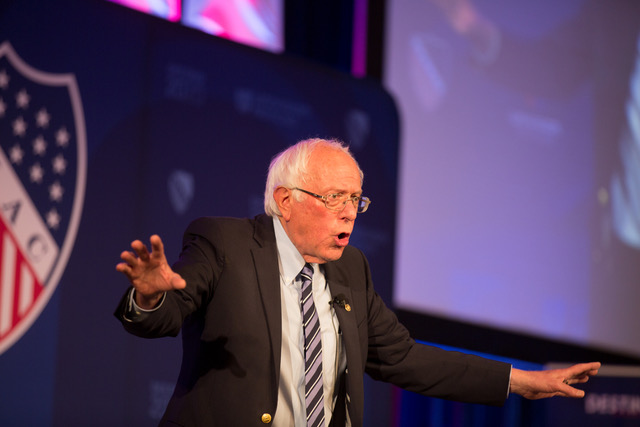 The League of United Latin American Citizens (LULAC) is hosting its 90th Annual National Convention & Exposition this weekend at the Wisconsin Center. With 24 Democrats still in the marathon for the office of president, LULAC’s organizers invited them all to speak to the convention last night, but only four accepted the offer.

More than 1,000 people filled the ballroom at the Wisconsin Center on Thursday night, not a vacant seat to be had. LULAC National President Domingo Garcia welcomed the large crowd. He said Wisconsin is a battleground state and anybody with ambitions of winning the presidency has to navigate their way through Wisconsin.

Each candidate spoke separately and sat onstage with a moderator and prepared questions were offered by the audience. First Castro spoke, then Warren, followed by Sanders and O’Rourke.

The candidates were given two minutes to introduce themselves and outline their philosophy as president. 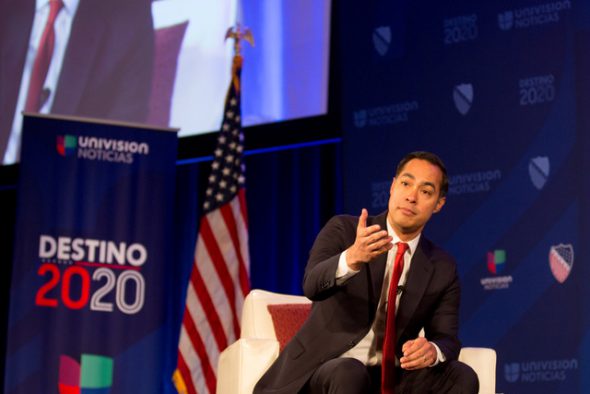 “America is broad, expansive,” Castro said. “I’m happy to be here because so many of you in the audience have made that possible.” Castro told the audience he spoke some Spanish but wasn’t fluent. “I’m from Texas and as a second generation American, speaking English was stressed. In school, they tried to beat the Spanish out of you.” Castro says the road to the White House goes through the barrios and Hispanic neighborhoods.

“Every 30 seconds a Latino is turning 18,” he told the crowd. “We know how to organize, mobilize and show up at the polls.” In regards to immigration, Castro cited the example of Irish fleeing the famine and refugees from Cuba in the 60s, saying a common denominator among refugees are dire conditions.

Castro proposes a type of Marshall Plan to help restructure countries like Mexico, Guatemala, Honduras, and give them the resources to produce and create jobs, thereby eliminating the need for people to cross the border into the United States.

He also gave a passionate plea to bring home several thousand veterans that have been deported. “The last thing we should do is deport them after they’ve so honorably served our country,” Castro said. He also said he’d like to address the teaching shortage in our country by increasing teacher’s pay, incentivize them to work in impoverished areas, and invest in teacher recruitment and retention.

Castro says he plans on spending a lot of time in Wisconsin, coming back often. When asked about his low ranking in a Washington Post/NBC poll (just one percent), Castro discounted it: “When you look at the polls, you have to question the accuracy. My favorability has gone up and we’re going to go out and capitalize on that.” 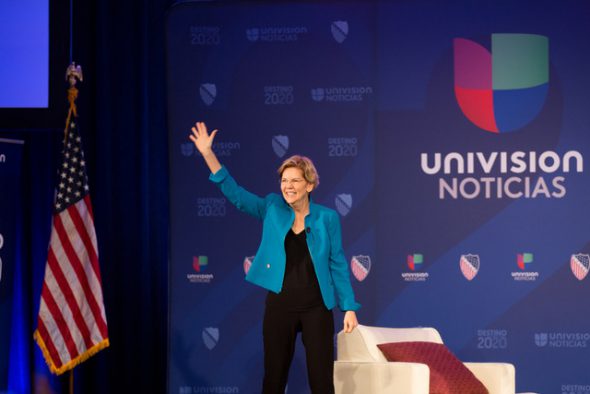 A visibly energetic Elizabeth Warren took to the stage after Castro. She said the President Donald Trump’s administration is about serving up more hurt. “If something isn’t working, he blames Mexicans, Muslims.” Warren says she supports universal healthcare and raising wages of all child care workers to the levels they deserved.

A question from the audience referenced Trump’s throwing paper towels to the hurricane victims in Puerto Rico, and Warren jumped on it. “Trump treats people like they’re not part of our country. Hard working people who don’t get the respect they deserve. I want us to be an America that fulfills the dream of opportunity,” Warren said.

Senator Bernie Sanders followed Warren, standing during most of his time on the stage. He was quick to address the issue of healthcare.

“American people do not love their health insurance companies because they know they’re making a fortune,” Sanders said. “The function of health care should not be to make huge profits.”

Sanders says as a country we’re making progress toward free education. “We can cancel all student debt in this country,” Sanders said. He did agree the United States requires a new trade agreement. Sanders said he stands by his voting against NAFTA. In past interviews Sanders has said President Bill Clinton was just plain wrong about NAFTA, something Sanders says was a sellout to corporate America and a disaster for the working people of this country.

“We need to end the xenophobia and hatred that exists in this country,” Sanders concluded.

Former Representative Beto O’Rourke came out just like he did for the last Democratic debates — speaking Spanish. But it was brief. When he returned to his native tongue O’Rourke said what President Trump proposes to do is separate thousands of families that have not committed a crime and that makes America less safe.

As the former congressman of a border district, O’Rourke has made immigration one of the cornerstones of his campaign. “If we make these people live in fear, they won’t report crimes. They won’t testify to crimes they’ve seen. We are not safe because of walls, we’re safe in spite of them.”

In the same NBC News/Washington Post poll, O’Rourke fares just a tiny bit better than Castro, at two percent, compared to Sanders at 13 percent and Warren at 19 percent.

“I want to serve this country,” O’Rourke said. “In the 2017-2018 Senate campaign we went to 254 counties in Texas. If you want to win, you can’t write anybody off. It doesn’t matter if it’s a red state or a blue state. It’s a movement, not a candidate, that will beat Trump.”

One thought on “Democrats Speak at Latino Convention”