‘Wonder’ Is Not So Wondrous

Story about child with deformed face depends on stereotypes — and Julia Roberts. 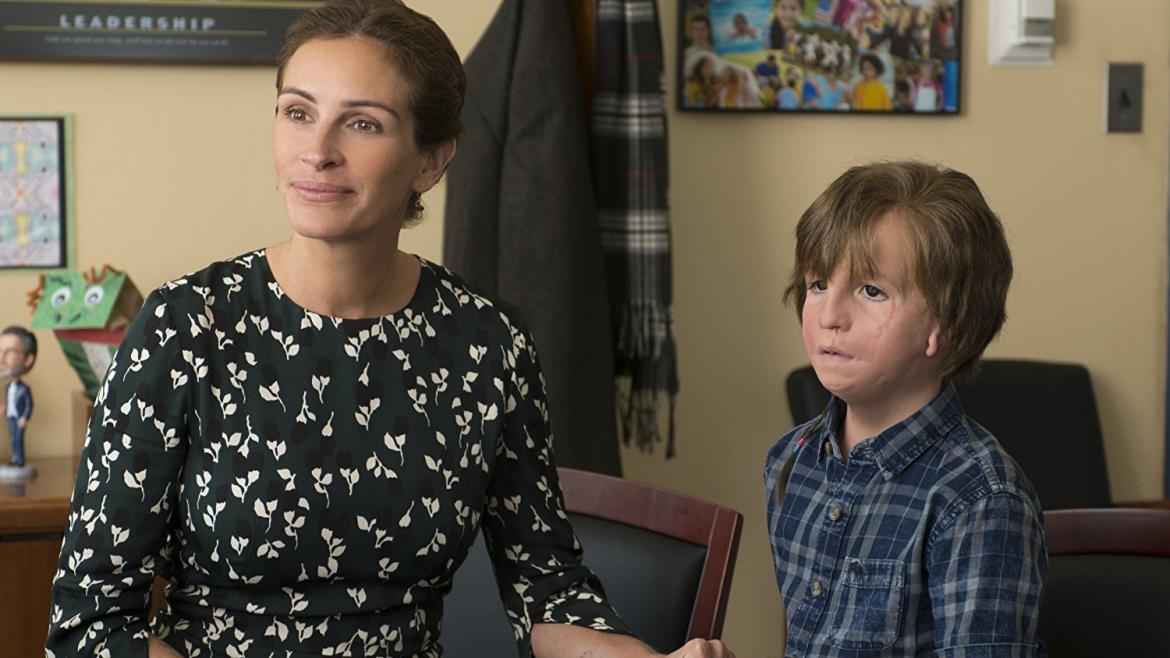 Julia Roberts and (behind the prosthetics) Jacob Tremblay in ‘Wonder’

The most wondrous thing about “Wonder” is the level of teacher skills and classroom expectations in the sixth grade in what must be one of the finest schools film-makers could find in California.

The second most wondrous thing is how dutifully and simplistically the well dressed kids in the school reflect a stereotype adult concept of good kids, bullies, intervening kids, bullying situations, on-the-spot rethinking  and redemption when confronted by a kid whose face is like a slimmed down version of “The Elephant Man,” technically the incurable Treacher Collins syndrome

The movie is not meant to be a tale of absolute generalities, like “Guess Who’s Coming to Dinner” which posited a perfect liberal household against the issue of interracial marriage.  Underneath it really means to be a sweet uplifting story pretending to real life about how the world should respond to a child whose face was messed up at birth and has evolved into a boy who only finds love within his family and hurtful stares everywhere else.

Some noted actors are wasted in the effort to reassure him – Mandy Patinkin as a sympathetic principal, Owen Wilson as the hippest loving dad in captivity, Julia Roberts, aging openly into roles of maternal dimension, and newcomer Izabela Vidovic who has the difficult task of making at least one teenager seem normal and nice.

In what this year seems a Hollywood trend, the good kids in schools are associated with the drama clubs that largely produced the current young writers of these movies. Personally, as a drama club enthusiast, I would like to believe that’s true. But like many things in the movie I feel the vision is from Hollywood on high.

The makeup artists for Jacob Tremblay – a normal looking youngster who is quite effective as the object of so much hate – merit a special award for his looks. They are totally in keeping with what the syndrome can do to a face, justifying why Auggie is so dismayingly stared at (and who among us wouldn’t), realistic enough to fool the audience and help the actor inside, and yet not so frightening that we don’t grow to like and even want to hug the son having so much trouble making connections.

It’s sort of a shame that director Stephen Chboskly (also co-screenwriter) went for students who melt so obviously in sympathy or behave so objectionably even when events and peer pressure are against them. There are also cardboard efforts to make unthinking parents at the school the real villains.

The need for the world to open up to kids like Auggie, who are just kids underneath though Auggie is also shown as a scientific genius, is a good message communicated in extreme examples, tear-inducing moments  and even an extended concluding hallelujah that puts this film on a curious list of 2017 wonders – Wonder Woman, Wonderstruck, Wonder Wheel and Wonder.

Wonder what word will dominate Hollywood titles this  year?

Dominique Paul Noth served for decades as film and drama critic, later senior editor for features at the Milwaukee Journal. You’ll find his blog here and her

2 thoughts on “Movies: ‘Wonder’ Is Not So Wondrous”