A fine coming-of-age film, yes, but surely oversold by critics. 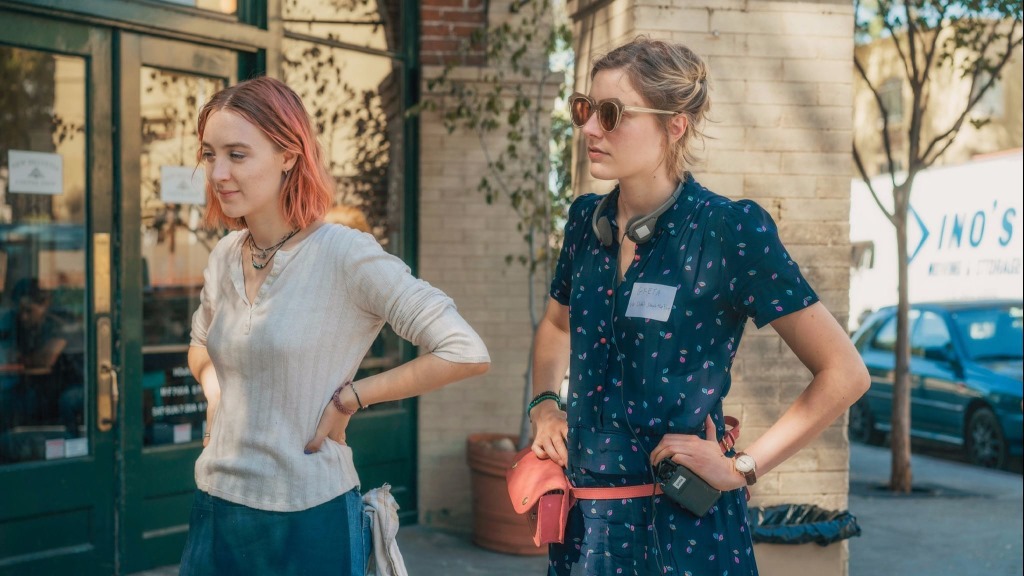 Saoirse Ronan (left) being directed by
Greta Gerwig on the set of ‘Lady Bird.’

Truly enjoyed and recommend Lady Bird as an insightful addition to the youth quest genre — a teenage girl growing up in 21st century America buffeted by the currents of romance, politics, religion and class standing.

But may I couch my praise in caution involving director Greta Gerwig? She has clearly mastered the no-nonsense, follow-the-walking-body jump-cut style of the camera, the use of quiet supportive music by Jon Brion, and has produced a perceptive screenplay of adolescent sensitivity. It’s full of the kind of snappy but disjointed dialog that could stem from an intelligent teen girl who feels isolated and confused.

Aside from a fresh take on the universality of dilemmas about sex and impermanence – as films like The Graduate before her that spoke to the confusions of the 1960s — she has struck a chord in the social times this film arrives in.

A majority of the impact comes from the fine actors digging into the script under the writer’s guidance. Saoirse Ronan, who had already won acclaim for portraying the young Irish maid in Brooklyn, is captivating as the self-proclaimed Lady Bird, blindly fighting with an overly controlling mother and toying with her hormones and social-climbing issues at a Catholic high school. Ronan is a great screen-acting mixture of ugly duckling and momentary swan without which the part wouldn’t fly. Her sharp tongue gets her in the sort of trouble and mischief that audiences cheer.

Ronan is blessed particularly in a supporting cast including Tracy Letts as her always cheerful, doting but financially inept father. His income struggles weigh heavily in the family largely through the mother portrayed spot-on with tight lip and welling eyes by Laurie Metcalf, who can’t keep from criticizing Lady Bird when she also loves her – a situation many mothers will identify with. It is in some of their exchanges that the screen play is both particularly good and particularly manipulating.

The film also involves character insights that are convincingly executed when you watch them but seem a bit too stagey in contemplation. There are moments when the high school life and messages seem not much different than the “Dead Poets Society” 29 years ago in its view of what kind of people are attracted to drama and writing.

Even as I encourage audiences to cherish Lady Bird for its insights and heart-tugs, I am a bit put off by all the hailing of Gerwig as one of the “freshest female voices of her generation” and a brilliant – as opposed to definitely watchable – entry into the directorial ranks.

First, at age 34 she has already been a decade’s presence as actress and co-writer, providing pinpoint cameos in films like 20th Century Women and Jackie and less impressive leading roles in films like Maggie’s Plan where her need for a coordinated ensemble is more evident – and that Lady Bird assuredly has, which seems a sign of real growth.

Her arrival comes at the height of feminine awareness when many of both sexes are distressed by the lack of female voices in movies and in essential roles in society. So the emergence of Gerwig and Lady Bird is also perfectly timed to our cultural interests.

This film, and some of her past writings, are also drawn from her life and family in Sacramento, tapping the feelings many share in adolescence. Let’s not put her on a pedestal until she widens her character canvas – and just enjoy the one she has given us.