A vision from “Dunkirk.”

We can’t call it nostalgia for WWII. That implies affection and a desire to bring it back, which would be horrible. But in these weird political times, the US does seem to have warmth for that WWII clarity of good and bad, right and wrong, as long as grownup sentiment and real cost (“blood, toil, tears and sweat”) are applied to our re-creation of history.

In these times we seem to desperately need the familiar themes: the fight against evil, the reliance on the spirit of the common man and something we really do lack nowadays – the power of words to motivate and even do combat.

Whatever the reasons, WWII was all over the screens of 2017. Even “Wonder Woman” was on the Allies’ side. Two current films in different genres – one a battlefield epic, the other a biography – look at British greatness and grief in 1940, before America dared enter the fray. These are overlapping examples, similar phrases from different angles with both films using some of Winston Churchill’s most famous words as a mutual crescendo.

“Dunkirk” is about the human desperation of 300,000 trapped soldiers clawing for survival, which came in the form of the average Briton — platoons of civilian ships that crossed the choppy channel to their rescue. But many died along the way, and we are never allowed to forget that.

“Darkest Hour” is a more typically structured movie biography about Churchill in his greatest moments of challenge and despair.

From a cinematic and technical standpoint, Christopher Nolan’s “Dunkirk” is the more explorative work, while strangely enough “Darkest Hour” is the more emotionally influential.

Nolan recognizes the need to tell the story of war through people — a fleeing soldier desperate to survive, a ditched pilot struggling not to drown, a lad running toward war on his father’s private craft, a calm civilian helmsman whose resolve never bends even in the face of tragedy, a mission-fixated veteran pilot (actor Tom Hardy, his face hidden behind oxygen mask for much of the film) whose dogfights serve as codas for the story.

The scale of many of the Dunkirk sequences is admirable, only sometimes dragged down by the usual pyrotechnics of movie battle scenes and claustrophobic underwater tanks. Nolan doesn’t quite break the mold despite the nonlinear storytelling that has become his signature (scene flips back and forth despite daylight or time expectations). It’s a good method, though sometimes a trap for show more than purpose. His men are gripped in fear or isolation, soaked in sea water, oil and flames — so we feel the same.

But the best score of 2017 comes from composer Hans Zimmer. He mixes orchestral themes with a background of percussion and surf-like waves that even substitute for the sounds of war.

Nolan was smart to turn to two masters of stoic stage directness, Kenneth Branagh and Mark Rylance, to deliver the most pointed heroic lines in his minimalist screenplay.

“Dunkirk” sails its cameras along the sand, in the sky and in the water, “Darkest Hour” in moments of tension drops in close on an event and then climbs to a bird’s eye view in the same shot. Yet despite such theatrics, director Joe Wright keeps the acting most prominent. 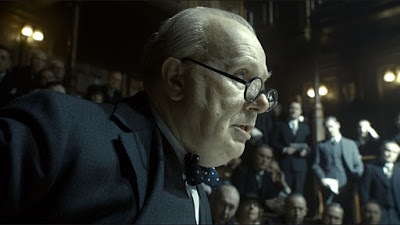 Gary Oldman in “The Darkest Hour.”

This film carries oomph because of the performance of Gary Oldman. Credit the makeup all you want on the guy most people remember as the sneering terrorist Harrison Ford threw off “Air Force One,” but the actor uses the prosthetics rather than being owned by them and finds a voice that echoes Churchill’s presence and power.

The past seasons brought us two remarkable Churchills. (Actors including Richard Burton have always been attracted to his language and voice, but makeup technology has now brought actual impersonation.) In TV’s “The Crown,” John Lithgow was a wonderfully salty Winston in his seventies. Oldman has the more vigorous Churchill in his sixties, though he still dictates from his bathtub and telephones FDR from his privy.

This was truly his darkest hour when he took over as prime minister detested by Parliament and even by the king who later loved him. He was considered crazy in his insistence on fighting on, even as Hitler squeezed closer and closer.

Oldman handles many moods, more setbacks, more testiness — even temptation to make a deal with the Germans. In attempting to show the humanity of Churchill, director Wright and screenwriter Anthony McCarten (otherwise fine work) push Oldman into the film’s most maudlin sequence – an impulsive ride on the underground where Churchill gets a trite chorus of moral support from subway riders. There had to be a better way of honoring the common people for wartime normality amid perseverance.

There’s other strong acting work for Oldman to play off of, including Ben Mendelsohn as King George, Ronald Pickup as the doubting Neville Chamberlain and Stephen Dillane as the angry Halifax. But Oldman’s best partner is Kristin Scott Thomas (20 years ago the love interest in “The Horse Whisperer”) who is only in her 50s. But she is shrewdly aged to look like Churchill’s wife Clemmie, who chides and encourages him in deft bossiness.

Both this film and “The Crown” seek to use Churchill’s secretary to explore his whims and word fixation. In this film the task falls too much to Lily James of “Downtown Abbey” fame. Director Wright loves playing off the innocent loveliness of her face, and who can blame him?

Neither is a flawless film. But because of Oldman and the best portions of the screenplay, “Darkest Hour” is more triumphant while “Dunkirk” is more daring.