‘The Shape Of Water’ Is Stunning 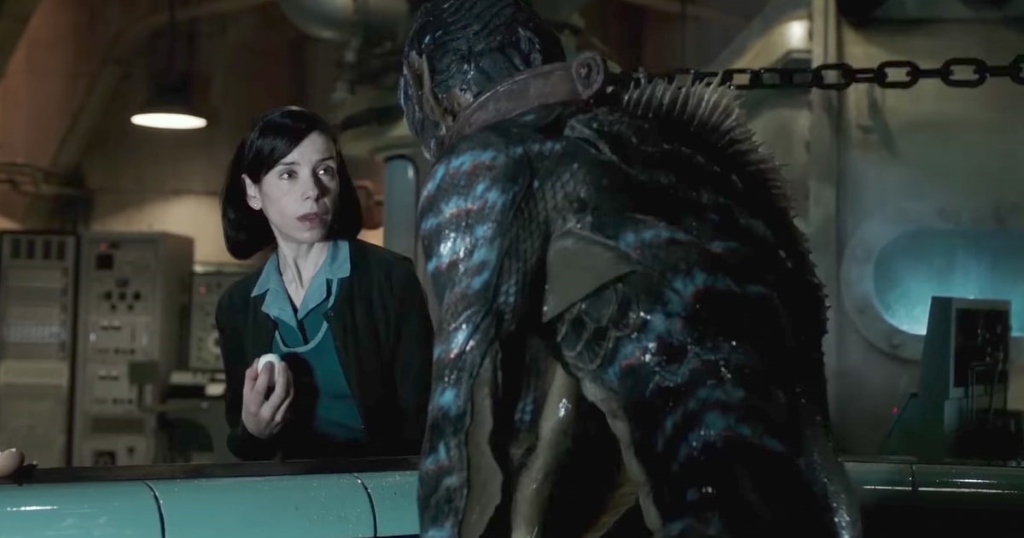 Sally Hawkins and friend in “The Shape of Water.”

Director Guillermo del Toro’s fantasies don’t escape life. They spin visions out of our casual materialism and extreme savagery and use fantasy for poetic victory by the better angels of humanity – mainly trust and friendship.

“The Shape of Water,” like his “Pan’s Labyrinth” before it, creates a dark fascist world, this time with a US security expert as its most hateful villain, brilliantly played by Michael Shannon. Wielding a cattle prod and a perverted interpretation of the American cold war dream, he is the foremost figure in a militaristic society where fantasy creature and the human misfits (a mute woman, a closeted gay) become the uplifting escape.

All the audience has to do – and for many it will be a big step – is accept the pretext of  a mute making friends and falling in love with an amphibious monster. Del Toro makes it easier by starting with the monster being bloody scary so that we as well as Elisa grow to empathize with the gentler creature underneath. That Elisa to her surprise finds him sexy is a jump to adulthood that del Toro almost makes work.

As a master of cinema with a budget as big as his abilities, del Toro employs hundreds of cinematic and matte artisans and they are not wasted in trivia, as is the case with so many computer graphics outings today. The look of a del Toro film is for today’s audience as immediately identifiable as past generations used to say about Kurosawa, Kubrich and Fellini.

Now he may also have found his own Giulietta Masina, at least for this one film. Masina was Fellini’s wife and muse in many films such as “La Strada” providing a vulnerable and even unconventional screen-star window into the human frailty within his extravagant fancies.

In “Shape of Water,” Sally Hawkins as Elisa provides a similar function, advancing from a brown-bag sharing common worker into a determined rescuer, facing up to the cold war’s only  solution to this weird sea monster — kill him. She is ironically aided by a Russian agent (the versatile Michael Stuhlbarg) who wants the monster kept for study.

Hawkins is a talented actress who hides her full versatility until del Toro needs it, at first emphasizing the expressiveness of her animated face and a subtle self-sufficiency. She becomes our doorway into a romance that is truly out of this world. With unabashed reference and chameleon similarity to “The Creature From the Black Lagoon” – a 1954 film close in time to this movie’s 1962 Baltimore — the monster of this film becomes kin with the beast in “Beauty and the Beast.”

Hawkins steals him into her own bathtub and then into her boudoir, as it were. Actor Doug Jones under all those gills and scales  plays the monster, growing in appeal and graceful movement as the film progresses.

Elisa’s next door neighbor – played with quirky talkative tics by Richard Jenkins – steps into her plot, as does a fellow maintenance worker who cadges smokes on the security dock (Octavia Spencer, relishing another outing of slang domestic chatter, dirty looks and gigantic heart). The technical elements of the escape are in some ways as unreal as the entire premise, but my, how we want them to succeed.

Part of the film’s pleasure is the use of residuals from that era – cars, TV sets and shows, atmospherics that spur much of the humor and even sneak into the plot. For movie buffs there are added jokes in the double-bill playing at the movie house under Elisa’s apartment – the biblical epic “The Story of Ruth” and the Pat Boone film with a monster, “Mardi Gras.”

Hawkins, Shannon and Jenkins are particularly strong presences within del Toro’s style, which flies off into visual exclamation points at just the appropriate psychological moment. Audiences that don’t think of themselves as sci-fi buffs will be drawn in. The movie lifts the concept of fantasy films far above the Marvel Comics world.

One thought on “Movies: ‘The Shape Of Water’ Is Stunning”