An Art Film for Today’s Generation

‘Call Me By Your Name’ is slow, idyllic, humane, and Oscar-nominated. 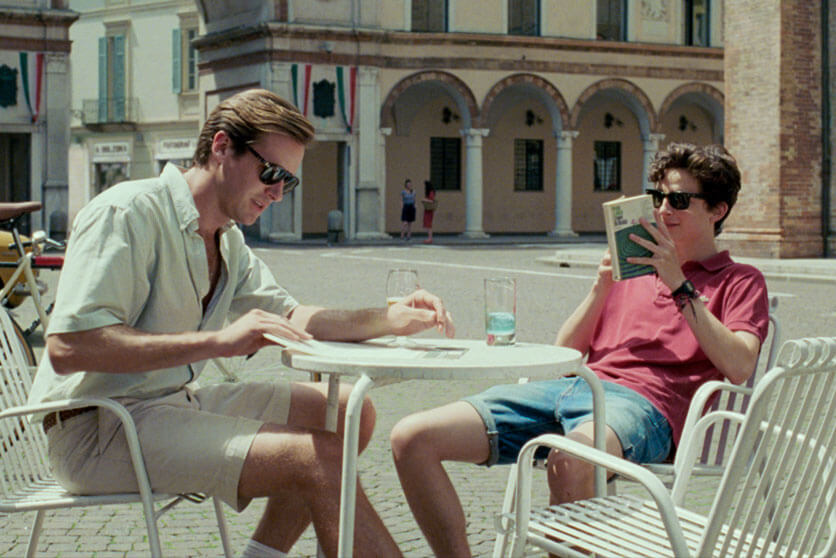 Call Me By Your Name

In long ago Milwaukee college days of the 1950s, if you wanted to see a “foreign film” you had to sneak into an adult theater, the only place the earthy side of Bergman and Fellini films were allowed. Standards loosened in the late 1960s, international became respected (though Oscar still clings to the “foreign” category) and the movie industry, even in the Midwest, created “art houses” so that the growing audience could find what were now being called “art films” – long, thoughtful explorations of the human condition set on foreign soil, cinema which little cared for the frantic pace or dramatic pyrotechnics that so dominate today’s movies.

Meet an art film that in this age has to compete on multiplex screens with more heavily touted and frankly more easily enjoyable offerings – Call Me By Your Name, an American script with smatterings of French and other languages. It has earned a somewhat premature best actor Oscar nomination for newcomer Timothee Chalamet, a slim tousled-hair hunk in the mold of director Francois Truffaut’s young alter-ego Jean-Pierre Léaud decades ago.

Granted he’s nominated for some good reasons – directness in teen angst, his body curled and his mouth hanging open in childlike passion, brave leaps into usually hidden adolescent behavior. There is believability in his portrayal of precocious 17 year old Elio (intellectual, musical, freed by his loving parents in 1983 to explore his confusing feelings), living in an idyllic Italian villa with an idyllic Sephardic family reeking of academia, where nature, biking and antiquities dot every loving frame that so mesmerize director Luca Guadagnino.

With screenwriter and near co-creator James Ivory (yes, he of a series of those highly regarded Ivory-Merchant art films) the director approaches reverence in distilling the first half of author Andre Acinman’s acclaimed novel (the author also plays a minor role).

Idyllic is a hard word not to overuse as the film breathes in the fruit trees, the lakes, the stone pools that surround a house Monet could have painted, even the handsome young girls who bike in for a visit to this rural paradise. Into this landscape comes an Adonis from America (fine performance by mature Armie Hammer as a brainy, stunningly attractive hedonist). Oliver is to be the father’s research assistant living in the house all summer. Elio is immediately wary and hypnotized by this self-confident, slightly mischievous, profound physical specimen who maybe, just maybe bears equally hidden thoughts.

This is an examination of first love that is a homosexual love story. If I describe how Elio first dallies hungrily with a neighbor girl and then, thinking of Oliver, masturbates with a peach, the physical descriptions do the movie a disservice. It is completely accessible and natural — in no scene prurient — just a candid treatment of sexual stirrings in this environment.

But unfolding all this so carefully, letting the layers of physical allure and nature intermingle, teasing us as if something unspeakable is always about to happen, requires a laborious if loving method, in no hurry for the next revelation, deliberately and agonizingly languorous. It is a bit too married to this approach for its own good, but the gripping stretches these days are an acquired taste in film-making. They require intense looking at the screen in different ways to pick up the subtler meanings.

Religion and heritage are intertwined with love story. The parents clearly know what is going on with Elio and Oliver – they are letting their child grow his own path. In fact, they are such ideal parents as to be unbelievable, but they are made convincing by Michael Stuhlberg and Amira Casar, he friendly with a knowing gaze and she warm and maternal with a knowing gaze. Stuhlberg is in just about every movie being honored this award season and Cesar, better known in Europe, ought to be.

There is no sense of this Jewish family hiding its feelings or heritage, though the parents – an archeology professor and a translator who live like rustic royalty – do not display the star of David on chains around their necks. Oliver does and then so does Elio, since the religious connection, the sense of character relationships are almost more magnetic to them than the sexual attraction.

Guadagnino makes sure we recognize the story as pure by first having Elio test his feelings with a female friend. Heterosexuality does come across as somewhat lesser, so obsessively ardent is the longing between Elio and Oliver. But while some patrons will twitch at the pace, and some may twitch at the life lesson, others may welcome the chance to slow down and savor a portrait of human passage.