The Newspaper Publisher As Heroine

Spielberg’s 'The Post’ is timed to today, and Meryl Streep’s Katherine Graham sells it. 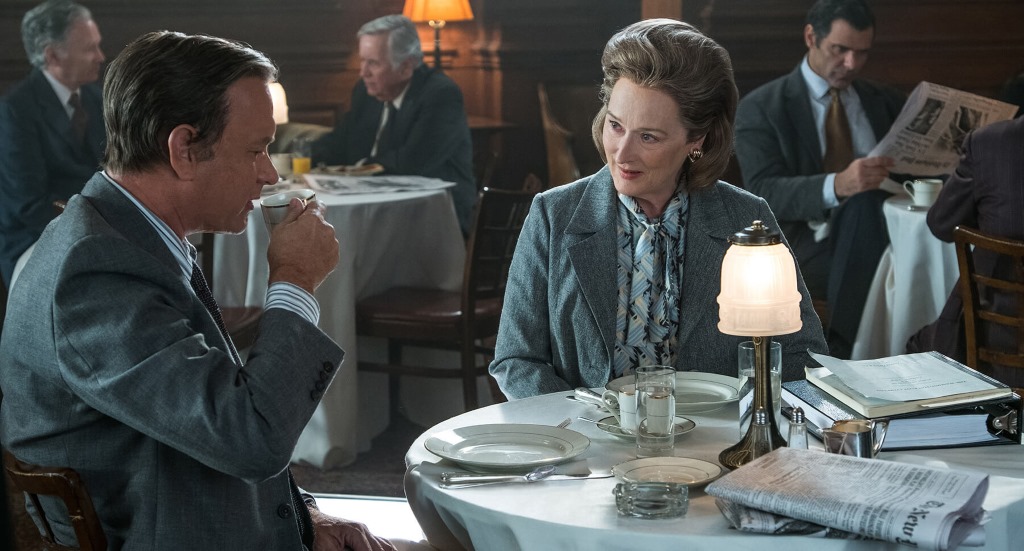 The most accomplished director right now – also the most influential producer — is Steven Spielberg whose latest interests have see-sawed between provocative portraits of the future and re-examination of the real heroes of the past (often unsung or erroneously sung such a Bridge of Spies, Lincoln, Munich, Saving Private Ryan, Schindler’s List).

It is the latter vein that has produced The Post and Spielberg’s skills shine in every moment while assembling a cast that could well qualify for the Screen Actors Guild best ensemble award. Given the rush the production was in to catch a timely wave, the speed combined with the quality are stirring.

Using panning shots, striking cross-views and sudden close-ups of intriguing characters, with John Williams’ music this time providing a jaunty concept of the newspaper world of 1971, Spielberg has fashioned a thriller though we know the ending – how the Washington Post stepped in when the New York Times was blocked by the Nixon administration and then won in the Supreme Court to continue publishing the Pentagon Papers (which demonstrated how a succession of presidents had lied to the public about the Vietnam conflict).

Try making a suspense tale out of that! Spielberg does, without a weak moment as the story unfolds, making publisher Katherine Graham the real hero and editor Ben Bradlee the true goad to heroism.

As someone who grew up at a newspaper with hot type, hard deadlines and the thrill that only a rumbling printing press can bring, I can testify to the validity of most of these images (except no linotype operator I ever knew would let a female publisher look over his shoulder like that) and further appreciate how Spielberg had chosen actors who look like and act like the times, particularly Bruce Greenwood as the conflicted Robert McNamara, who helped author the secret history and yet  fought its publication.

Unquestionably Spielberg has timed this film to our current political climate, reminding or warning America of a much neglected era before Watergate (which the film shrewdly ends with) when the press was the only blockade against executive overreach.

Out of real history, writers Liz Hannah and Josh Singer (with I am sure Spielberg breathing over their shoulders) have created a crisp stroll through the players and the key legal and logistical issues – concerns that exist today.  To elevate publisher Katherine Graham into a hero status does take a bit of doing that requires a Meryl Streep to portray her.

Graham in her memoir called herself an unlikely hero; the portraits of her surrounded by old white men who expected her to behave like a dutiful widow have strong visual accuracy.  And she did break out of her socialite image to go boldly where women of the period did not, though not quite as cleanly as The Post portrays. Streep has some effective moments portraying that internal clash of duties within her, a shrewdness of the actress to stay faithful to the times while we scream for women like her to break out of the shackles.

But to make that cinematic event a pioneering moment in the MeToo movement, Spielberg piles it on a bit, particularly a moment when Graham leaves the Supreme Court as a row of young women in the crowd glowingly admire her.

Streep and Spielberg neatly avoid any dramatic excesses in how Graham changes – no big speeches taking the chauvinists apart, just gentler expressions in keeping with her upbringing. But for the first time in a long time I could sense how hard Streep worked to find the truthful chords. That she accomplishes so much to make us feel the woman is a credit to her talents that Spielberg of all directors shouldn’t have so openly relied on.

Quite successful is the tireless Bradlee of Tom Hanks, with a special voice, a lopsided grin and a feverish absolutism that is believable and fresh.  This is a Hanks many won’t recognize, leading but fitting into a fine supporting ensemble with some powerfully good actors – Bradley Whitford as a business side nasty, Bob Odenkirk as the key journalist on a  key mission and Tracy Letts as a supportive then uncertain confidante.

Sarah Paulson is straight-on effective as Bradlee’s wife at the time, Tony, though in real life it was her indifference to journalism and his passion for it that led to a breakup. Perhaps that was too dangerous a side road to go down.

Spielberg has mined both the truth and fictionalized some encounters, as all good film biographies do. It’s a brilliantly paced and important film but not quite of the ranks of the other Spielbergs I have named.