Our photos take you inside the new library and apartment building on North Ave.

The new East Library is taking shape on E. North Ave in the heart of the East Side. Replacing a functionally obsolete, single-use building is a new first-floor library that will cost less to operate and provide better service. As part of the redevelopment, the city also gets new tax revenue from an apartment building being built above the library and a retail space on North Ave. HSI Properties is developing the property, known as The Standard at East Library, following a competitive bidding process that had many East Siders playing architect in public meetings.

We’ve followed the project for years now (this is my 12th article on the complex project), most recently with construction photos of the rising building. On Tuesday, Library Director Paula Kiely and Mayor Tom Barrett welcomed neighbors and members of the press inside for a tour of the under construction library. HSI’s Ryan Schultz guided guests through the apartment portion of the building, and during his speech from one of the apartments said he’d be remiss if he failed to ask if anyone wanted to lease a unit.

Local alderman Nik Kovac, who does double duty as a member of the board of the Milwaukee Public Library, reiterated his support for the project and vision for the neighborhood during his remarks. Kovac said “We want North Avenue to be in reality what Bayshore [Mall] is pretending to be.”

The apartments and exterior of the building have been designed by Engberg Anderson, with Mark Ernst serving as Partner-in-Charge and Tim Wolosz as the project designer. The actual library portion of the project is being designed by HGA. During the tour HGA architect Kevin Allebach (who is working with designer Jane Dedering) walked everyone on the tour through the various materials that are being reused from the past library building, including stained glass windows and old boards to be reused in the new high ceilings.

Construction of the five-story building began in July 2013. When finished the building will include 99 apartments and 6,000 square-feet of retail space. The new library will have 16,000 square-feet of space. Artist Ray Chi was selected to design public art that surrounds the library.

Occupancy for at least some of the apartments is expected before the end of summer, with the library itself opening this winter.

Enjoy the photos without the hassle of wearing a hardhat. 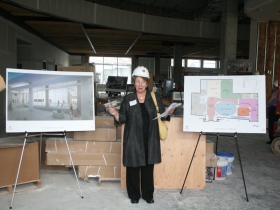 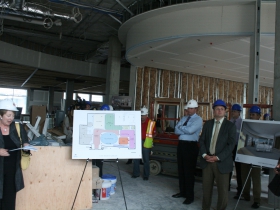 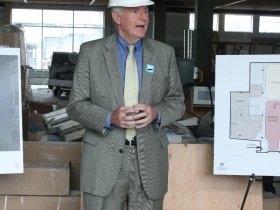 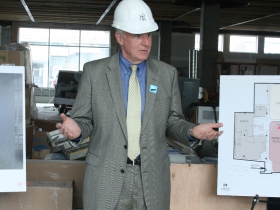 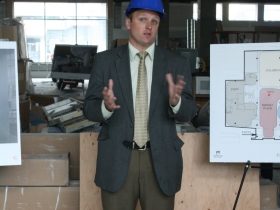 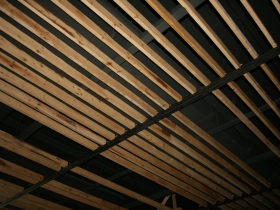