A new, state of the art library, 99 apartments and new retail space will be the result.

Milwaukeeans who miss the East Library don’t have much longer to wait. Nor do those looking for new apartments on the increasingly vibrant East Side. The Standard at East Library, the mixed-use development that will replace the obsolete one-story East Library on E. North Ave., is now accepting lease applications for “summer 2014” occupancy.

The land from the former East Library was awarded to HSI Properties (and partner WiRED Properties) in a competitive request-for-proposals (RFP) process in late 2011. A groundbreaking for the project was held on July 30th, 2013.  HSI’s new building will include 99 apartments and a 6,000 square-foot retail space in addition to a 16,000 square-foot space for the library. Designed by Mark Ernst of Engberg Anderson, the building will feature approximately 113 underground parking stalls for residents and 40 street-level stalls for library employees and patrons.

With the exception of the library portion of the project, the new project will be completely taxable. The result a prime parcel of land back on the tax rolls, while also creating a significantly more energetic and operationally efficient library.

As can be seen from the photos, the building has topped out and is entirely framed. Workers are loading materials through the windows and balcony doors to finish the interior (something countless college students moving this weekend would love to use to move their stuff). Other workers can be seen installing panels to finish the facade.

The development has had a notable affect on vacancy rates in the neighborhood. As part of the development, HSI had to provide a temporary library location. Instead of an unsightly trailer, the developers leased space at 2430 N. Murray Ave. In addition, the developers have recently opened an apartment leasing office in the former East Side Framing Gallery at 2021 E. Ivanhoe Pl. (the gallery has relocated to 2414 N. Farwell Ave.)

The interior of the library is being designed by HGA Architects. Ray Chi, a local multimedia artist, is creating public art to make the library an exciting space.

For a look back at our extensive coverage of this project, see our building page. 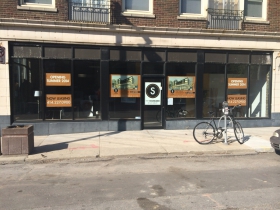 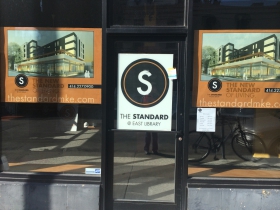 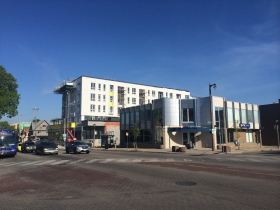 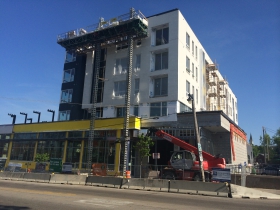 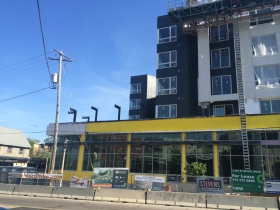 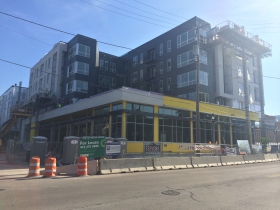