It's just a block and a half away from the old library, and as Mayor Barrett demonstrated at its opening, you can still check out books.

The process of converting the East Library into an apartment building with a first-floor library required the developers to provide a temporary library space. HSI Properties elected to make use of the space adjacent to Stone Fox Salon and Murray Pantry in a suburban-style strip mall building located at the southeast corner of N. Murray Ave. and E. Greenwich Ave. The temporary library is located .2 miles from the former East Library, about a block and a half from the back door of the former library.

Library manager Rachel Collins indicated that the library was able to bring over approximately 19,000 of their 52,000 item collection to the temporary library space (the soon-to-be-demolished East Library offered 15,000+ sq-ft. of space). Certain items, like audio books and CDs had to be temporarily reassigned to the Central Library, but are still available for checkout. Collins also noted that a system-leading 35% of checkouts are placed using the library’s hold system. This system allows patrons to request materials from anywhere in the system and have them placed on hold at their local library. Patrons are notified when the items are available for checkout, saving time on browsing and cross-town trips to find books.

Replacing the desktop computers at the East Library, the temporary library features a laptop self-checkout kiosk for patrons to use while at the facility. Mayor Barrett effortlessly demonstrated checking out a laptop using the new system.

If you’re missing the chairs at the former library or just in the market for a Herman Miller Eames chair, they’re being auctioned off by Leslie Hindman on July 25th and November 7th.

For those with inquiring literary minds, Mayor Barrett checked out two books on bicycle repair and Alderman Kovac checked out A History of the World in 100 Objects. No word was given if they would be giving oral reports at the next Milwaukee Public Library Board of Trustees meeting, of which Kovac is a member while the Mayor appoints nearly all of its members.

The new East Library, to be located on the first-floor of the 5-story, 99-apartment-units development, The Standard at East Library, is slated to open in the fall of 2014. For more on the redevelopment process including photos of the old facility, see our past coverage. 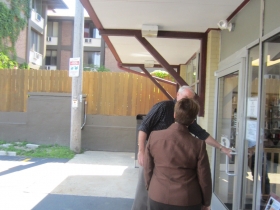 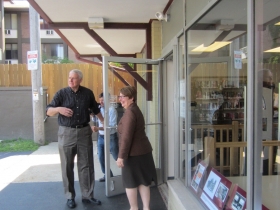 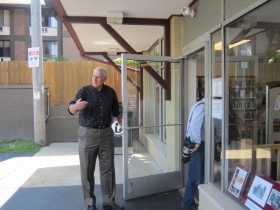 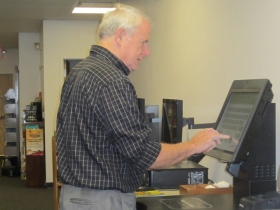 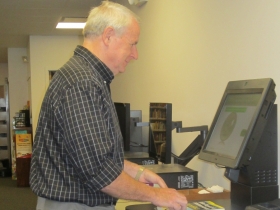 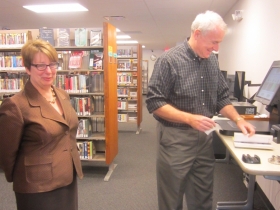