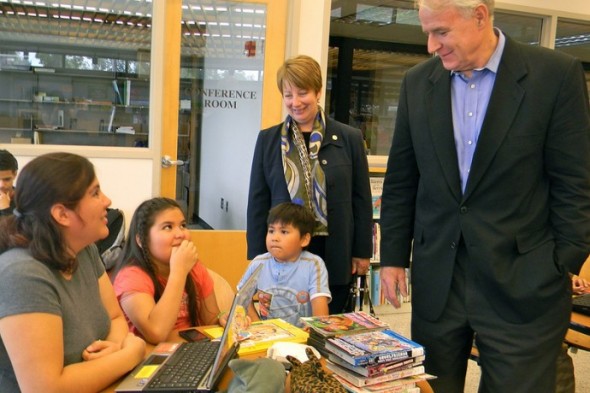 Patrons and employees at Forest Home Library are eager to learn how the proposal to rebuild the branch would affect them.

The plan to replace the branch, at 1432 W. Forest Home Ave., is part of Mayor Tom Barrett’s 2014 budget, which awaits Common Council approval.

The high cost of heating, cooling and maintaining the building, which was constructed in 1966, prompted the decision to rebuild. “It’s gotten to the point where we decided that it was more cost-effective to invest in a new building rather than to renovate an old building,” said Milwaukee Public Library Director Paula Kiely.

According to library spokesperson Brooke VandeBerg, a mixed-use building would be developed through a partnership with a private developer. 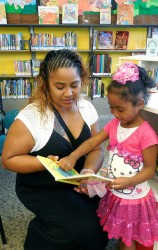 Guadalupe Bedolla and her 4-year-old daughter, Rihanna, visit the Forest Home library every other weekend to check out children’s books. (Photo by Maria Corpus)

Plans call for the new Forest Home Library building to be modeled after the Villard Square Branch, 5190 N. 35th St., and the Standard @ East Library, expected to open in December 2014. Villard Square, which was rebuilt in 2011, has 47 apartments above the library for grandparents who are raising their grandchildren. The Standard @ East Library building, 1910 E. North Ave., will include a new 16,000-square-foot library, 99 market-rate apartments and retail space.

The library expects to seek proposals for redeveloping Forest Home next year, according to VandeBerg.

Patrons hope the library will remain at the same location, or nearby.

Since her recent move from Madison, Cheryl Tremain has become a frequent visitor at the library branch, which is only a block and a half from her home. “If it moves, I won’t be able to go,” Tremain said.

Guadalupe Bedolla grew up visiting Forest Home. Now she visits the library every other weekend with her 4-year-old daughter, Rihanna. “I don’t have a car so it’s much easier to have the library here because it’s in walking distance,” Bedolla said.

Bedolla also is concerned about the plan for mixed-use development, fearing she won’t feel safe “because we aren’t going to know who lives upstairs and what kind of people they are.”

Azucena Galeno also would like the library to remain in the same neighborhood. Galeno, who visits four times a week, thinks a new library would increase the collection of books and services.

Jennifer Hron, children’s librarian at Forest Home, never thought redevelopment would be possible because of funding issues. Now she sees an opportunity.

“We definitely have a lot of people coming in and out of the door. [The library] does get used a lot. I think it’s nice that we can hopefully offer more things for the patrons. …I think a new building could definitely help with that,” Hron said.

Hron added that a mixed-use development would benefit the library. “[Patrons will] come down for programs and they’ll come down to use the library because it is so convenient for them,” she added.

Like library patrons, Hron hopes that the library remains in the Forest Home neighborhood and that input from community members and library employees is taken into account “to come up with the best model.”

In addition to its collection of books and other materials, Forest Home Library provides tutoring, computer classes in Spanish and English and a variety of other programs. In 2012, the library served 159,000 visitors, according to Library Manager Dave Sikora.

2 thoughts on “Rebuilding Another Library”