Mark Ernst, AIA, LEED AP, Architect, Partner at Engberg Anderson, gave an overview of the development and the updates to the design. 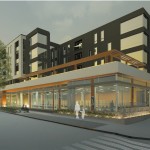 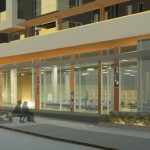 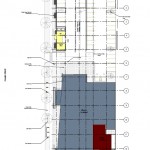 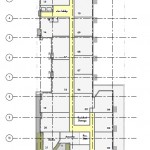 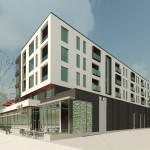 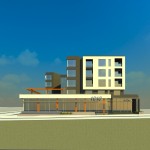 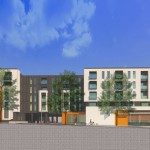 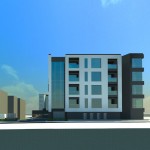 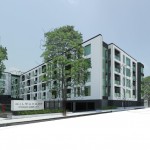 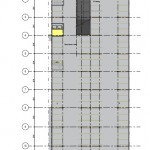 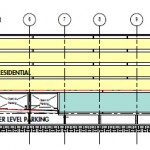 Available from the project page on the City of Milwaukee website.

“Revised plans modified the original site layout to accommodate more public space in the center of the building. This change allows access to both public and private parking from two points, while reducing the number of curb cuts from the earlier submission. The west façade was modified to move upper levels away from Thomas Avenue at varied setbacks. The east and south façades have been developed.

These plans were presented to the East Side Architectural Review Board on January 24, 2012 to ensure that the project would conform to the City’s new guidelines for the East North Avenue Business District. The East Side ARB approved the overall design and massing contingent of future review of building materials, lighting, landscaping and public street improvements. Building signage will be handled separately by the East Side ARB. “

Barring any set backs, the schedule for the redevelopment of the East Library will proceed as listed below. It’s unlikely any of the committees or commissions will hold the project up, but HUD approvals have proven to be a fairly slow process for two high profile developments currently under construction, The Moderne and 1910 on Water.

A number of questions were asked of the officials and development team in attendance. I have included summarized versions of many of the questions and answers below in an attempt to provide the most information about the project, but not to require one to read a word-by-word transcript of the meeting. The answers are not mine, but are paraphrased from the officials in the room.

The current library will be sold to the development team for $20,000. They will in turn construct the mixed-use building and return the white-box (empty) library space back to the city/library under a condominium ownership structure.

The new building will be taxable, with the exception of the library condominium. The project is estimated to cost up to $15 million, and a standard assessment will determine what the actual assessed value of the building is.

The response from both Blair Williams of the development team and Alderman Nik Kovac was no, that a land lease would not be a better deal. It was explained that this is the most cost effective way to get a new library. In turn for essentially getting the land for free, the developer is returning the city a new library shell for free. Blair Williams noted that, with the exception of possibly Park Lafayette, this deal is likely the most paid for land in the City of Milwaukee (the price taking the form of the cost to build the library shell).

It was noted that the city could have likely received more money by flat out selling the land, but then they would have one less library. Paula Kiely mentioned that the city will still have to spend around $3 million to build-out the library space, but that is less than the cost of the last stand-alone library built in 2003 at $4.3 million. It was mentioned that the stand-alone libraries also do not generate any tax revenue, the revenue from which will offset the cost of the new library’s build-out.

Blair Williams fielded this question detailing that because of the smaller size of the guarantee compared to other HUD projects the project would have a shorter approval routing. Traditionally applications go first to the Milwaukee office, then the Minneapolis office, and finally to the head office in Washington, D.C. This project will only need to go as far as Minneapolis. He mentioned that in their preliminary discussions with HUD they have agreed it is a promising project. A preliminary application and a firm application are still both needed to get full approval.  The HUD loan guarantee will be used to develop the building with market-rate apartments.

Two things were mentioned. One, that the market is substantially different. Two, that the Villard Square Library (the original MPL mixed-use development) uses WHEDA tax credits instead of HUD financing, which results in the apartments being built to the requirements of the credits, in this case family-sized.

Alderman Kovac used this question as an opportunity to lament the fact that WHEDA credits are given out based on census tract, and that that policy makes the east end of North Avenue unlikely to receive the credits. He indicated that this is not a good way to help facilitate economically integrated neighborhoods, and that he has made his views clear to WHEDA.

Would a 30-story building, like The Moderne, have generated more money?

It was indicated that yes it probably would have, but that the neighborhood might not have allowed it and developers might not have wanted to build it. Kovac indicated that the current zoning calls for a minimum of 18 feet, and a maximum height of 60 feet. He said he hopes to have that minimum boosted to 30 feet, and has introduced a file to do so. He noted that he believes the towers belong downtown, and that smaller scaled five and six story development’s better makeup the urban character of Milwaukee’s urban neighborhoods, much as similarly scaled buildings do in Paris.

Blair Williams was open in admitting that the green roof on the project is not truly there as an environmental solution. It is more a reality of the design. He stated that the relationship between the library and the development would be spelled out in their agreement, and things such as the water accumulating on the roof would be detailed.

Reuse of materials? Salvage from destruction of building?

It was noted that the stained glass in the current building will be saved to be integrated into the facade of the new building. Other materials would be saved as commodities, but because of the age of many of the fixtures they may not be reused in their current configuration. Bids from demolition teams will indicate how much will be saved. Alderman Kovac drew audience laughter noting that the books would be saved.

One thought on “East Library Redevelopment Update and Estimated Schedule”