The East Library along North Avenue, with the parking lot immediately north of the building.

Wednesday night, Alderman Nik Kovac held a public meeting to allow feedback to be voiced regarding the three proposed alternatives for the redevelopment of the one-story East Library into a mixed-use facility. The meeting was a follow-up to a meeting last November discussing the potential of issuing a request-for-proposal (RFP) for the redevelopment of the East Library site. Attendees at the meeting were provided with an update on the process and allowed to ask questions about the process and proposals. In attendance were officials from the Milwaukee Public Libary, the City of Milwaukee Library board, the Department of City Development, and the Redevelopment Authority. Four public officials were in attendance listening and answering questions, Alderman Ashanti Hamilton (Library Board president), Alderman Nik Kovac (Library Board member), Alderwoman Milele Coggs (Library Board member), and Mayor Tom Barrett.

As a background on the process, the Library Board has proposed transforming the way library services are delivered by introducing three different types of libraries, mixed-use facilities, area libraries, and express libraries designed to expand facility hours and modernize operations. Following the November meeting, a RFP was issued for redevelopment of the East Library located on North Avenue. Gorman and Company, HSI Properties, and Stone House Development all responded to the RFP, offering designs that those answering questions agreed were all fairly similar. Before the questions began, the officials gave a brief overview of the process to-date, highlighting that the mixed-use Villard Avenue Library will open October 5th 15th and that the Library Board may make a decision on which, if any, of the proposals to invite back for individual review on September 27th. Alderman Kovac explained to the audience that for final approval the redevelopment plan would need approved by the Library Board, the full Common Council, the Mayor, and likely the East Side/North Avenue Architectural Review Board (assuming it is approved prior to this project).

A number of questions were asked of the officials in attendance. I have included summarized versions of many of the questions and answers below in an attempt to provide the most information about the project, but not to require one to read a word-by-word transcript of the meeting. The answers are not mine, but are paraphrased from the officials in the room.

Is the land being sold? Yes, for $20,000 as well as the provision that a white-box, first-floor condominium be provided for the East Library in return.

Who is the architect? The developer will have their own architect for the exterior of the building, as well as their privately-owned areas. The Milwaukee Public Library will contract with an architect to design their space.

Criteria for picking the best proposal? A number of things were mentioned including the size of the library condominium, parking, architectural design, compliance with design guidelines, prominence of library, articulated facades, green space, quality of materials, economic sustainability, and what the additional uses provide to the neighborhood.

Temporary library? The temporary library would need to be within walking distance and would likely be within a half-mile and not west of the Milwaukee River. Gorman was the only developer to propose a specific solution that involved a phased construction process with a temporary library on the north end of the lot similar to what is currently done in post-Katrina New Orleans.

Free parking? Yes, the same number if not more stalls. One proposal has surface parking, two have underground parking. All have at least 40 stalls. These stalls are in addition to any parking necessary for residents of the proposed apartments.

A comment was offered stating that the commenter was “not impressed” about the proposals. This drew applause from the audience. The commenter offered up that the designs looked too much like other new apartments in the area. This was repeated a few times.

The Urban Ecology Center is financing a new location through donations, could the library do the same? No, estimates have new single-story, 20,000 square-feet library costing $11.7 million to build. There are significant cost savings through building a mixed-use library, including the financial relief provided by the property taxes from the rest of the development. Alderman Nik Kovac noted that it has been shown that density on North Ave. is in demand.

In the only explicit endorsement of the night, one commenter stated they liked the HSI proposal the most, but merely because it was the one they disliked the least.

Historic Preservation Commissioner Sandra McSweeney asked about what happens if financing from WHEDA falls through for the selected developer (provided it was one of the two seeking low-income housing tax credits – Gorman, Stone House), noting that being awarded WHEDA financing is not always dependable (likely intended, in particular, as a reference to the failure of the Mercy Housing proposal to be awarded credits). Alderman Kovac remarked that similar to what happened at Garden Park, it would likely kill the project and require it to be restarted.

Is the condition of the library causing this? Not yet, but that at least one million dollars in maintenance would be required soon. Both Alderman Kovac and Mayor Barrett encouraged those in attendance to visit Villard Avenue Library.

Is a TIF available for the site? Alderman Kovac said that it was definitively not.

One commenter noted that Milwaukee has many distinct neighborhoods, and that the mixed-use Villard Avenue Library appears great for that neighborhood, but in regards to the proposals the commenter stated “that’s the best they can do?”

Only one question was about height (compared to 5 at the first meeting). Alderman Kovac noted that all of the proposals were below the zoning height limit of 60 feet.

Blair Williams, part of the HSI Properties proposal and the only developer publicly in the room, noted that as it is in Milwaukee, density is driven by parking and the site is only so large (and underground parking is prohibitively expense below one floor). Answering to Alderman Hamilton’s question of him on design, Williams discussed that land costs are actually $1.5 million when the costs of the library condominium are considered. To those asking for an iconic building (a term that came up over and over), the cost of the building can’t exceed the revenue it generates. He noted that various forms of tax credits could help, similar to what was achieved when he developed The Cornerstone in Shorewood. Williams also noted the struggles from the timeline of the RFP, which resulted in a rendering that only reflects the massing and layout of the building, and not the end design.

It will be interesting to see what the outcome is given the feedback offered tonight. The pulse of the room didn’t seem warm to the designs, but it also didn’t appear overall hostile to the idea. Would those in attendance be happy with any design short of the quality of City Hall or the Central Library (two buildings that Alderman Kovac noted no RFP could cause to be built today in Milwaukee)? Is using the design as the central point of disagreement merely a way of attempting to reject the project as a whole? The panel of five (Alderwoman Coggs, Vanessa Koster of DCD, Jim Plaisted of the East Side BID, Library Director Paula Kiely, area resident and Legacy Redevelopment Corporation founder Sally Peltz, and UWM SARUP Dean Robert Greenstreet, Ph.D) that is tasked with selecting which proposals to move forward has their work cut out for them.

If all three of the proposals are ultimately rejected and another RFP is issued, it would be interesting to see if the design quality improves with a longer window to respond and a reduction in the parking requirements for the library portion of the project from 40 stalls to 20.

Which proposal do you like? Vote in our latest poll in the sidebar. In addition there is an official form to offer your feedback in. 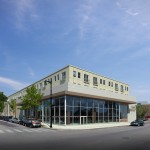 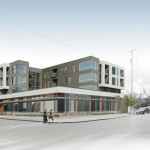 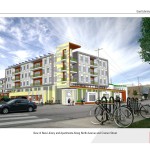