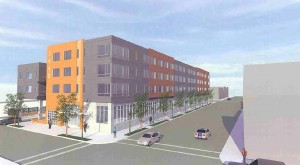 Gorman & Company has been working with the Northwest Side Community Development Corporation to construct a mixed-use development on the 3400 block of W. Villard Ave.  The four-story, 47-unit building will also include 12,000 square feet of space to house the Villard Avenue Library.  The file before the City Plan Commission on Monday was an amendment to a previously approved Detailed Planned Development which specified the zoning and design of the proposed building.  The housing component of the building focuses on housing for grandparents who are primary or secondary care givers.  The building’s exterior will primarily be a masonry material, and will use a cement board system.  The third floor will house a children’s play area, and community room.

Paula Kiley, the Director of the Milwaukee Public Library, explained that the new facility will be somewhat smaller than the existing library but that the existing library is just one of seven City of Milwaukee libraries that are in the need a new HVAC system, and would need $750,000 to continue operating.  She went on to add that by using more technology and having one point of service the new library will offer better service despite the smaller facility.  There was some discussion regarding using this mixed-use model for other libraries in the city and she responded indicated that this concept is being looked into and that the “East library is the one that’s got the most consideration.”

Alderman Hamilton spoke in strong support of the project saying that “a lot of business that is generated over their is anchored by the library,” and that “this has been the catalytic project for that area.”  Former Saint Louis Ram, and University of Wisconsin football player Charles Belin spoke with great passion regarding the project saying that this is an “excellent, excellent thing you guys are doing here,” he went on to explain by telling his football story, that “sometimes you’re on the edge of some great thing happening,” and therefore this project should be supported.  This project had previously been approved, but hadn’t moved forward due to a lack of funding.  It has now received $7.8 million in WHEDA tax credits which should allow it to move forward soon.

This revision to the proposal was easily approved, and will now go before the Zoning, Neighborhoods & Development Committee.