Residents are still a little restive about it, but the East Side's buildings are likely to get a little higher, to judge by the results of today's City Plan Commission meeting.

Example of the minimums allowed by LB2 compared to LB3

Residents are still a little restive about it, but the East Side’s buildings are likely to get a little higher, to judge by the results of today’s City Plan Commission meeting.

The Commission approved up-zoning (higher height limits) for the project to replace the East Library, while a broader proposal for a similar up-zoning along the rest of along E. North Ave was held. This approval keeps The Standard at East Library on track for a spring 2014 opening. Meanwhile it remains to be seen if up-zoning for all of E. North Avenue  can be completed before a rumored development for the former Prospect Mall comes forward. Besides raising minimum and maximum heights, the zoning changes also permit greater density, while requiring designs more conducive to walkable neighborhoods.

Two years in the making, the proposed up-zoning is part of the continuing evolution of E. North Ave from the river to Prospect Ave, and springs from the same effort that created the East Side Architectural Review Board. The two zoning changes were introduced as separate items because of the time sensitive nature of the library redevelopment, despite the fact that it is located on North Avenue. 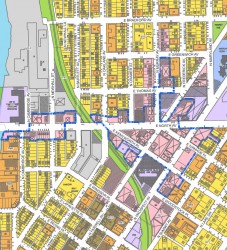 Department of City Development (DCD) planner Greg Patin explained the rational behind the changes, noting the city had previously reformed its zoning codes, but had not created enough options for districts. The Department believes that some recent developments have not fit in as well as they could have, and that these code changes would rectify the situation. Patin noted that recent developments in the area, such as UWM’s residence halls and Columbia St. Mary’s Hospital, are excluded from the boundaries of the proposed change from LB2 to LB3 as they already have special zoning accommodations beyond what LB2 allows.

He noted that the LB3 zoning district is a completely new zoning classification created by the city that allows for greater minimum and maximum heights as well as increased density. It was designed to create additional options for zoning districts, and to reduce the number of planned developments (projects which require special zoning exemptions on a site-by-site basis). This new zoning designation also requires a greater street frontage and taller ground level windows. For those thirsty for more details, DCD has produced a presentation in PDF format that further explains the new LB3 designation.

Jim Plaisted, Executive Director of the East Side Business Improvement District, spoke in favor of the changes, but two neighbors were opposed.

Cindy Kluge, speaking on behalf of the Greenwich Village Neighborhood Assocation, asked for the matter to be postponed until the area’s neighborhood associations have more time to review the proposal. Her association is in favor of zoning change around North Avenue, but would like the heights to taper off as they get away from North Ave.

Alderman Nik Kovac spoke at length on the proposed changes. He noted it has been a two year process to get this point, and that this isn’t something that has “dropped out of left field.” He stated that the entire portion of the proposal south of Thomas Ave is non-controversial, and that city officials had worked with neighborhood groups on these changes. As an example, Kovac noted that everything on the west side of Murray Ave, north of Thomas Ave, is to be left as LB2. He also stated that he felt that for Murray Ave 75 feet is probably too high, but also that 18 feet (the existing minimum) is too low. He noted that there is some urgency to moving this forward as a Prospect Mall proposal is in the works.

There was some discussion of a compromise to remove the up-zoning north of Thomas Ave, which Kluge said she generally supported, but added that her other concern is “public process,” that the neighborhood association needed more time to review the proposed changes.

Ultimately, the up-zoning was held until the next meeting of the commission on a 3 to 2 vote. 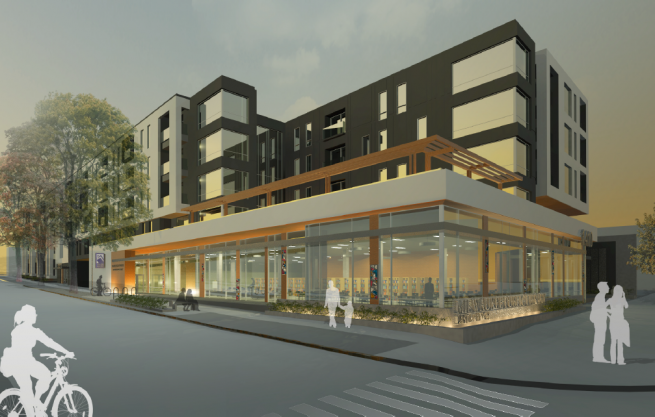 The East Libary zoning change, from LB2 to the new LB3, was brought before the Plan Commission today in order to allow the East Library RFP winners, HSI Properties and WiRED Properties, to move forward with their plan to gain U.S. Department of Housing and Urban Development (HUD) financing approval.

Unlike the broader North Ave up-zoning, no one spoke against the changes for the East Library site. Alderman Kovac explained that although there isn’t universal support for the design plans for the new mixed-use library, there is a lot of support, and this zoning change is needed to move the project forward.

The City Plan Commission unanimously recommended for approval the change from LB2 to LB3 for the East Library site.

The East Libary will be the first property in the site to be zoned LB3 if confirmed by the Common Council.

For past coverage of the redevelopment of the East Library, see our East Library category page.