A Redesign for Hi Hat Garage

This week Leslie Montemurro and Scott Johnson were before the Historic Preservation Commission seeking a Certificate of Appropriateness to allow a new addition to the Hi Hat Garage, the bar they own at 1713 N. Arlington Place.  The property sits within the East Brady Street Historic District which means the owners are required to obtain a COA from the commission prior to construction of the addition.

A surface lot on N. Arlington Place was recently was converted into a patio for the tavern, but it will once again be re-invented as indoor / outdoor space that will allow Hi Hat Garage customers to seamlessly move between the patio and the tavern.  The new structure will be cantilevered over the existing building which visually continues the architectural rhythm along the street.  It will be constructed of wood thatching over glass and have multiple garage door openings to allow the building to work as an edgeless outdoor room.

Why the change?  “Places need to be re-invented,” Montemurro explained.

The request was unanimously approved by the commission. – Dave Reid 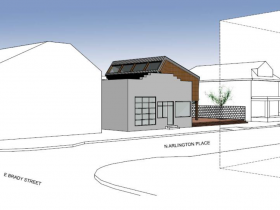 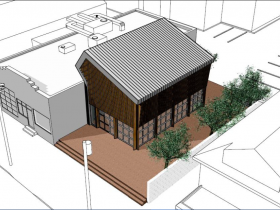 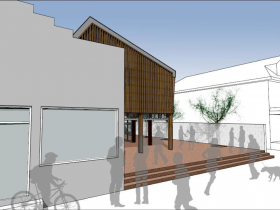 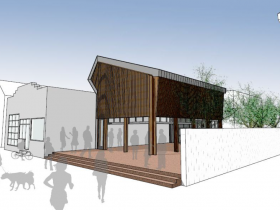 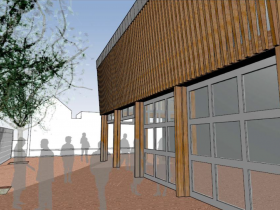 At Monday’s meeting of the Community and Economic Development Committee, the proposed Two Parks Neighborhood Improvement District (NID) was again held, in part due to Mayor Tom Barrett’s request for more information from the county.

The proposal would create a new taxing district, bordered by Ogden St., Michigan St., the Milwaukee River and the lakefront, to fund $4 million in improvements to Cathedral Square and Juneau Park.  The funds would also cover ongoing maintenance of the parks. The $4 million would be raised by a creating a new tax of 25 cents per $1,000 of assessed value on properties within the area.

Ald. Bob Bauman, who represents most of the proposed district, continued his opposition to the proposal stating, “I believe the basic architecture here is fundamentally flawed.”  Bauman explained that “Juneau Park is a very different entity [from Cathedral Square],” and that Juneau Park Friends could negotiate with the county and raise funds for the improvements. By contrast, Cathedral Square is a park that draws customers to the entertainment district making the local Business Improvement District a more appropriate entity to drive the park efforts, he argued. “There should be at minimum two different entities,” Bauman contended, and urged “everyone to go back to the drawing board.”

Reiterating the mayor’s position, Martha Brown, Department of City Development Deputy Commissioner, requested the file to be held until details on the management of the parks could be determined and to allow Milwaukee County time to weigh in on the concept.

Ald. Joe Davis, who supports the NID, offered a succinct response to her message: “Very unhelpful.”

Opponents of the proposal included notables Don Smiley, Summerfest Chief Executive Officer, and John Crichton, owner of Shoreline Co. Smiley got right to the point stating, “there’s nothing about this proposed neighborhood improvement district that I can agree with.” Crichton said he was representing five large landlords in the area, whose combined ownership included $130 million in tax base and over 2,000 apartments within the proposed NID, and are opposed to the proposed tax.

A Downtown resident referenced a Juneau Village Towers resident named “Shirley,” and explained how people like her who are on fixed incomes are getting squeezed out of living Downtown.  He added “the Crichtons will have to raise taxes on 2,000 people.” Ald. Davis took exception to the term “taxes,” but it was clear the resident meant rents would be pushed up due to this new tax.

Representing the group proposing the NID, Gary Grunau responded to the criticisms. First, he explained that if approved “there would be no assessment in the first year whatsoever,” and that the group would raise money from foundations and donate time to pay for the first year of operations.   Responding to the potential increase in rents, Grunau explained that “the lady at Juneau Village” will pay no more than $16 dollars a year due to this tax. He went on to insist that experts are telling him that fundraising for for parks isn’t feasible right now. Making his closing argument for the NID, Grunau made one more pitch that despite the cost, “it’s going to improve the living for all people who live, work, and play in the downtown area.”

The committee voted four to one to hold the proposal for a second time, with Ald. Davis, committee chair, as the lone vote in opposition to the delay.   It is likely this proposal will be in front of the committee again at the January 7th, 2013 meeting. – Dave Reid

The proposal to convert the functionally obsolete East Library into a property-tax-paying mixed-use development continues to move along. While much has been made of the selection of HSI Properties & WiRED Development to build The Standard at East Library, little has been discussed about the new library facility itself, until now. Occupying 16,000 square-feet on the first-floor, the new library facility (the interior space) is being designed by architecture firm Hammel, Green, and Abrahamson (HGA). HGA formerly designed the Washington Park Library.

A public meeting was held Tuesday night at the East Library with HGA architects, library staff, and members of the Milwaukee Public Library Board of Trustees, soliciting input from those in attendance on what they like about existing libraries and what they want to see in the interior of the new library.

Mayor Tom Barrett made a brief appearance at the start of the meeting to speak about the project. He drew laughs with a quip about the design selection process, noting that he “didn’t realize everyone on the East Side was an architect.” He also noted that the city budget has faced challenges, and will continue to, but that he is committed to finding ways to fund the library system as it is a core part of the community. Also speaking on the importance of the process and the influence the process had on the new Villard Square Library were Library Director Paula Kiely, Trustees Ashanti Hamilton and John Gurda, and local alderman Nik Kovac.

Kovac drew laughs while describing the process being about the interior not the exterior, noting that he wasn’t sure how information would be stored in the future (but that it likely wouldn’t be on scrolls) and that he had run into a number of retired librarians at the Hilton Garden Inn grand opening just prior to the meeting who were confused about what exactly is being designed.

A follow-up meeting is planned for the spring. The new building, which had originally been proposed for a Spring 2014 opening, is slated to open in the fall of 2014.

The questionnaire is available online, and may be turned into the East Libary through December 21st. – Jeramey Jannene

Fire and Police Commission Too Hot for TV?

As a long time advocate for increased transparency, the controversy regarding the re-hiring and then re-firing of Milwaukee Police Department Officer Richard Schoen made this writer wonder why I’d never seen a Fire and Police Commission (F&PC) hearing?  As a long time viewer of City Channel 25 I’d never noticed this commission being on the schedule.  Apparently I’m not the only one.  Even before this recent controversy, Alds. Milele Coggs, Willie Wade, Ashanti Hamilton and Jose Perez had noticed this and sponsored an action to change the priority list for the city channel.  In an email to Urban Milwaukee, City Clerk Jim Owczarski explained “By this action, the CC [Common Council] established the F&PC as one of the highest priorities for placement on the TV25 broadcast schedule.”  Great. I’ll be watching. – Dave Reid

2 thoughts on “Eyes on Milwaukee: A Redesign for Hi Hat Garage”