Plus: Four new bars and restaurants coming by spring of 2023. 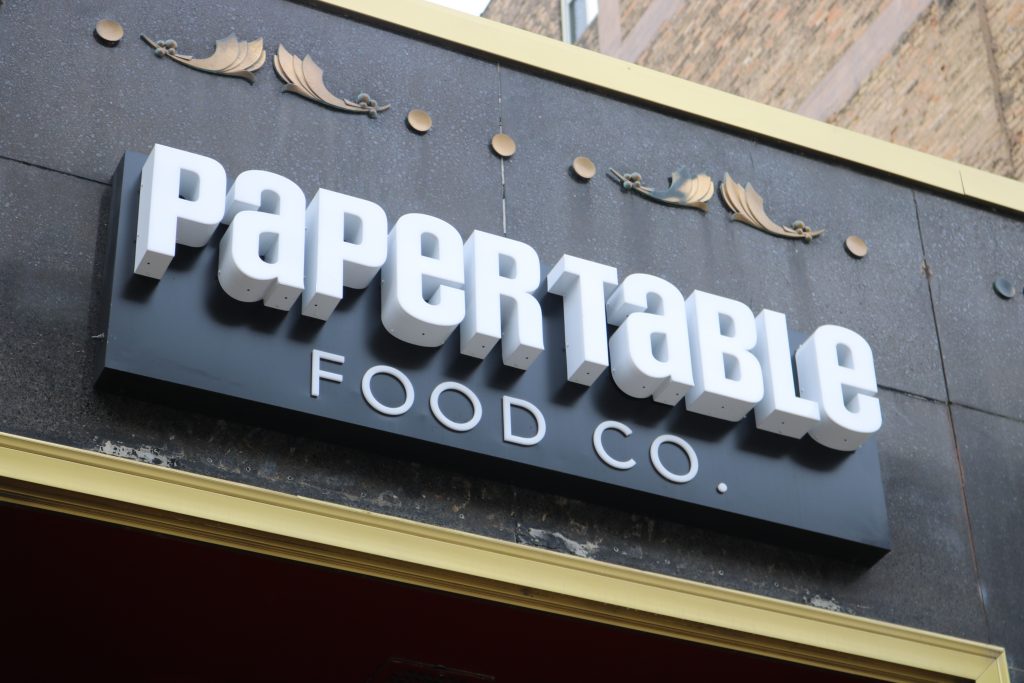 Paper Table, the delivery-focused downtown food hall, continues to diversify its offerings with the addition of Crooks Chicken & Waffles.

The food hall’s newest vendor is now open for business, serving unique twists on the brunch specialty. Alongside the classic chicken-topped waffle, the menu offers a chicken, egg and cheese potato waffle sandwich and a chicken-stuffed waffle topped with a fried egg.

Make any waffle chocolate chip for a $1 upcharge.

The new bar, restaurant and event space will be operated by Talesha Campbell, who recently purchased the building that houses both Candela’s and a three-bedroom upstairs apartment for $355,000.

The building, 2537 W. National Ave., was originally listed for sale in early September for $380,000 via Compass RE WI-Northshore.

Maple Trees Bar & Grill would operate as a tavern and banquet hall, according to a license application. The business also noted plans to offer food for dine-in and delivery.

The owners of a local Vietnamese food truck are preparing to launch their first brick-and-mortar location at 3rd Street Market Hall.

Husband-and-wife team Shimleng Lo and Mauly Her Lo will operate the restaurant. Throughout the past several years, the couple has gained industry experience working both front and back of house. They also launched their own food truck and ghost kitchen, Oxtail Noodle House, earlier this year.

Despite its popularity, the mobile operation was forced to close just months after its opening due to a fire at Common Cookhouse, the site of the food truck’s base commercial kitchen.

On the cusp of the new year, many are looking ahead. But not Samuel Ross. Instead, the prospective business owner is looking back — all the way back to the 1970s, ’80s and ’90s.

Ross, aka DJ Sammy Jammy, recently filed a license application for S-N-I Live, a music-forward bar and event space that would feature throwback hits from the likes of Michael Jackson, Prince, Nirvana and many more.

The new business is planned for 2221 N. Humboldt Ave., in Riverwest. Categorized on a license application as a nightclub, banquet hall, tavern and cocktail lounge, the multifaceted space contains four separate rooms and an outdoor patio for smoking. The tavern would have a capacity of 80 patrons.

Forget a fairytale ending, Discourse Coffee only has eyes for beginnings. The experimental cafe recently announced plans to close its Crossroads Collective coffee bar at the end of December to make way for a brand new concept in the new year.

The Counter Day Bar, a non-alcoholic cocktail bar, is expected to open in February. The theme of the debut menu is myths and fables.

Founded with an emphasis on seasonality, flux and constant reinvention, it comes as no surprise that Discourse is planning a complete transformation of its vendor stall just one year after opening at the east-side food hall, 2238 N. Farwell Ave.

Behind the business is owner Ryan Castelaz and partners Sean Liu and Olivia Molter. Since establishing their presence in the Milwaukee coffee scene in 2021, the Discourse team has grown to include 13 members in addition to the owners.

The majority of gift-giving may have concluded for the season, but there’s still more to unwrap at the newly-opened Hen’s Deli, a counter-service, breakfast-and-lunch place in Walker’s Point.

The restaurant officially opened on Dec. 22, bringing its made-from-scratch bagels, meat-filled tortas and other handhelds to the neighborhood. To the delight of co-owners Vivian Sotolongo and Lucas McDonald, the opening attracted a steady stream of hungry customers — some neighborhood residents, others traveling from across the city — who braved the frigid, 30-below temperatures for a first taste of the deli’s offerings.

The cozy eatery occupies a 501-square-foot space at 209 W. Florida St., inside the former Soup Bros cafe. The updated interior features black-and-white tile flooring, a bakery display case and sage green walls accented with cheerful red trim. The deli’s size warrants a takeout-focused business model, though there is a single four-top table tucked into a corner nook for dine-in.

The fresh bagels are a prominent player on the deli’s menu. Order one toasted with regular or vegan cream cheese, or enjoy in sandwich form topped with bacon or sausage, egg and cheese. Other options include a pork pastrami bagel piled with swiss, “horsey mayo” and pickled onion, or the bagel Levantine, featuring baba ganoush, labneh, tabbouleh and pickled onion.

Milwaukee’s Department of Public Works‘ Forestry Services Division and Black Husky Brewing have once again joined forces to get the most out of the city’s Christmas tree. In true “Brew City” spirit, the partnership combines beer and boughs to create a refreshingly tart beverage.

Boughs from the 31-foot-tall Colorado Blue Spruce were trimmed during the tree’s harvesting for use in the Riverwest brewery’s 2022 City Sproose, a double India pale ale. A portion of the proceeds from those suds will also support the forestry fund. In 2021 that arrangement yielded approximately $1,200. The partnership is now in its third year.

“This is more than just brewing a beer; it is an opportunity to enhance the community through the Urban Forestry Fund and also display creative uses of the city’s resources in a sustainable manner,” said Tim Eichinger, owner at Black Husky, in a statement. “The bonus has been the story that each of the tree donors has.”

This year’s tree was donated by Erwin Boehme, a 93-year-old U.S. Army veteran of the Korean War and a retired Milwaukee firefighter. The forestry division removed the tree from the yard of Boehme’s Washington Heights home in early November.

No Sale After All, Koz’s Will Continue Under Current Owner

Earlier this year, Koz’s Mini Bowl was listed for sale, casting uncertainty on the future of the long-standing southside establishment. But fans of the tavern can rest easy, because the business won’t be changing hands after all. At least not yet.

Owner Justin Kosakoski opted to remove the listing after a few months, noting that he wasn’t quite satisfied with any of the offers. The business and property were listed at $499,000 and marketed as a turnkey operation with a stable customer base. The second-generation owner said he plans to continue running the business for up to another decade.

[inartilead]First opened in 1978, Koz’s, 2078 S. 7th St., has become a neighborhood fixture in its corner location overlooking Kosciuszko Park. The tavern’s crown jewel is its duckpin bowling, a miniature version of the ten-pin game. Bowlers can wear regular shoes and use a softball-sized, three-pound ball to disrupt a fleet of 10-inch, wooden pins. With no mechanical setup in place, Koz’s became known in its early days for employing neighborhood kids to reset the pins after each frame, a tradition that Kosakoski continues today.

Koz’s four, 17-foot lanes were installed in 1947, making it the longest continually running mini-bowling spot in the state. It’s also the only one in Milwaukee. The dive bar also offers billiards, darts and a vintage jukebox. The wood-paneled walls are hung with dozens of old-school beer signs and prints, though they may look a little sparse these days, following Koz’s August antique sale, which saw the bar unloading many of its eclectic decorations including tap handles, bar signs, glassware and more during the week-long event.