Plus: Two new restaurants and a festival-packed weekend. 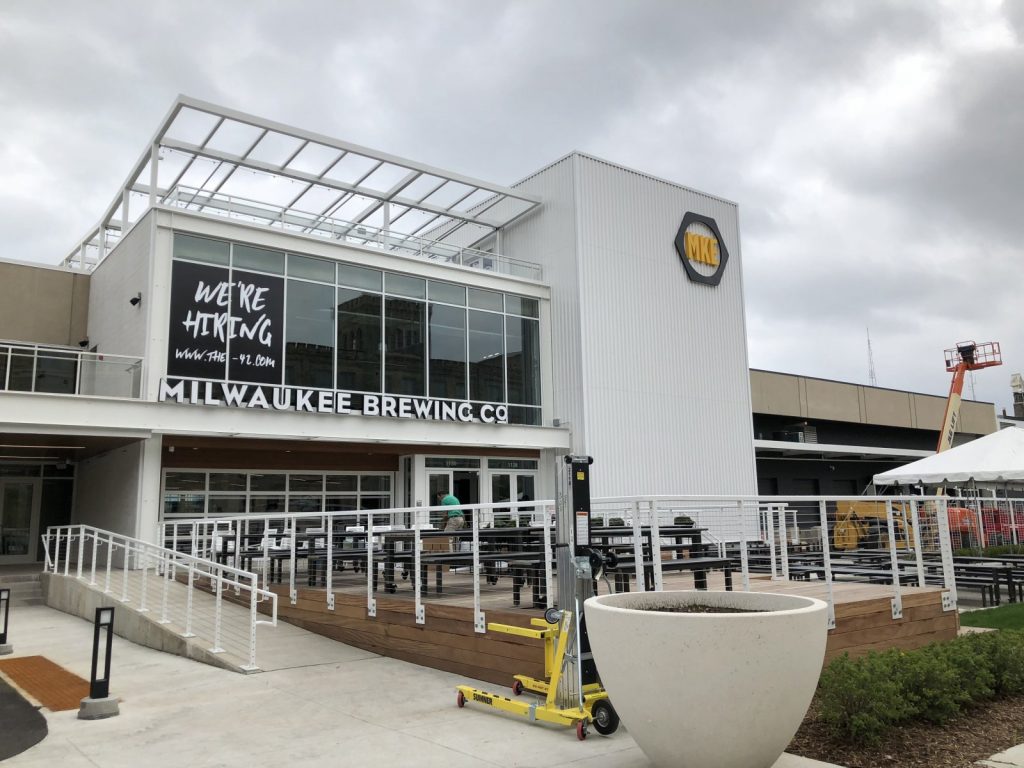 Pilot Project co-founders Dan Abel and Jordan Radke and head brewer Glenn Allen used funds from an $8 million seed round to purchase the approximately 60,000-square-foot commercial brewing facility. Chicago-based investment group InvestBev led the seed round of fundraising, following a 2019 friends and family fundraise of $500,000, according to a news release.

Described as a first-of-its-kind brewery incubator, Pilot Project assists start-up breweries with fine-tuning recipes, production scaling, business development, marketing and distribution. The company said its expansion to the Milwaukee facility would further the growth potential for Pilot Project’s incubated brands and help support their national growth throughout the Midwest and beyond.

“Pilot Project was established to support creativity, diversity and innovation in an industry that often overlooks it or maintains unreasonable barriers to allow it,” Abel said.

Operations at Paper Table, a food hall and ghost kitchen downtown, are beginning to ramp up

A soul food restaurant has filed a license application and occupancy permit at Paper Table, 733-737 N. Milwaukee St. And the first restaurant to join the food hall, MilTex Kitchen, will have its grand opening this weekend, complete with a ribbon-cutting ceremony.

A restaurant called Taste of Life Soul Food, which already has a location at 724 S. Layton Blvd., is planning to open in early October at Paper Table. The restaurant, owned by Joe Rogers, serves breakfast, lunch and dinner with an emphasis on comfort foods like shrimp and grits, burgers, meatloaf, rib tips and baked chicken, plus traditional soul food sides and desserts. Taste of Life will offer an expanded menu at Paper Table, Rogers said.

MilTex Kitchen, which quietly opened in August, is gearing up for a grand opening and ribbon-cutting ceremony this Saturday, Sept. 17. Owner Raven Gee opened MilTex Kitchen as a food truck in Houston in 2019 and later expanded into Milwaukee, her hometown. An industry veteran, Gee has more than 20 years of restaurant and management experience. She previously owned Sista 2 Sista Soul Food and Catering in Milwaukee.

Yum Yum Fish and Chicken Planned for North Side

The owners of a new restaurant in Milwaukee’s Lincoln Park neighborhood hope to evoke the comfort of home-cooked meals in a fast-food format.

“That’s what we’re going to bring to the table,” said co-owner Myron Smith. “That Southern cuisine taste that our mothers, grandmothers and aunts have always cooked in the kitchen.”

Smith and his partner Jonathan Adams plan to open Yum Yum Fish and Chicken at 1912 W. Hampton Ave. A grand opening is scheduled for Sept. 28.

“We invite everyone to come down and taste some of the best fish and chicken on this side of heaven,” Smith said.

Clock Shadow Creamery, Milwaukee’s only cheese factory, will host a street festival in celebration of its 10-year anniversary.

Since its 2012 opening in the Walker’s Point neighborhood, the creamery has prioritized community and supported local businesses through tours, education and partnerships.

Squeak Fest will be no different. Vendetta Coffee Bar, which opened earlier this summer just down the block, will provide a bloody mary bar — a perfect pairing for Clock Shadow’s freshly made, and always squeaky cheese curds.

What To Expect At Festa Italiana

Festa Italiana will return later this month, stretching Milwaukee’s festival season to the end of September.

Scheduled for Sept. 24 through 25, the festival is back after a two-year hiatus, featuring the same food, games and entertainment as previous years, but in a scaled-down format.

The festival almost didn’t return this year, citing the financial impact of the COVID-19 pandemic. But later announced it would return, though instead of its typical location at the Summerfest grounds, it would take place in the fenced-in parking lot at the Italian Community Center (ICC), 631 E. Chicago St.

The smaller footprint will make for a much more intimate event. While the festival will have to forego certain attractions from years past, it will still feature numerous food vendors, musicians, performances and crowd-favorite activities like the bocce tournament and a cannoli-eating contest.

The Kennedy I, a four-story office building in downtown Milwaukee, could soon house a new tenant.

That’s according to a license application filed on behalf of Brick Wing Event Hall. Ranjit Singh and her sister, Kulbir Sra, would open a banquet hall and cocktail lounge on the first floor of the building, which also houses offices for the educational materials company 3D Molecular Designs.

The venue is expected to open March, 2023, and would be located in a in the 3,783-square-foot space on the ground floor of the building on Wells and Milwaukee, at 804 N. Milwaukee St.

The license application indicates that Brick Wing expects 40% of its revenue to come from alcohol sales. Entertainment including live music, karaoke, comedy acts, dance performances and poetry readings would provide the remaining 60%. The venue expects to host up to 100 concerts each year.

Named Servi, the cyborg assists the team at the downtown pizza parlor with simple tasks, allowing the staff more time to interact with customers. State Street Pizza Pub is located one block away from Fiserv Forum at 322 W. State St.

“We were approached by Bear Robotics a few months ago and they thought our floor plan, location, and menu would be ideal for their first robot in downtown Milwaukee” said owner Jake Dehne in a statement. “State Street Pizza Pub is the perfect destination to meet up with friends and family before or after a Fiserv or Panther Arena event, game day celebrations or late night pizza and now our staff can spend more time with customers instead of running dishes to the dishwasher or food to the table.”

The name Servi is a placeholder, as State Street Pizza Pub is holding a contest to find the ideal name for the robot. A lucky winner will receive free pizza for a month.

If you’ve been looking for a souvenir to remember Milwaukee Brewing Company, now’s the time to act.

The company, which was sold earlier this year to an unnamed buyer, is holding an online auction for the contents of the Milwaukee Ale House, 233 N. Water St., which closed permanently on Sept. 11.

The online auction began Sept. 1 and features nearly 800 items including commercial brewing equipment and restaurant wares, plus a large, decorative shark and what may likely be a lifetime supply of Heinz ketchup.

Space Time Coffee, a local roastery and cafe, will be leaving its space at Dubbel Dutch, 817-819 N. Marshall St. The business will continue to operate at the boutique hotel through Sept. 25.

Adam Sterr founded the business as a micro-roastery in 2020, the same year Dubbel Dutch opened its doors, but didn’t move into the hotel until October, 2021, when Space Time replaced The Daily Bird as the hotel’s cafe presence. Daily Bird now operates a cafe in Riverwest.

In a world of grind culture, optimization and never-ending to-do lists, coffee is often seen as a mere tool — an expedient accelerant to get through the next pressing task. A new downtown cafe resists that notion and invites customers to do the same.

Discourse Coffee — Downtown had its soft opening Sept. 17 in the heart of Milwaukee School of Engineering campus. The following Monday morning, guests at the cafe, 1020 N. Broadway, lingered over journals and engaged in quiet conversations, easing into the coming week.

Since its 2021 arrival in Milwaukee, Discourse has billed itself as an experience, a description usually reserved for cocktails more so than caffeine. The cafe now has three locations: a stand at Crossroads Collective, residency at Milwaukee Art Museum and the downtown space on the MSOE campus.

Owner Ryan Castelaz opened the first Discourse in Sister Bay in 2017 before relocating the business to his hometown, Milwaukee. He now operates Discourse with partners Sean Liu and Olivia Molter.

The community of Bay View, once an independent village and now Milwaukee’s largest neighborhood, was forged with the establishment of the Milwaukee Iron Company in 1867. The company town was annexed by the city in 1887. Well into the 20th century it had a pronounced Eastern European character, where every neighborhood tavern had polka tunes on the jukebox and a jar of pickled eggs on the counter, and most residents’ surnames still “ended with a sneeze.”

The pace of change was slow. In the 53207 ZIP code only about 650 housing units were built in the three decades spanning 1980 to 2009. Many more than that were built in the last decade alone with new projects continuing to be announced on a regular basis. The times, they are a-changin’.

The industrial workforce, which long predominated, has shrunken to just about 21% of the populace. The majority of the 37,103 residents have some college background, and an average age of 36. Although there are 3,552 households with children, the vast majority (12,919 households) have no children present; forty-one percent of adults living in Bay View have never been married. Factor in the separated, widowed and divorced and married folks here are in the minority.

These are fertile demographics, indeed, if you want to open a bar, which is most readily done in these parts by purchasing an existing one. Thus, we come to Clementines, formerly Swigs Pub & Grill, to witness how the transformation of a neighborhood is reflected in the gentle gentrification of a middle-of-the-block, third-shift bar now under new and savvy ownership.

Break out those wooden stakes — a “What We Do in the Shadows”-themed pop-up is coming soon to Bay View.

From Oct. 28 to 30, Lost Whale, 2151 S. Kinnickinnic Ave., will transform into Nadja’s, a fictional nightclub and choice hangout for a group of Staten Island vampires in FX’s mockumentary-style comedy.

Tripper Duval and Dan Beres are co-owners of Lost Whale and fans of the show.

“We’re just always saying quotes and making voices and just laughing about it all the time,” Duval said.