The story goes all the way back to 1993. Plus: A recap of the week's real estate news 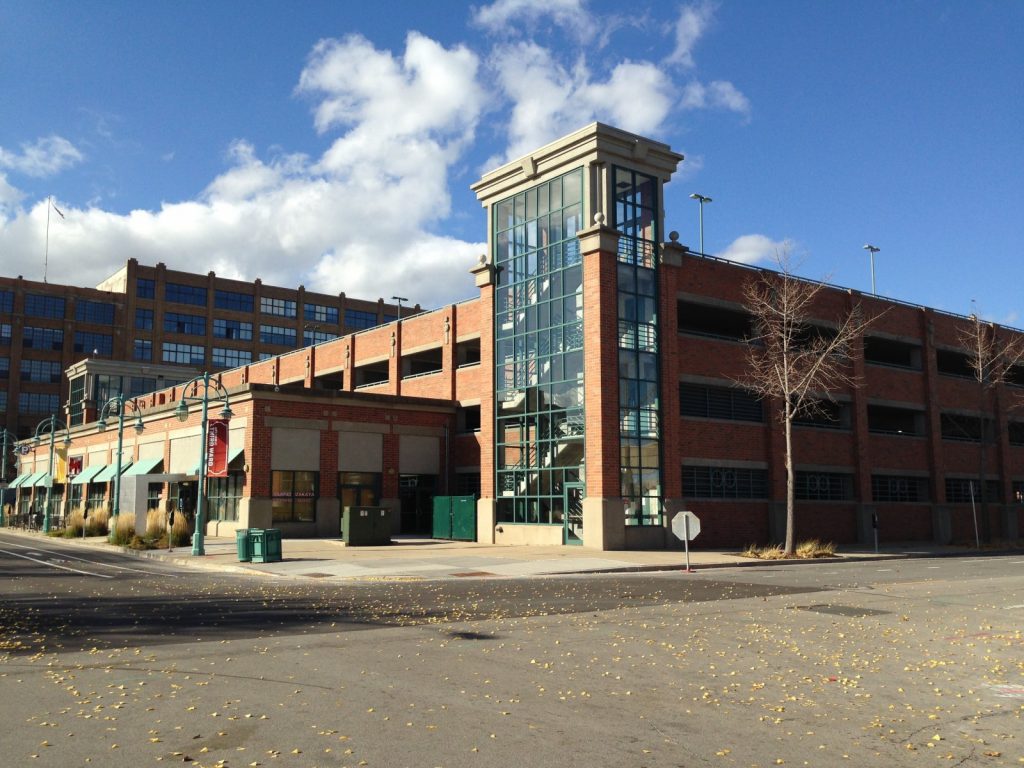 Bear Development has acquired an interest in a Historic Third Ward parking structure as part of its redevelopment of Johnson Controls‘ (JCI) downtown office complex.

The company purchased JCI’s 430,000-square-foot, seven-building office complex in October for $24 million. Over a period of two years, JCI is relocating the facility’s 1,300 employees to its Glendale campus. Bear is considering redeveloping the attached buildings into a mix of housing, office or hotel uses.

And this week, the Kenosha company grew its investment. Bear bought the land underneath the 550-stall parking structure, 212 N. Milwaukee St., and the associated lease for 192 daytime spots for $6.9 million.

The structure and approximately 5,000 square feet of commercial space (leased to Kanpai) continue to be owned and operated by the Historic Third Ward business improvement district. The district considered adding multiple levels to the structure in 2017, but that plan has not progressed.

Back door to back door, the office complex and parking structure are separated by two and a half blocks, allowing Bear to leverage the structure and its spaces in a future redevelopment plan.

Why does such a complicated legal structure exist?

It was all part of a decades earlier grand bargain that allowed Johnson Controls to expand its East Town office complex and Third Ward businesses to gain a parking structure.

Michael Horne, who now writes for Urban Milwaukee, broke the news on the Third Ward portion of the project for the Milwaukee Sentinel (where he was then a columnist) in November 1993.

By April 1993 the deal had crystallized. JCI would lease the 500-stall, city-owned garage at 535 N. Milwaukee St. for approximately $165,000 per year for 50 years in exchange for spending $6 million improving the structure. It would then lease a company parking lot at 212 N. Milwaukee St. to the Historic Third Ward Association for the development of a parking structure (and, in turn, receive free use of 192 of its 550 spaces).

Get a daily rundown of the top stories on Urban Milwaukee
The deal was seen as a subsidy to Johnson Controls. “It makes no logical sense to build it, but on the other hand businesses demand parking,” said Alderman Michael Murphy, who voted against the deal and is the only council member still serving from back then, in June 1994. Murphy previously had successfully instituted a two-year moratorium on new parking garage development.

“I agreed with the arguments that were made against it,” said then-mayor John Norquist, at the time. But he didn’t veto the agreement and said a light rail system would be needed to be built first to lure people out of their cars.

And in a case of what’s old is new again, the same June 27, 1994 Milwaukee Journal edition in which the JCI deal was discussed features Robert Bauman being critical of regional transportation planning.

Bauman, then a citizen activist, was critical of the lack of vision by the Southeastern Wisconsin Regional Planning Commission in creating a regional transportation plan. On Thursday of last week, now-alderman Bauman used his bully pulpit as Public Works Committee chair to be critical of the lack of urgency in planning to compete for federal infrastructure funds to expand regional transit. Current SEWRPC executive director Kevin Muhs, who was in elementary school at the time of the original complaint, was spared any direct criticism and provided information at the meeting.

But unlike the original light rail plan that would have had its northern terminus near N. Green Bay Ave. and W. Congress St. (Evergreen Station), the streetcar won’t come anywhere near JCI’s office complex in Glendale.

JCI announced in January 2021 that it would vacate its historic headquarters in downtown Milwaukee.

In recent years, JCI sold property immediately west of its downtown complex for $5.15 million. Those parcels now house three hotels that opened in late 2020. The company has also spun off a number of business lines, shedding thousands of employees.

The tallest building in the downtown JCI complex is seven stories tall. The oldest dates back to 1902. The property, addressed as 507-525 W. Michigan St., is currently assessed for $25.9 million.

JCI, in its current iteration, reports having approximately 105,000 employees on six continents. Approximately 2,000 of those employees will be working in the Glendale office after the downtown departure is completed.

Bear has a wide range of development experience. Just a few blocks west of the office complex, the company led the redevelopment of the Button Block Building, 500 N. Water St., into a Homewood Suites hotel. Going further west, it developed the 700 Lofts in a former office complex, 700 W. Michigan St. It secured low-income housing tax credits earlier this year to construct a new, affordable apartment building across the street. And it’s planning to redevelop the entire Filer & Stowell factory complex at 147 E. Becher St. in Bay View. In late 2021 Redevelopment Authority of the City of Milwaukee personnel said they expected news on the Bay View development in the coming months. 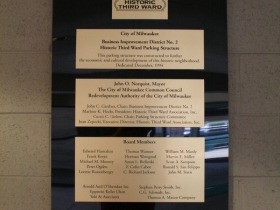 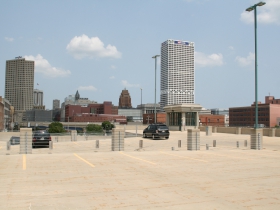 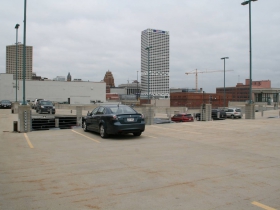 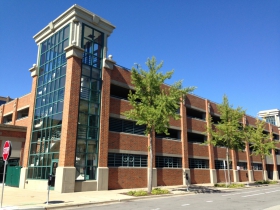 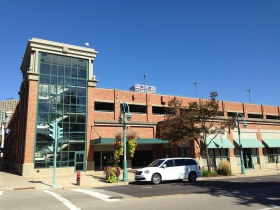 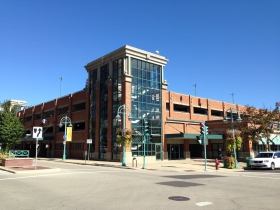 Construction is underway on a new credit union at the corner of S. Chase Ave. and W. Oklahoma Ave.

UW Credit Union will open later this year at 115 W. Oklahoma Ave., giving the organization a presence at the nexus of the Bay View, Tippecanoe and Polonia neighborhoods….

The credit union acquired the Bay View property in December for $2.15 million. Rams Contracting demolished the Arby’s restaurant at the site in recent months.

A commercial building near the intersection of S. Howell Ave. and E. Howard Ave. will see new life as an animal hospital.

The building became available when Lark Uniform, a supplier of government uniforms, closed its Milwaukee store and sold its remaining Oak Creek business to national uniform provider Galls. The Milwaukee property was listed for sale with Anderson Commercial Group in April 2020.

A new apartment building is set to rise on one of Milwaukee’s busiest commercial streets, but few might ever notice it.

Developer and contractor Nabil Salous is constructing the Layton Lofts apartment building behind a 10,000-square-foot building at 800 W. Layton Ave.

According to plans filed with the city, the Layton Lofts will be a two-story building with 14 apartments. Units are to include a mix of one, two and three-bedroom layouts.

Some people buy fixer-uppers to save money and create their dream house. Ashley George took that to the extreme. She ripped the second story off a commercial building and moved it nearly two miles.

Her business, Brew City Environmental & Restoration Services, was contracted to demolish the two-story building at 800 W. Layton Ave. in 2018. The longtime tenant, J. Roberts Porterhouse steakhouse, had been closed for years, and a new owner planned to develop a strip mall-style commercial building in its place.

But George’s father, Robert George, spotted something worth salvaging. After the building was originally completed in 1974 for Dietze’s Alpine Cellar, a second-story apartment was added. It was designed effectively as a ranch home placed atop the one-story restaurant.

Joseph Paterick, a resident of one of the cottages, filed an application to protect the homes on the east side of the 2500 block of Superior Street after one was sold in December 2020. The Historic Preservation Commission granted a temporary designation for the recently sold house in February, and then approved permanent designation for all seven in March.

But the Common Council, at the request of area Alderwoman Marina Dimitrijevic, held off on denying or affirming the commission’s decision in June. The temporary protection, which prevented unapproved alterations to the home’s exteriors for up to 180 days, expired in September.

The Edison, a proposed 15-story apartment tower, is moving forward.

An affiliate of The Neutral Project, the project developer, closed on the purchase of the 0.56-acre site at 1005 N. Edison St. for $4.12 million on Monday.

The riverfront site has been occupied for decades by a one-story warehouse belonging to wholesale florist Rojahn & Malaney Co., but was listed for sale in 2016. The Neutral Project will raze the warehouse and attached parking lot to create the development site.

In January 2020 three representatives of Frank Productions asked to meet with Leslie West and Joe Balistreri, co-owners of The Rave and the Eagles Ballroom complex.

“They wanted to buy us out,” West recalls, “and they would operate it. Their long-term plan was to tear down The Rave and Eagles Club and build at a new location.”

They also warned that if West and Balistreri turned them down they would put them out of business. In an interview with Urban Milwaukee, Joel Plant, CEO of Frank Productions, denied making any threat, but says “we’ve had a lot of conversations with Leslie.”

Walker’s Point Garage Could Be Transformed

Some might see a dilapidated garage on an industrial side street. Others might see a golden opportunity on a vibrant commercial corridor.

But it’s now listed for sale with Noël Real Estate Advisors for $299,000 and comes with plans for a two-story addition that would reorient the structure towards S. 2nd St.

Designed by Vetter Architects, the proposal would yield a two-story, 2,500-square-foot commercial structure on what has become Milwaukee’s restaurant row. Noël’s listing touts it as “the perfect location for a restaurant, bar or walk-up office space.”