More moves from one building to another. Plus: the week's nine real estate stories. 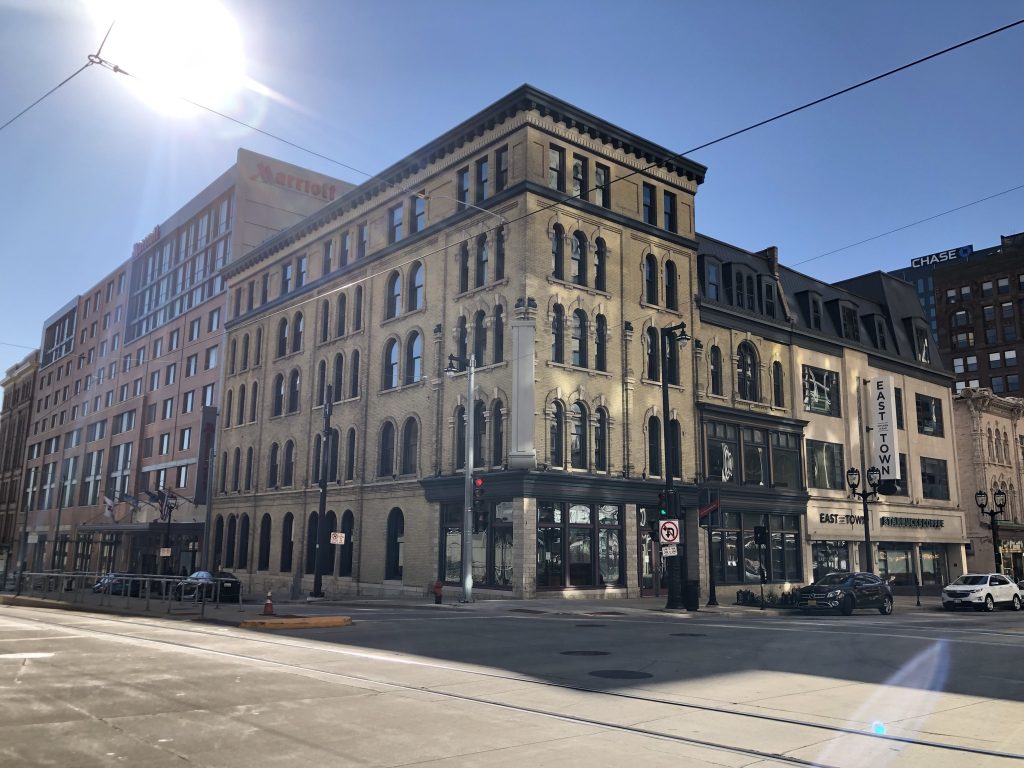 In September 2020, Urban Milwaukee wrote of the game of office space musical chairs that ensues when a new building is built Downtown. And the latest installment is rolling right along with no end in sight.

Kriete Group, a commercial truck dealership, will occupy the five-story, Italianate-style building at 329-331 E. Wisconsin Ave. You can trace that move back to Husch Blackwell‘s move to the Huron Building, located one block south of Kriete’s current home at 612 N. Broadway.

Husch Blackwell was revealed as the anchor tenant of the proposed Huron Building in December 2018. And the law firm made the move into 71,000 square feet of space atop the new building in Oct. 2020, vacating its Cathedral Place home.

That created an opportunity for Johnson Financial Group to move in Oct. 2021 from its longtime Milwaukee home at 329-331 E. Wisconsin Ave. to the top of Cathedral Place, consolidating employees from an acquired lease at 100 East and relocating a first-floor branch bank in the process.

That move left Johnson’s Wisconsin Avenue office building empty and further emptied the 100 East tower, which was already in foreclosure.

Johnson, less than a month after vacating the building, closed on a transaction to sell the 17,000-square-foot property for $1.3 million to an investment group led by Michael Levine, who already owns property on the same block.

But Levine is not relocating his law office from 630 N. Broadway to the Cream City brick building. The investment group is instead selling the property to its neighbor, the Kriete Group.

If the Johnson Bank property had never been divided from the larger Follansbee Block building it was constructed to be part of back in 1867, Kriete could have relocated by simply walking down the alley. Instead, the firm will need to loop around the block, from its southwest to its northeast corner.

Get a daily rundown of the top stories on Urban Milwaukee
“We’ve more than doubled our size in the last three years and our corporate team is in need of a new home,” said firm president and CEO David Kriete in an emailed statement to Sean Ryan. “The historic Johnson Bank building is a perfect fit.” The company has reportedly been looking for a new home for five years, and a recent plan to redevelop a West Allis building as an office and showroom was rejected.

Kriete operates 10 dealerships throughout Wisconsin according to its website.

In 2020, the firm reported it had 30 people working in its current office, which, similar to its new space, is also divided from a larger historic building (the Lawrence Block). Roger Kriete is listed as the owner in city assessment records, acquiring it when the firm moved in 2013. The city lists the four-story property as having 13,440 square feet of finished space and a property value of $694,500.

A single user is the ideal configuration for the Wisconsin Avenue building, as Johnson Financial CEO Jim Popp told Urban Milwaukee in early October, noting that the building was difficult to lease to multiple tenants because of a central, open staircase. The building is wrapped by the Milwaukee Marriott Downtown hotel, prohibiting any lateral connections.

What comes next for Kriete’s current space? The firm hasn’t revealed. The game of musical chairs continues. 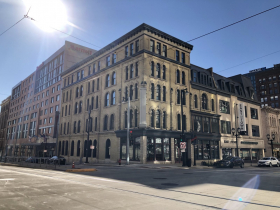 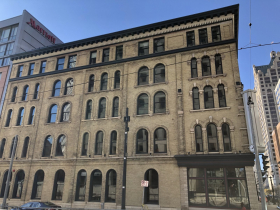 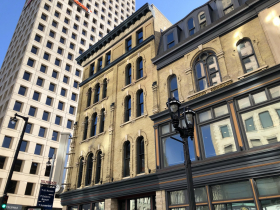 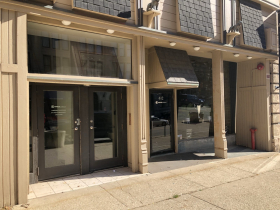 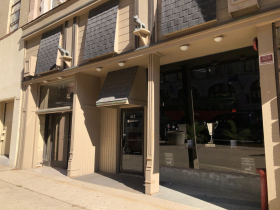 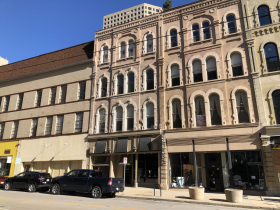 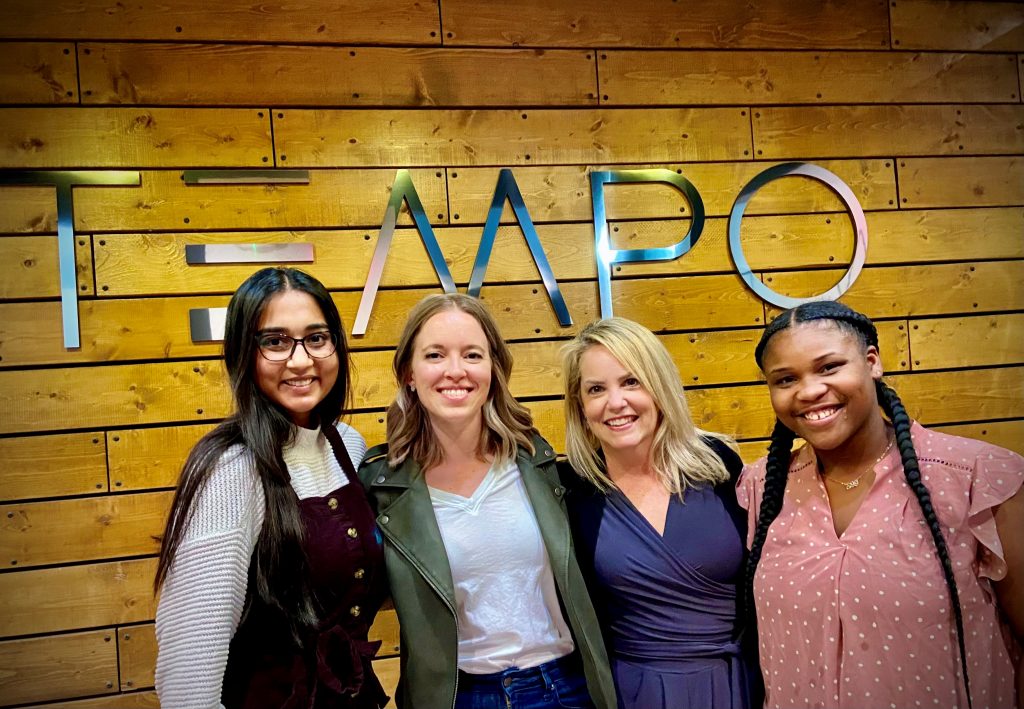 The TEMPO team at their open house. Photo from TEMPO.

TEMPO, Wisconsin’s largest professional women’s organization, hosted a grand opening party for its new office space in late October. The nonprofit is leasing 2,500 square feet of space on the second story of The Avenue complex at 275 W. Wisconsin Ave.

“The Avenue is the perfect location for our growing TEMPO team and membership base of nearly 800 executive and Emerging Women Leaders to gather, network and attend events,” said executive director Jen Dirks in a statement to Urban Milwaukee. “We are grateful to the many business and community partners who helped bring us home.”

The lease was first announced in August.

TEMPO leased space in Schlitz Park until May 2020 when its staff switched to a remote-work arrangement amidst the COVID-19 pandemic. Its website lists five current staff members.

The nonprofit worked with Jones Lang LaSalle to find the space and Eppstein Uhen Architects on the design.

The collaborative effort that led to the redevelopment of Old Main at Soldiers Home was given a prestigious historic preservation award Thursday evening by the National Trust for Historic Preservation.

The announcement comes a decade after the National Trust placed the Civil War-era Old Main building on its list of the 11 most endangered historic buildings in the United States.

If you didn’t know better you might think S. 5th St. in Walker’s Point was soon to be home to a new aquatics center.

A crew from Catalyst Construction has cleared a half block of buildings. The empty pit that remains is lined by white walls, and almost looks like a swimming pool.

But the concrete columns projecting from the eastern edge aren’t a base for diving boards. They’re support structures for a six-story apartment.

The Mandel Group is developing the 144-unit Taxco Apartments between W. Bruce St. and W. Pierce St. It will replace the west side of a block best known for its longtime tenant La Fuente.

The Federal Home Loan Bank of Chicago announced 49 affordable housing projects in Wisconsin and Illinois will receive a combined $29.2 million in grant funding. That includes seven projects in Milwaukee.

The funding, which is often paired with larger funding sources to advance a project, is awarded as a grant. FHLBank Chicago, a federal government-backed, membership-based institution, contributes 10% of its annual net earnings to housing programs.

Winning projects include Bear Development‘s redevelopment of the Filer & Stowell complex in the Harbor District. That project, 147 E. Becher St., is ultimately intended to include 300 units of housing, but the $1.8 million award from the bank will support redevelopment of the first two buildings totaling 139 units. The funding will come via First American Bank and be provided to project nonprofit partner CDA Housing Inc.

A 99-year-old funeral home on Bay View‘s main street could soon be no more.

It will no longer be a hotel with a 14-story addition, but a 22-unit apartment building. Ascendant Holdings secured approval in 2017 from the Historic Preservation Commission to develop the hotel, but the project never secured financing to advance.

Now, Northfield, IL-based Saxony Capital stepped in to lead the apartment project. The apartments in the building would range in size from 1,500 to 2,500 square feet, containing two or three bedrooms. Some would have multiple levels.

LISC Milwaukee is looking for entrepreneurs and building owners in need of financial or technical support. Its Brew City Match program is again accepting applicants for its fourth round of grant awards.

The program, backed by a $3.5 million grant from Chase, is focused on small business development and commercial property revitalization in the city’s historic commercial corridors.

“Brew City Match is about supporting entrepreneurs while creating vibrant commercial corridors to build a more inclusive local economy” said LSIC program officer Celia Benton in a statement. “We look forward to supporting former winners and meeting the next round of applicants.”

Sas-Pérez Appointed to WHEDA Board

The head of a south-side community organization is joining the board of Wisconsin’s most influential affordable housing funder.

VIA CDC executive director Brianna Sas-Pérez was appointed by Governor Tony Evers to a seat on the Wisconsin Housing and Economic Development Authority.

“Over the course of the pandemic, it’s become even more critical for us to connect the dots between safe, affordable housing and the health and well-being of our communities,” said Evers in a statement. “Brianna Sas-Pérez understands this well, and her breadth of experience working to close inequities and serve her community will make her an excellent addition to the WHEDA board.”

Alderman Russell W. Stamper, II is concerned that construction projects are disturbing rat nests and sending the rodents scurrying about his district.

“Since I’ve been the alderman in the district I’ve always had concerns and I’ve always received a lot of calls about rats that infiltrate the area after a development,” said Stamper to members of the Zoning, Neighborhoods & Development Committee on Oct 26. “The last few times it has gotten out of control. Residents are calling me left and right about the infestation of rats in their neighborhood.”

He said he first noticed it when the St. Ann Center for Intergenerational Care was constructed at 2450 W. North Ave. The facility opened in 2015.

A new Planet Fitness gym could be coming to Milwaukee’s far Northwest Side.

An affiliate of Black Duck Partners (BDP) purchased a portion of the property at 7401 W. Good Hope Rd. The remainder of the site includes a Pick ‘n Save grocery store.

An affiliate of BDP paid $1.1 million for the 0.89-acre Good Hope Road property according to state real estate records. BDP was represented by Mid-America Real Estate Group brokers Tony Colvin and Adam Dreier in the transaction according to a press release from the brokerage.