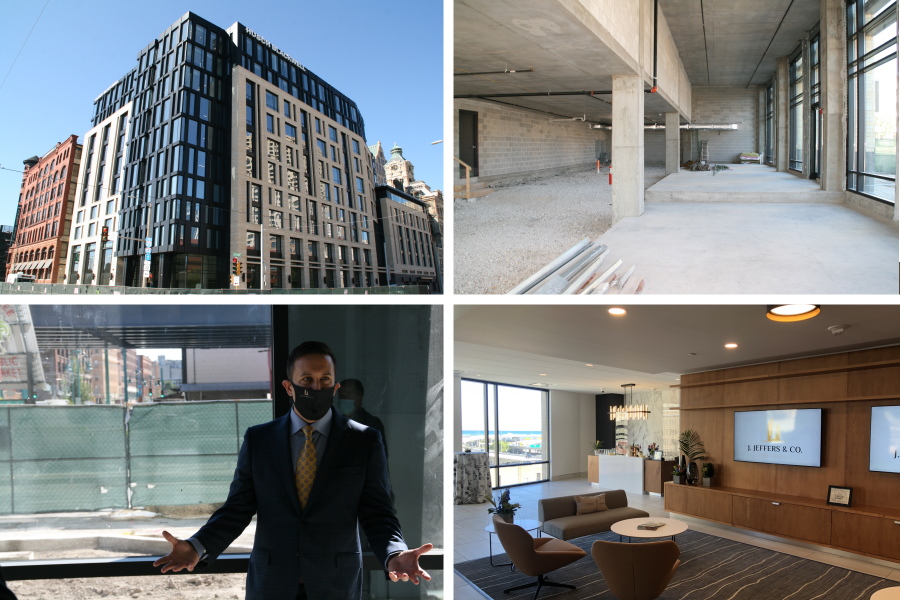 Its location, along E. Clybourn St. and Interstate 794, makes it a bridge between the Historic Third Ward and East Town neighborhoods.

Its stone cladding helps it bridge the city’s history. The stone comes from the same quarry as the adjacent Mackie Building, built 140 years earlier. J. Jeffers & Co. redeveloped the Mackie, and adjacent Mitchell Building, in the past decade. The Huron serves as a capstone to the transformation of the block.

Developer Joshua Jeffers showed the building off Monday afternoon, hosting members of the media for a small tour and then an afternoon event for project stakeholders and prospective tenants.

The building’s anchor tenant, law firm Husch Blackwell, will occupy the top three floors, 71,000 square feet in total, and move in later this month. The firm’s space includes three private 800-square-foot balconies with views of the skyline and Lake Michigan.

The building is opening a month ahead of schedule, a rarity in the pandemic. The secret? “Driving a lot of piles,” said Jeffers. In 2019, general contractor Stevens Construction worked with Jeffers to use four pile drivers seven days a week to construct the foundation on a shortened timetable. The move cut the amount of time required by four to six weeks said the developer.

While the Huron Building, named for Clybourn Street’s pre-1932 name, replaced a surface parking lot, it’s not the first building on the site.

The pile drivers found that history. Jeffers noted that the hollow sidewalks found in Downtown were often filled with rubble from smaller buildings that once lined the block. When pile drivers hit those materials, they punch quickly through it. When they hit an old foundation, things don’t move, which can be an expensive mistake. Fortunately they mostly hit rubble.

The final result is many layers tightly orchestrated together.

Get a daily rundown of the top stories on Urban Milwaukee
“Every inch matters,” said Jeffers, detailing different changes to fit the building on the 0.66-acre site. Six stories of office space, on floor plates up to 28,000 square feet, sit above five levels of parking. Engberg Anderson Architects designed the building.

A lobby opens up to N. Broadway, with the parking garage recessed to create a five-story light well. The space includes a staffed concierge desk and elevator well that whisks guests up to an amenity level.

A tenant lounge serves as the true welcoming space on the eighth floor, with a 3,000-square-foot outdoor terrace and indoor seating area with lounge furniture, televisions and bar. An approximately 2,000-square-foot fitness center is included on the floor, as are two leasable office spaces from 6,000 to 12,000 square feet in size.

Two other floors, each with 28,807 square feet of leasable space, are available for future tenants just below the amenity floor.

The outdoor terrace is intended for office tenants, but is also available for lease as part of events at the adjacent Grain Exchange in the Mackie Building. J. Jeffers & Co. built an indoor link between the two properties.

Parking is also to be time shared. While the office tenants will use the 240 stalls during the daytime, Grain Exchange events, Mackie Flats residents and Homewood Suites hotel guests (located in the adjacent Button Block building) can all use the garage in off hours.

“Having this incredible space helped us get [Tupelo Honey],” said Jeffers.

Jeffers and Tupelo Honey Southern Kitchen & Bar announced the new restaurant, the national chain’s 18th location, on March 12th, the day before Milwaukee had its first COVID-19 case. The restaurant planned to open in October.

The pandemic then killed all of Tupelo’s expansion plans. But Jeffers and Tupelo reconfigured the terms and timeline to bring it back.

“We were slowly able to put the pieces of our deal back together with them,” said Jeffers. The developer said he views the restaurant as a key piece of the connectivity between the Historic Third Ward and Downtown. Changes to the lease were around “economic terms” said Jeffers, noting that things related to build-out costs and when payments start were adjusted. “They have been a great partner. They have been incredibly transparent with us.”

The restaurant is now expected to open in spring 2021.

Will J. Jeffers & Co. survive the pandemic and stave off its creditors if Husch Blackwell and Tupelo are the only tenants for the foreseeable future? Yes, said Jeffers.

Much of that is due to the building’s unconventional financing structure that relies less on debt. Jeffers raised approximately $14 million in crowdfunding investments via the CrowdStreet, including $10 million in the first 80 minutes the deal was available. The $60 million project has 427 investors in total with $21 million in equity.

“The volume of people looking is less than it would be in normal times,” said Founders 3 broker Ned Purtell.

But Purtell is optimistic things will bounce back. “It’s going to double up,” said Purtell of the many tenants signing short-term extensions to wait out the pandemic. “We should have a lot of activity.” Founders 3 handles the office leasing, Newmark Knight Frank is handling the retail leasing.

A leasing brochure pitches the theme of connectivity for the project. The location has a Walk Score of 98, is served by 11 nearby bus routes, 12 Bublr Bikes stations, direct freeway access (and a 13-minute drive to the airport) and the adjacent streetcar. “Trendy Third Ward meets corporate Downtown,” says the brochure.

That connectivity will get a boost in the coming years. A $3.8 million proposal, using incremental property tax revenue generated by the building, will fund street paving, streetscaping, traffic signal upgrades, utility work, public art, lighting improvements and bike amenities. Jeffers is fronting the funds and will be repaid from increased property tax revenue from the Huron, Mackie, Mitchell and Button Block buildings.

A portion of the Brighten the Passage art project was completed last month. Some of the streetscaping improvements will become visible as the Huron construction fence comes down. 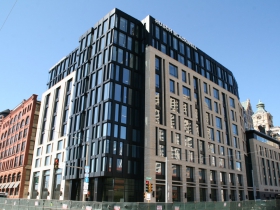 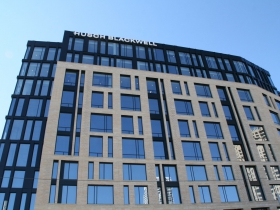 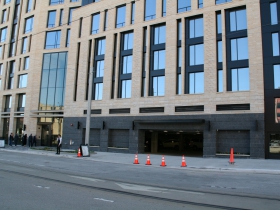 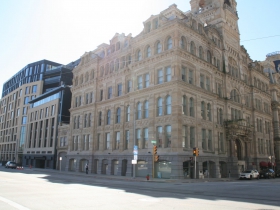 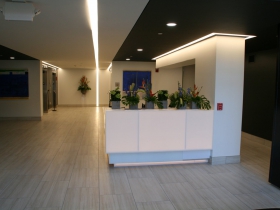 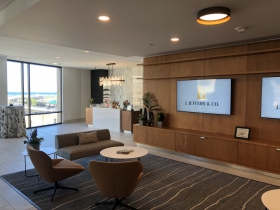