Hilton announced Monday that the hotel was one of 11 for which it had signed development agreements.

Proposed for what was a surface parking lot used by the Milwaukee Journal Sentinel at the northwest corner of N. Old World Third St. and W. Kilbourn. Ave, the hotel would be developed by a partnership of FirstPathway Partners and HKS Holdings.

Hilton says the hotel is one of 55 slated to open in the next 10 years as part of its “lifestyle” category. The category includes the Canopy, Motto and Tempo brands.

The Tempo brand is the latest offering from the chain. Construction on the first hotel sporting this label broke ground in Louisville, Kentucky in March 2020. It is billed as an “elevated lifestyle brand” with approachable, upscale amenities that help guests relax and recharge. Each hotel will feature fitness equipment from Peloton.

Joining the proposed Milwaukee hotel are new hotels in Bentonville, AR, Boston, New York City, Seattle, Guadalajara, Mexico City and Tulum in Mexico and Rotterdam, the Netherlands. The hotel chain expects to double the number of lifestyle hotels it offers in the next five years.

A prospective investment deck for the Milwaukee hotel pitches its proximity to Fiserv Forum, the Wisconsin Center and other Westown neighborhood amenities.

Get a daily rundown of the top stories on Urban Milwaukee
HKS, with FirstPathway Partners, is pursuing $21.6 million in EB-5 financing for the $48 million project. The EB-5 program, as of new 2019 regulations, allows foreign nationals to obtain a green card in exchange for a $900,000 investment that creates 10 permanent jobs in a “targeted employment area” where the census tract or those directly adjacent have an unemployment rate in excess of 150% of the national average.  The investment description estimates the creation of 513 total jobs, including 188 directly in the operation of the hotel and restaurants. Other jobs would be created indirectly by the hotel’s construction and operation.

Census tracts used to create the targeted employment area include the one encompassing the property in Westown as well as one consisting of most of the Menomonee Valley and another encompassing the King Park neighborhood just west of The Brewery District and Interstate 43. The unemployment rate in the latter two tracts is more than 12%.

FirstPathway is led by Robert Kraft, and HKS, who have collaborated on a number of projects using EB-5 financing, including the nearby Aloft Hotel (1230 N. Old World Third St.), Kimpton Journeyman Hotel in the Historic Third Ward and the Global Water Center in Walker’s Point. With other developers, FirstPathway has also been involved in financing BMO Tower, Milwaukee Marriott Downtown and a handful of other projects across the country. It reports doing more than $1 billion in deals.

The project site is part of a full-block site acquired by J. Jeffers & Co. in late 2019 from Milwaukee Journal Sentinel parent Gannett. The newspaper relocated to leased space in late 2020, and the developer has advanced two apartment projects. The signature Journal Communications Building, built in 1924, is being redeveloped into 103 market-rate apartments. The second project, immediately north of the hotel site, will create 77 apartments for students of nearby Milwaukee Area Technical College from a 1962 addition to the Journal building. Both projects are collectively known as Journal Square Lofts.

The Tempo hotel would be the second hotel under development west of the river. The Milwaukee Bucks, with partner North Central Group, announced a Marriott Autograph Collection hotel for 420 W. Juneau Ave. in September. We reported on a planned new Marriott hotel for the south end of the Historic Third Ward in January.

A boutique hotel, known as the Adams Hotel, is under construction near Cathedral Square Park. A couple blocks southwest of this a 32-room hotel, Kinn MKE Guesthouse, is being developed from the four-story office building at 602-606 N. Broadway. A trio of hotels, including two midscale Hilton brands, opened in late 2020 in East Town. 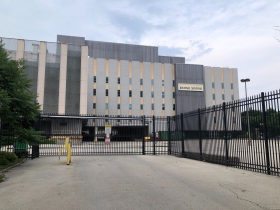 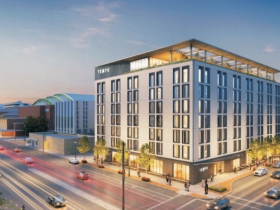 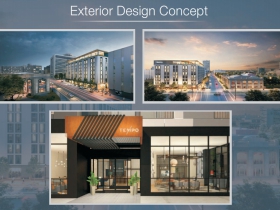 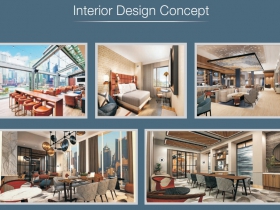